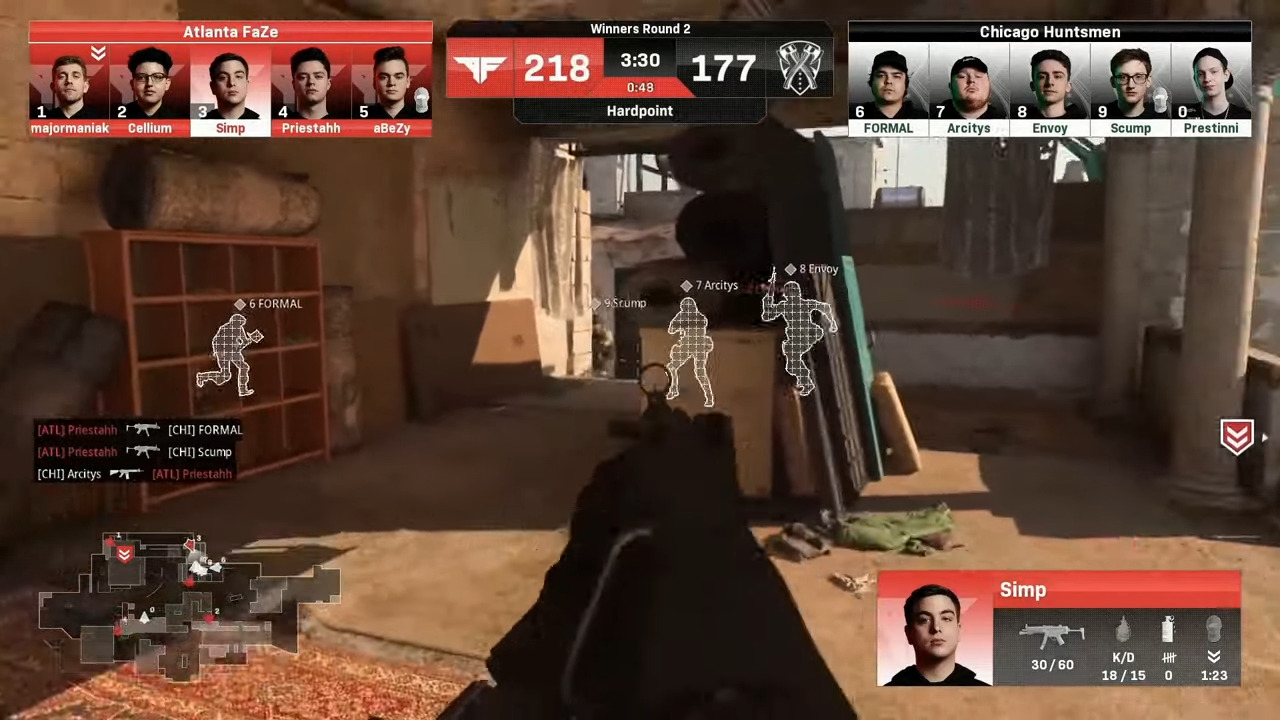 Two of the highly-skilled and fan-favorite teams battle it out in the 2020 Call of Duty League Playoffs. Perhaps the most awaited rematch between the Atlanta FaZe and the Chicago Huntsmen did not disappoint fans as both teams performed superbly in a grueling 3-2 series. As Cellium and the rest of FaZe Clan sends the Huntsmen back to the drawing board and the lower bracket of the playoffs, the top-seeded team is now one match away from the coveted Finals of first-ever CDL.

As both teams are some of the highest rankings in the regular season, namely first and fourth places, the build-up for this match is unparalleled as they try to dethrone each other in the winner’s bracket series. The squads only faced each other once before this playoffs. On this five-game series, however, FaZe overcome their foes to advance and wait in the winner’s bracket.

They knock Chicago @Huntsmen down to the elimination bracket after the epic 3-2 series win!#EZAF | #CDLPlayoffs | #CDL2020 pic.twitter.com/oKXigxquy1

The official Call of Duty League Twitter account warmingly welcomes the victors for the next weekend that awaits them, “They [Atlanta FaZe] knock Chicago Huntsmen down to the elimination bracket after the epic 3-2 series win!”

During their only regular-season facing, the results were much different than the recent one. The Chicago Huntsmen demolished FaZe in clean sweep fashion from the New York Home Series. Proving that they can adjust and adapt their playstyle, the Atlanta Esports Ventures-owned team stunned the opponents on what is a critically more important match up.

On game one, Atlanta reigned on Rammaza Hardpoint with a 73-point win but were unable to hold a grasp on the following Arklov Peak Seach and Destroy. Over games three and four, the teams would go back and forth and trade points to make an even 2-2. Heading into game five, it is nearly impossible to predict who would win between the committed squads. Though the Huntsmen did what they do best, FaZe’s MajorManiak puts an end to the series with his 12-kill performance as they emerge as victors 6-4 in the game five map.

Atlanta FaZe is now guaranteed to finish at least in third place and a chance for a spot in the inaugural season of CDL Championship.

As for the Chicago Huntsmen, they are not out of the competition just yet, though they now sit in the loser’s bracket. This means that to claim their seat in the Finals, the team will need to win three consecutive playoffs series without dropping any of them. They face next whoever wins between the Florida Mutineers and OpTic Gaming Los Angeles.

The CDL Championship Weekend happens this August 29 and 30 to crown the league’s first-ever champion.

May 26, 2021 Harry Alston 1790
The ban waves continue across Call of Duty, though this time it's not for hacking, but for racial slurs in IDs. For anyone that has played any of...

May 13, 2021 Harry Alston 2420
Yesterday it was reported across multiple outlets that Call of Duty 2021 may well sacrifice its multiplayer experience in favor of the continued...

Jan 24, 2021 Kenny Kimberly 2770
Earlier today we discussed the dismantling of Blizzard's Classic Games division, Team 1, and the merging of a subsidiary of Activision into the...