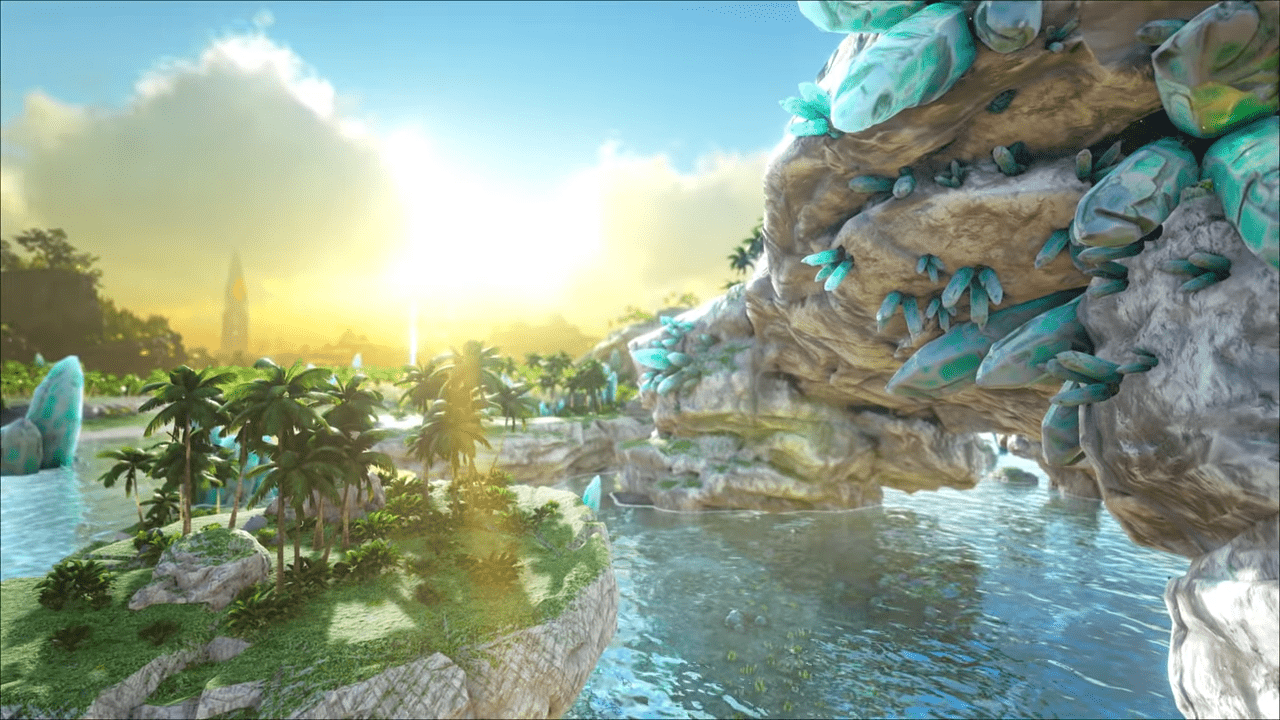 What started as a community endeavor to bring a bit more variety in the common, yet quite literal, stomping grounds in Studio Wildcard’s wildly successfully ARK: Survival Evolved has gotten the royal treatment from the developers themselves.

The map, as we’ve discussed at length prior, is Crystal Isles, and it’s now out as a free download for anyone who wants to intake a bit more color and fantasy in the landscapes found within ARK. Server admins can migrate their servers over to the new map, or you can go it alone in single-player on the new map after you’ve downloaded it within Steam.

The map has gotten a bit of polish from Studio Wildcard themselves; not saying that it was poor in any form prior, but to ensure that there is a limited number of problems with meshings and compatibility before Studio Wildcard pushed the map live.

Crystal Isles is a gigantic map weighing in at 150 square kilometers.

For comparison, The Island (the standard ARK: Survival Evolved map) encompasses roughly 40 square kilometers, and The Center (another similarly-themed fantasy map) is at 70 square kilometers. Get comfortable in the seat of your favorite Pterondon, because you’ll be exploring everything that Crystal Isles has to offer for weeks, if not months.

With Crystal Isles comes four separate special biomes as well that dot the landscape, complete with rainforests and volcanos, floating isles that defy physics while offering transcendent views, and vibrant landscaping that may make your eyes slightly uncomfortable.

Along with the map comes a brand new dinosaur called the Tropeognathus, and it’s a sight that will either inspire or horrify, depending on which side you find yourself on.

The Tropeo is much like a Pterondon, although it’s faster and a bit more agile in the sky; a desirable mount for higher-level players, even more so considering its home (The Crystal Isles) is so gigantic.

Along with that comes a saddle that can be outfitted with a jetpack, ensuring that your flights are faster than ever before, and a built-in flak cannon allowing the pilot to make short work of anything that so much as offers a sour look in their general direction.

If you’ve played Crystal Isles in the past, you’ll likely want to reset your entire save game before you jump into the official Crystal Isles experience, unfortunately. Steam boards for ARK are littered with discussions of users having difficulty playing on the official Crystal Isles map after playing the mod; The general consensus on recommended action is to simply remove everything dealing with the mod before installing the free DLC, and starting fresh.

Feb 7, 2021 Lisa Nguyen 11980
During The Game Awards, Studio Wildcard announced ARK: The Animated Series. The show is based on the dinosaur series but won’t debut until 2022....

Dec 14, 2020 Jeremy Green 5570
There haven't been that many dinosaur games to choose from over the last few years. That's a shame because these games have their appeal. You get...