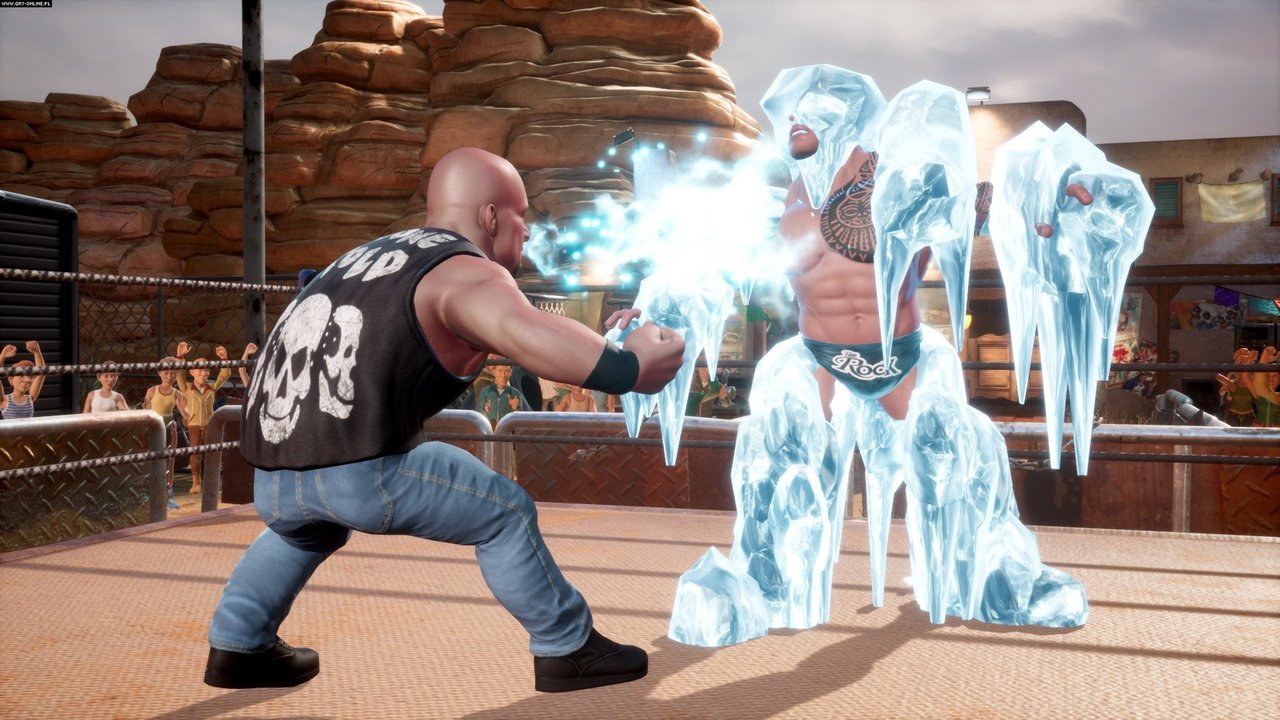 In addition to 2K confirming that their annual WWE sim won’t be released this fall, saying that they’re shifting their focus to 2K22 after the 2K20 disaster, the longtime developers of the annual pro wrestling game revealed this year’s project: WWE 2K Battlegrounds, which, judging from the trailers, looks similar to WWE All-Stars.

Aside from releasing a few trailers, 2K hasn’t revealed much about their upcoming arcade-style wrestling game, but some new screenshots showed off some of the game’s roster, which includes both current and ex-wrestlers, as well as some signature moves.

You can check out all of the new screenshots in the video below.

The screenshots also confirmed that he following current stars and legends will be included in the game.

The signature moves in WWE 2K Battlegrounds are just as over-the-top and cartoony as you’d expect them to be in an arcade-style wrestling game, as legends like Steve Austin can freeze opponents with his “Stone Cold” ice breath, while other legends like The Rock will be equipped with a flaming hot People’s Elbow.

While it hasn’t yet been confirmed by the developers, it’s likely that every wrestler included in 2K Battlegrounds will have an over-the-top, superpowered signature move.

As of this writing, we still don’t know what kind of modes will be included in WWE 2K Battlegrounds, but one would hope that there’s more to it than what’s been included in the NBA Playgrounds series, which just features a standard season mode, but is largely based on online matches, with very little single-player content. Also, the NBA Playgrounds series does feature VC, which is used to unlock card packs that give users up to five new players, and/or cosmetic items for the players that are already unlocked.

Given that WWE Battlegrounds is also a 2K game that, like NBA Playgrounds, is being developed by Saber Interactive, people shouldn’t be surprised if the game is filled with microtransactions. So, be prepared to grind to unlock the game’s full roster if you’re not interested in paying extra to unlock it in its entirety.

With WWE 2K Battlegrounds scheduled to be released in just two months, the developers should be dropping more details in the coming weeks, the biggest of which will probably be the game’s full roster reveal.

CD Projekt Red Says They're Competing With Themselves After Setting The Benchmark With The Witcher 3: Wild Hunt