Riot Has Released a New Champion: Aphelios, the Weapon of the Faithful 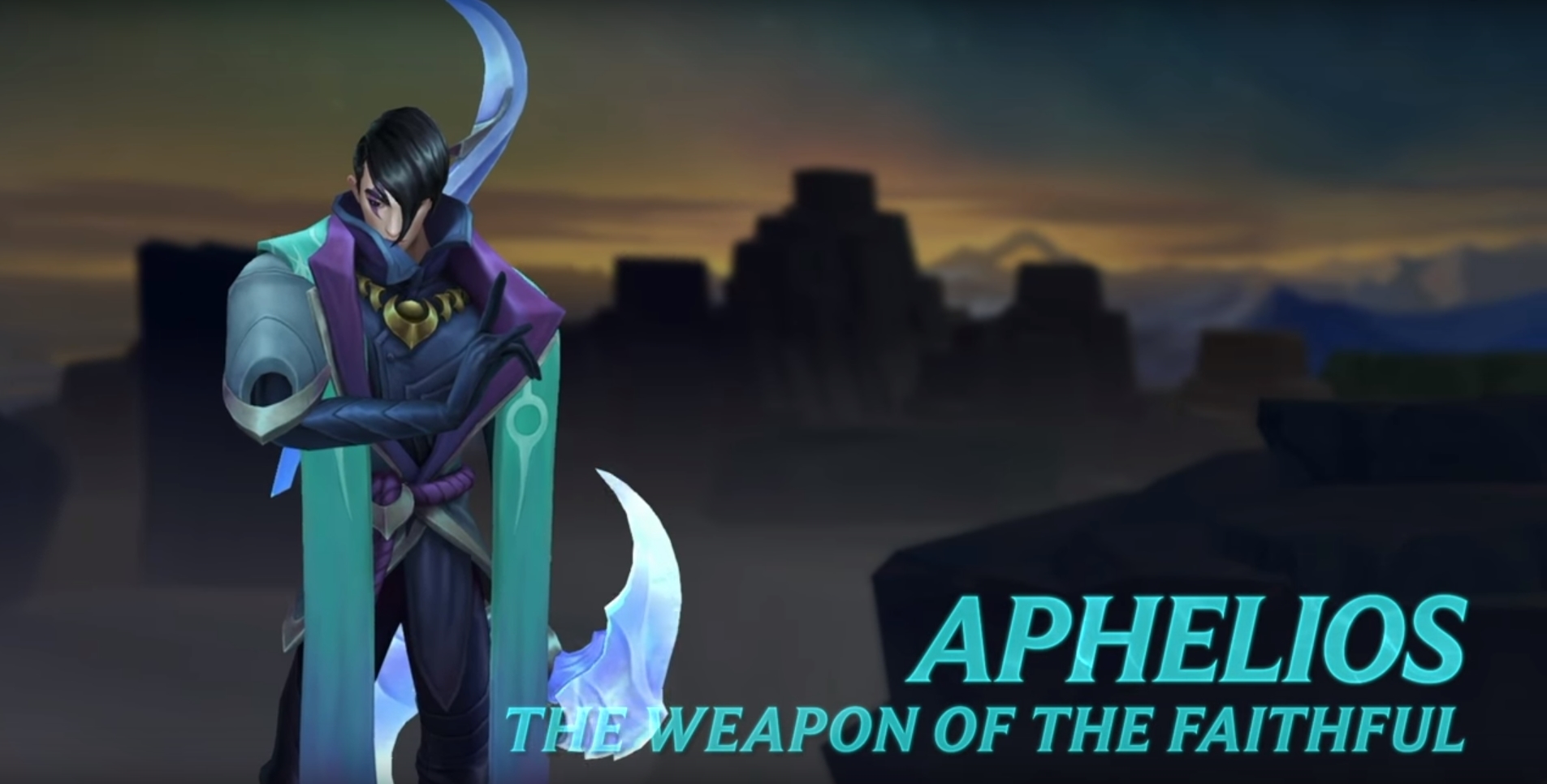 Riot has added a new champion to the game, the long-awaited edgelord himself, Aphelios, the Weapon of the Faithful.

On the surface, Aphelios seems like he might be one of the most complicated champions added to the game. Riot themselves refer to him as having “one of the highest skill ceilings in the game” on his champion kit primer, where they go through each and every one of his abilities.

The big brain, sad moon boi is almost here. Read all about the mysterious Aphelios on the Nexus: https://t.co/pn5uJ4UFh3

Rather than having four abilities like most champions, Aphelios eschews his third and replaces it instead with a weapon queue system. Aphelios wields five different weapons, each of which is cycled through as they run out of ammo. The weapons are as follows:

Calibrum, the Rifle: A poke/harass based weapon with extra range, Calibrum adds mark to enemies. This mark allows him to follow up with a basic attack from his off-hand weapon, which will also detonate other marks for bonus damage against the marked.

Severum, the Scythe Pistol: Severum is a more sustain-based weapon that heals for a portion of the damage it deals, converting the overhealing into a small shield.

Gravitum, the Cannon: Gravitum is more focused on utility than outright damage or lane-clear like the others are. Attacks with Gravitum apply a decaying slow to enemies, as well as rooting enemies affected by the slow.

Infernum, the Flamethrower: The flamethrower is, as you might expect, more focused on AOE/Waveclear than the other weapons are. Basic attacks with this weapon deal extra damage and explode into a cone behind the primary target, while the active ability spouts an AOE flame that then switches to your next weapon.

Crescendum, the Chakram: The chakram is close-ranged weapon that behaves similar to a boomerang, stopping Aphelios from attacking until it returns. Attack speed instead increases how fast the chakram returns to Aphelios.

As you can tell, there’s a lot going into the champion when the above is just the five weapons he can basic attack with. His ult, Moonlight Vigil, has a different effect depending on which of the five weapons you have equipped at the time.

Aphelios will primarily be an ADC, it seems, but given the massive variety in the ways that he can operate there’s a good bet that players will see him popping up all over the place. He’s out today, so expect to see a lot of players floundering around with his different guns and trying to figure out how exactly his overly-complicated kit works.

Detroit: Become Human By Quantic Dream Is Coming To The Epic Games Store Next Week

Latest Fallout 76 Patch, Update 16, Has Another Huge Flaw: It Breaks The Legendary Armor Within The Game

Sep 17, 2022 Michael Gunn 720
Several new cosmetics for League of Legends were revealed this week in anticipation of next week's big unveiling when the Spirit Blossom collection...

Jul 5, 2022 Tom Lee 2170
A new League of Legends champ is on the way, and she's begun her corruption campaign in an unexpected place - on the game's history page. Astute...