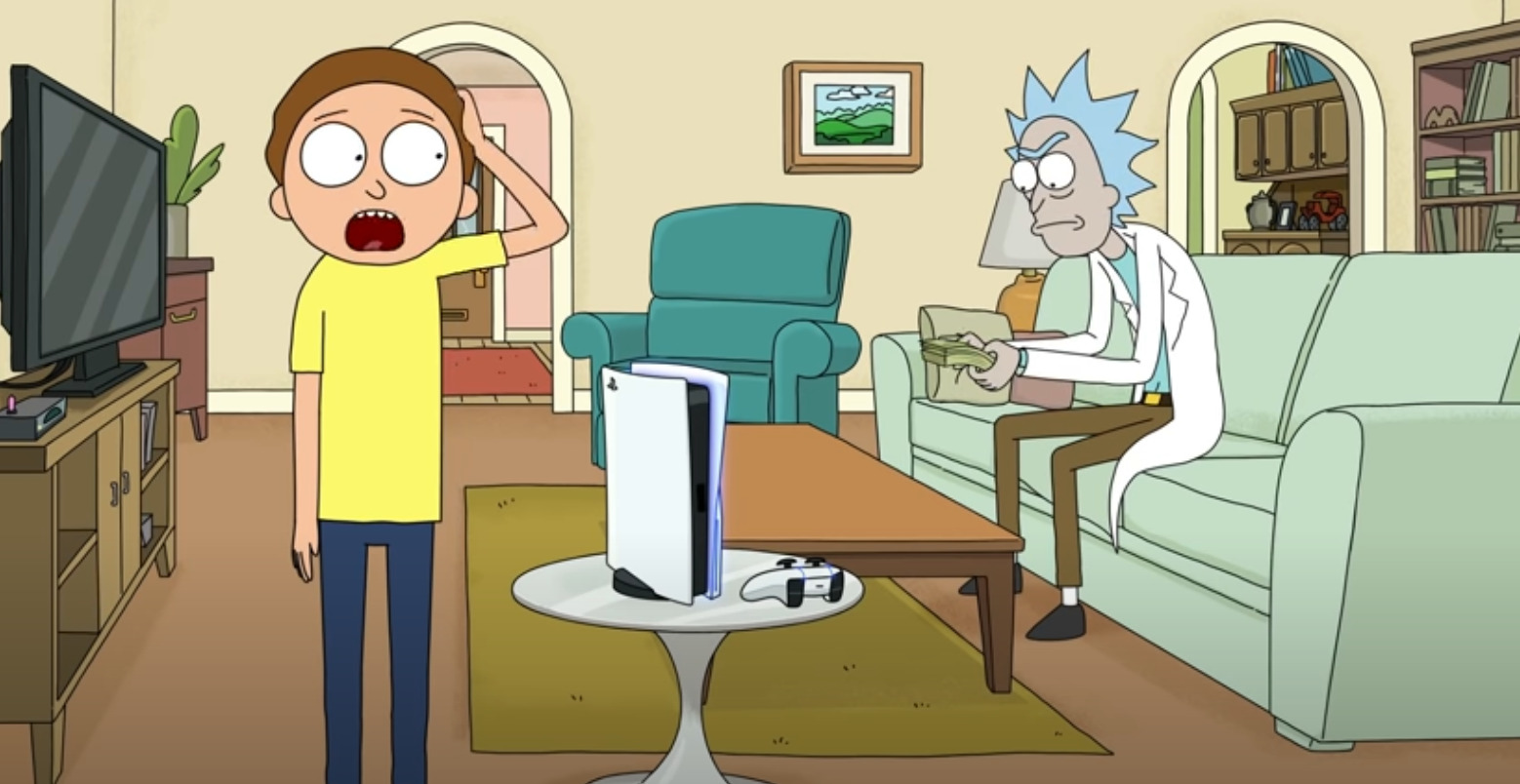 Crossover ads are always fun to see. But in the last few years, anytime the Cartoon Network Adult Swim series Rick and Morty has been hired to create a new commercial for a third party, it has been pure comedy gold.

That’s the case once more, as the duo stars in an ad for the new Sony PlayStation 5 console.

RELATED: Some New Details Have Emerged On Sony's PlayStation 5; Including A More Power-Friendly Design

Morty is in the foreground hocking the PlayStation 5, talking about all of its amazing features. Meanwhile, Rick is in the back on the couch, seemingly counting all of the money Sony paid them to sell its new signature console.

“This is the PlayStation 5, it’s really fast,” Morty starts to say, before Grandpa Rick interjects.

“Yeah, they really wanted you to mention the speed, that was really important to them,” Rick dryly ads.

Morty goes on to talk about some of the features while accidentally standing in front of the console.

“Morty, don’t block the console, they wanted that in the shot,” Rick scolds.

Things start to get super meta when Morty laments that the commercial is getting pretty boring, as they’re just listing off a number of features.

Finally Rick ends the commercial with a series of bleeped expletives telling you to go play PS5.

The animated duo, known for their amazing adventures throughout space, also had a very famous commercial for the fast food restaurant Hardees Carl’s Junior. In that ad, Rick bursts into Morty’s room while he’s sleeping, accompanied by giant living versions of some of the restaurants more famous sandwiches.

The huge burgers then run rampant around Morty’s bedroom, spilling sauce everywhere, causing havoc, and even stealing some of his possessions.

Then you had a Wendy’s commercial where giant versions of Wendy’s breakfast items are stalking them on a subway train trying to strongarm them into doing a commercial.

A memorable Pringles ad also had Rick, Morty, and Summer trapped in an ad for the potato chips.

This wasn’t Rick and Morty’s first game-related commercial. They also starred in a commercial for Kojima’s Death Stranding, which came out one year ago this month.

They walk through the world of Death Stranding while talking about some of the more confusing elements of the story. They even joke about eating the baby in a jar from the game.

The PlayStation 5 released earlier this month to mostly positive reviews. The only real negative surrounding the new console is that it’s basically impossible to find. Pre-orders sold out almost instantly, and since its release, stores are not getting many in stock.

Feb 11, 2021 Lisa Nguyen 7130
Publisher Reef Entertainment has announced plans to launch Terminator: Resistance onto the PlayStation 5 this March. The new version will be named...

Dec 20, 2020 Lisa Nguyen 13550
The next-gen consoles, PlayStation 5 and Xbox Series S and X, are now officially out for those lucky enough to grab one during this busy holiday...