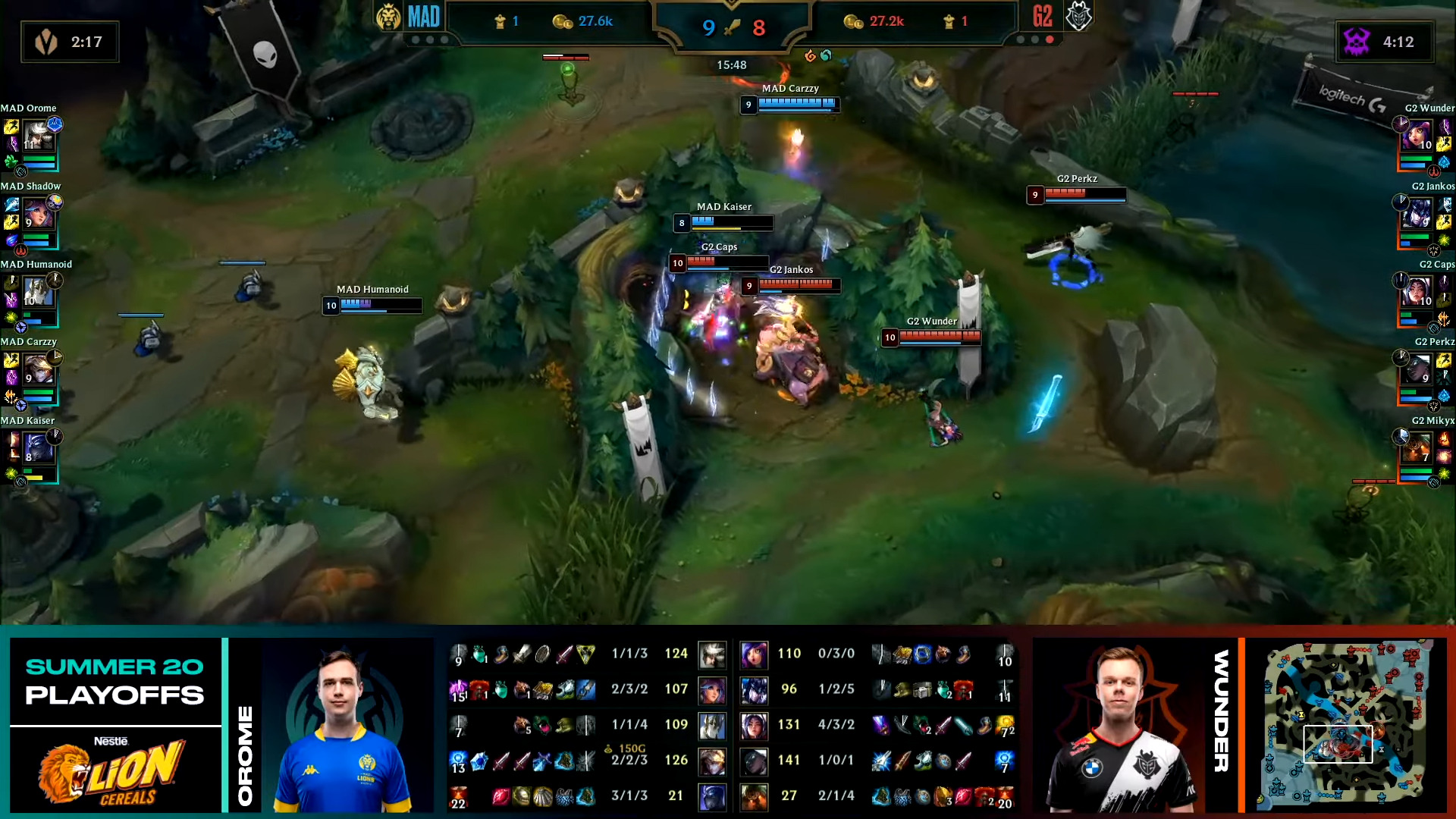 The League of Legends European Champions Summer Split this year is proving to be just as spicy as its North American counterpart. In today’s playoffs match, G2 eSports claim their spot for the game’s upcoming World Championship as they overcome the MAD Lions in a 3-1 fashion. The team’s mid laner, Caps, is named as the Player of the Series.

The series is highly competitive, with both teams going back and forth. However, G2’s Wunder and Caps held to their strategies and skills to outwork their foe’s laner counterpart. Top laner Martin “Wunder” Hansen picked a surprise Neeko to answer MAD Lions’ hero pick. With his usual carry mages pick like Syndra, Zoe, and LeBlanc, Rasmus “Caps” Winther dominated mid lane with a pocket Irelia to help aid him.

Right off the get-go, G2 proved they are about to take things seriously as soon as game one. Three minutes into the game, the victors took a gold lead, which would grow to an intimidating 16,000 gold lead by the end of the first game. G2’s merciless playstyle took over all neutral objectives of the match and did not yield a single turret to the MAD Lions. Game one was so commanding that it ended in just 29 minutes.

The Spanish team went back to their playbook for game two and adjusted their picks not to get bullied by G2. The Lions picked global ultimate champions to avoid the first game’s stomp and to answer G2’s map control playstyle. With a better understanding of the pace of the game, game two was more competitive, and the Lions tried to minimize G2’s aggression as much as they can. Unfortunately for Orome and the squad, Wunder’s clutch playstyle crushed their hopes to make the series even.

Entering the third game, MAD is on its reverse sweep psychology for their Worlds dreams. Jungler Zhiqiang “Shad0w” Zhao showed world-class and record-breaking performance on Lillia. The Chinese player showed superiority over his counterpart as he puts on the most creep score difference in contrast to the opponent’s jungler in a LEC Summer Split match. In an even shorter match than game one, MAD Lions scored their first point on the scoreboard going into game four of the series.

Kaiser and the rest of the Lions are on their way to a fifth and deciding match to crown the series’ victors. The team was playing superbly with coordination and timely global ultimates. They were locking down G2’s bot lane to try and get a long-term advantage. G2’s Perkz, playing Senna, was concentrated by the opponents on every possible opportunity making it difficult for the dedicated bot player. Midway through the match, it was almost sure the series would go the full distance.

But G2 has a different plan in mind. A conclusive team fight close to the bottom tower was executed and countered by G2 flawlessly to claim their 2020 World Championship spot.

Nov 6, 2020 Giorgio Delgado 3630
DAMWON Gaming took down G2 Esports in a dominant fashion in the 2020 World Championship semifinals today, getting revenge for being eliminated during...

Oct 18, 2020 Richard Sebastian 2800
The 2020 League of Legends World Championship has been cutthroat between the European and Asian regions. With just one more quarterfinals to be...