It’s Time To Eat The Rich In RimWorld Royalty; Update 1.1 Is Live With A Surprise Expansion 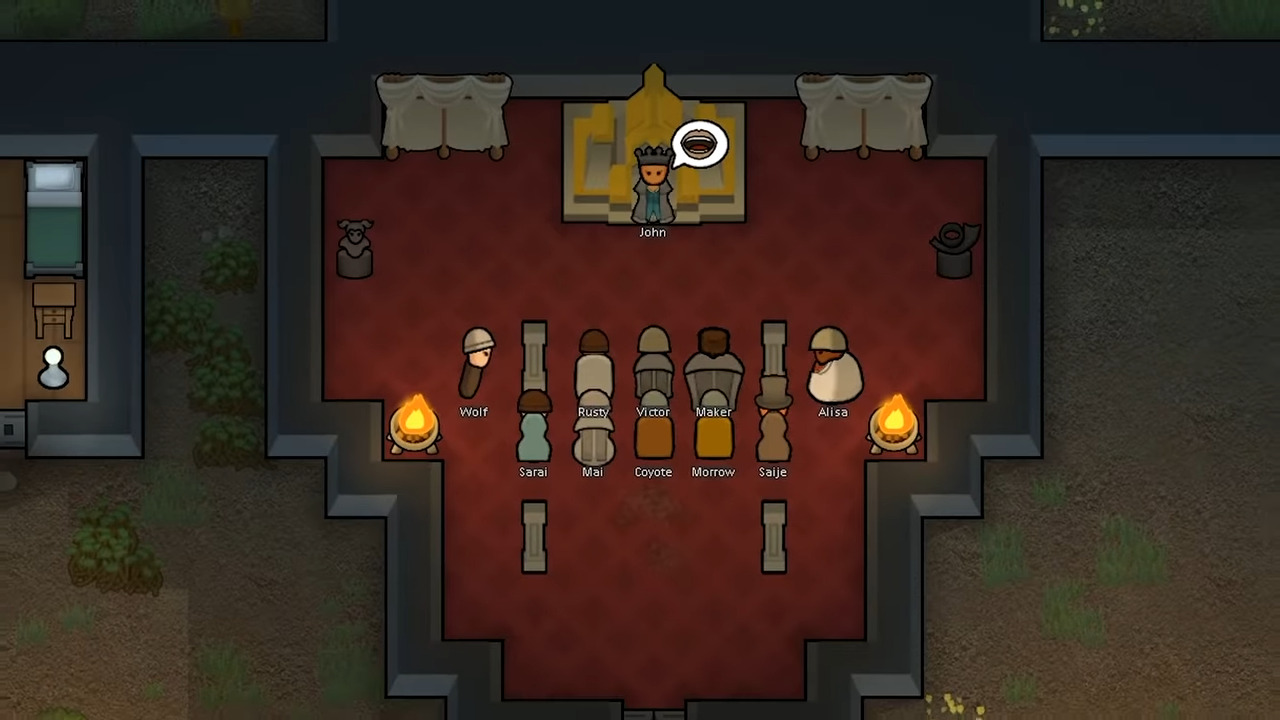 You could likely fill a book with truisms that gamers would prefer developers to adhere to; statements that ought to be obvious that somehow seem to consistently fall wayside when developers bring new fantastic works to light for players to explore.  They’re simple: don’t segment the player base across multiple DLCs that results in being unable to find a match.  Don’t introduce pay-to-win mechanics that leave your core fans as mere cannon fodder for your metaphorical whales.  Maintain consistent communication with your fans in regards to what’s upcoming, what you’re tracking, and what the development studio wants to do.

Ludeon Studios is killing it in all of these aspects with their title RimWorld, consistently hitting the marks in regards to everything they’re touching, and developing a rabid fan base that’s eager to eat everything that the studio offers.

Fans have been expecting the upcoming 1.1 patch for a couple of weeks since Ludeon announced its immanence, and with it was expected a large number of backend tweaks that make modding far easier, along with brand new mechanics that will bring even more depth to the colony simulator.  After a week in the unstable testing branch on Steam, update 1.1 is finally released today on Steam for everyone to play.

Oh, and a brand new expansion that was unannounced called RimWorld Royalty, which is priced at $20 on Steam as the first official DLC available for the colony simulator.  RimWorld Royalty is bringing a whole new slew of mechanics to the title, on top of the already bursting in size 1.1 update.  Some have already noticed that Tynan has claimed not to add DLC to the title in the future, but it’s an arduous task to claim that RimWorld is being thrown wayside for piecemeal content as it is releasing the same day as a massive update.  If RimWorld continues to add content for the base game, there’s little wrong with offering more content for money; it’s how a studio stays afloat well after release.

First, there’s a new title system, bringing about nobles from Dukes to Kings, allowing your pawns to cement their status as the veritable bread-winners of the colony.  These titles can be earned from the Empire, by completing quests that the Empire sets forth.  The quests are procedurally generated, and players will have to surmount a wild variety of obstacles in order to get those titles bestowed.  Once you successfully climb the ranks of titles, you’ll be asked to host the Imperial High Stellarch and protect them; success gives you a new victory condition to win, with your noble leaving the desolate RimWorld as an honored guest on their craft.

Completing quests and gaining titles will make your colonists a bit more demanding, as they’ll expect the privileges and luxuries afforded to someone of their stature; they’ll want gaudy and pristine bedrooms, decorated with gold and high-quality furniture.  They’ll demand throne rooms from where they’ll make bizarre speeches about the benefits of the peasant class being forced to eat insect meat, or inspiring confidence in the other pawns.  They’ll also issue outlandish decrees that must be carried out by the rest of the colony, while they practice the grand piano or harpsichord.

Titles act as more than a means of increasing the difficulty, though, as new titles will confer latent psychic abilities to royalty.  Nobles will receive the ability to force mass groups of enemies to begin vomiting on the spot, or blinding individuals.  Even mind-controlling enemies (and turning them against their friends and loved ones) is in the cards for those who show competence.  Nobles can also psychically buff friendly allies, from blocking their pain receptors to giving them a deadly focus on the task at hand, or even temporarily rendering an ally completely invisible to the enemy.

With all of this comes new technology from the Empire as well, juxtaposing the old and the new together into frightful new tools.  We’ll finally see melee users get a bit of love in the first DLC, with hammers and swords coming to the front.  Some weapons will have the ability to psychically communicate with the wielder, turning into ogrishly frightful tools of death.  A pawn bonding with one of these psychic weapons, however, is a life-long commitment from both.

Along with weapons come new state-of-the-art implants, giving your pawns that dream of cybernetic enhancements even more toys to play with.  Arms that act as drills make mining a breeze, while skin-hardening glands can be installed in your newly exalted melee users to increase their survivability in the fray.  Poison attacks can also be installed on pawns, along with weapon systems that are installed under the skin that will only come out when the user enters combat.

Finally, mechanoids are getting a bit of an overhaul in the DLC, allowing mechs to create buildings that will challenge players on their maps.  From factories that will continue to spit out new mechanoids to emitters that darken the sky (and render all of your solar power useless until dealt with), these new facilities will challenge players to plan out an offensive attack against the fortifications, ensconced by looming walls that the mechanoids have figured out how to build.  The fortifications can have shields that will block incoming mortars and projectiles, beacons and alarms that will call in reinforcements when threatened, and brand new mechanoid defenders ranging from spear users to snipers.  Expect casualties.

For the first foray into DLC, RimWorld Royalty is bringing about a brand new playstyle to the title that has taken thousands of hours from fans around the world.  It’s a solid offering, and seemingly one of many that users may be able to expect in the near future as Ludeon Studios have more than doubled the number of developers working on the title.  Take heart if reality begins to slip away as you sacrifice your time; you can always eat cake.

Aug 11, 2020 Chris Miller 15300
Here's an interesting thought: for a title that readily proposes cannibalism for self-preservation and organ harvesting from prisoners while you...

Apr 24, 2020 Chris Miller 42030
It's been far too long since I've made human leather cowboy hats well into the morning with my friends, as Rimworld's recent 1.1 update, along with...

Mar 31, 2020 Chris Miller 16480
There's a sneaking suspicion that Ludeon Studios is merely addicted to incremental development, after the years of development on the base game. ...