If You’re Waiting For State Of Decay 2: Juggernaut Edition, You May Want To Do This First 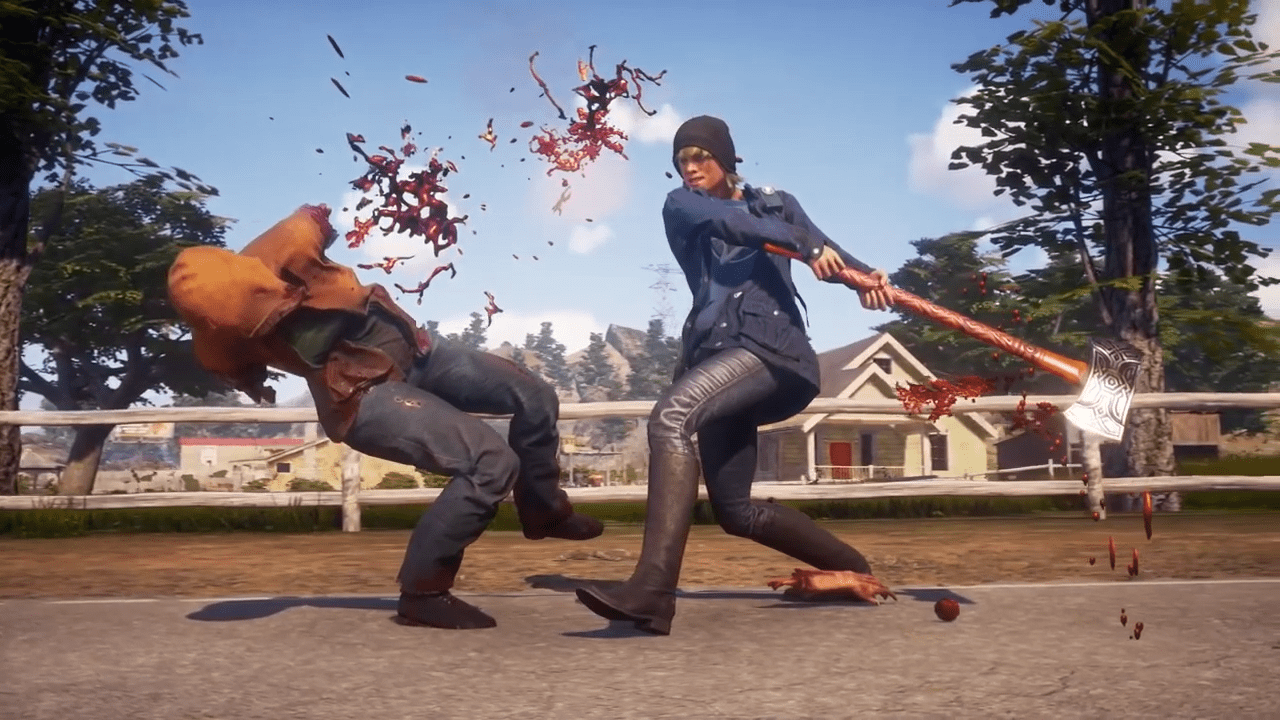 Note: State of Decay 2 Product Director reached out on Twitter to talk to me about the state of SoD2: Find more here.

At this point, everyone is well aware that Undead Labs State of Decay 2 is getting a bit of a rework as it arrives on Steam today, March 13th.  The rework is called State of Decay 2: Juggernaut Edition, and is bringing a couple of new features that may yet breathe life into the open-world survival experience that has a middling review with its initial appearance on the Microsoft Store on PC at the beginning of 2018.

Its release was admittedly rough, although fans of the series have started to almost expect the iffy experience that ensconces the relatively new franchise; players were unable to connect, saves were reportedly lost between updates by some users, and the entire experience had varying frame-rates on launch for many.  Include with this the new cooperative multiplayer experience (that many were anticipating as a primary difference between State of Decay and State of Decay 2) that has host tethering, and the inability to progress yourself, and only fans that were eager for the experience remained.

The upcoming State of Decay 2: Juggernaut Edition is a hopeful beacon for many, as it marks the arrival of the franchise back on Steam, in a move that is coordinated by Microsoft to bring titles such as Halo on the preferred platform for many. Speculation has run generally rampant over the past few months since the announcement of the Juggernaut Edition, as to what it may entail; while the studio Undead Labs have noted a few graphical improvements, along with two-handed weapons, there’s been no news on networking reworks or tethering in-game.  Which likely means that it’s still there, although speculation is all we have to go off of for the next twelve hours.

If you already own the title from the Microsoft Store, or the Xbox Game Pass for PC, you’re going to need to do something before you dive into the game, however, and it’s frankly not the most enjoyable process for some, although it’s rather bearable.  When launching State of Decay 2, you’ll be greeted by a screen that warns you that you’ll need to uninstall the game entirely, and then reinstall the title to play the new content. 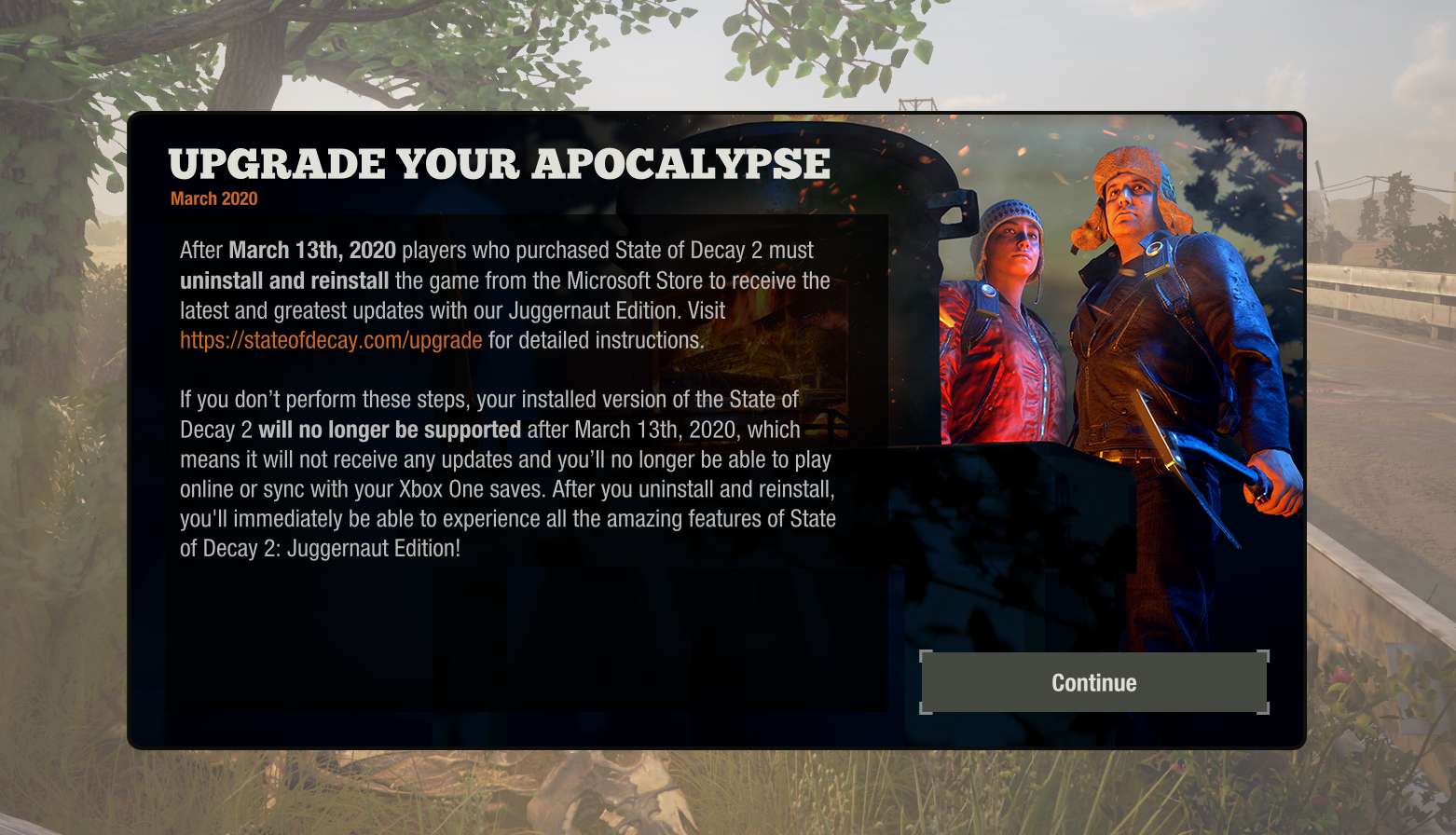 Undead Labs via State of Decay 2

It’s admittedly a bit odd that it doesn’t come as a patch, even more so when one considers the vast number of alterations that come through modding, operating primarily on overwriting files for textures and scripts, but it’s simply a hill that you’ll have to climb.  While many users that reside in densely populated areas will look at this as a minor inconvenience, rural users might be frustrated with metered connections or download limits; you’ll need to download roughly 17 GB after you uninstall the game.

Your survivors will survive the migration, as the reinstall won’t touch your save files; don’t lose sleep on it if your connection isn’t metered or regulated by external forces.  Rejoining the experience is quick and painless aside from resetting your various options for gamma and graphical fidelity (what is there in the game).

This also implies that prior mods for State of Decay 2 simply won’t work for State of Decay 2: Juggernaut Edition, so it would show meager wisdom to remove any mods until the various mod authors confirm compatibility with the new edition.  If you’re looking at picking up the title on the Steam platform, your download is only of the new version, so you won’t need to concern yourself with the various uninstall/reinstall process.  Although experience dictates that you may want to stay the hand, however temporarily, until some reviews come in.

Sep 26, 2022 Michael Gunn 130
There have been rumblings that Destiny 2 might be adapted for mobile devices at some point. Several patents held by Bungie provide hints to features...

Sep 25, 2022 Tom Lee 340
To address a common gripe from the Call of Duty: Modern Warfare 2 community, developer Infinity Ward has confirmed changes to how lobbies disperse...

Sep 25, 2022 Michael Gunn 200
Even though Gotham Knights will be available in less than a month, the general tone surrounding it continues to be one of bafflement. It's not that...