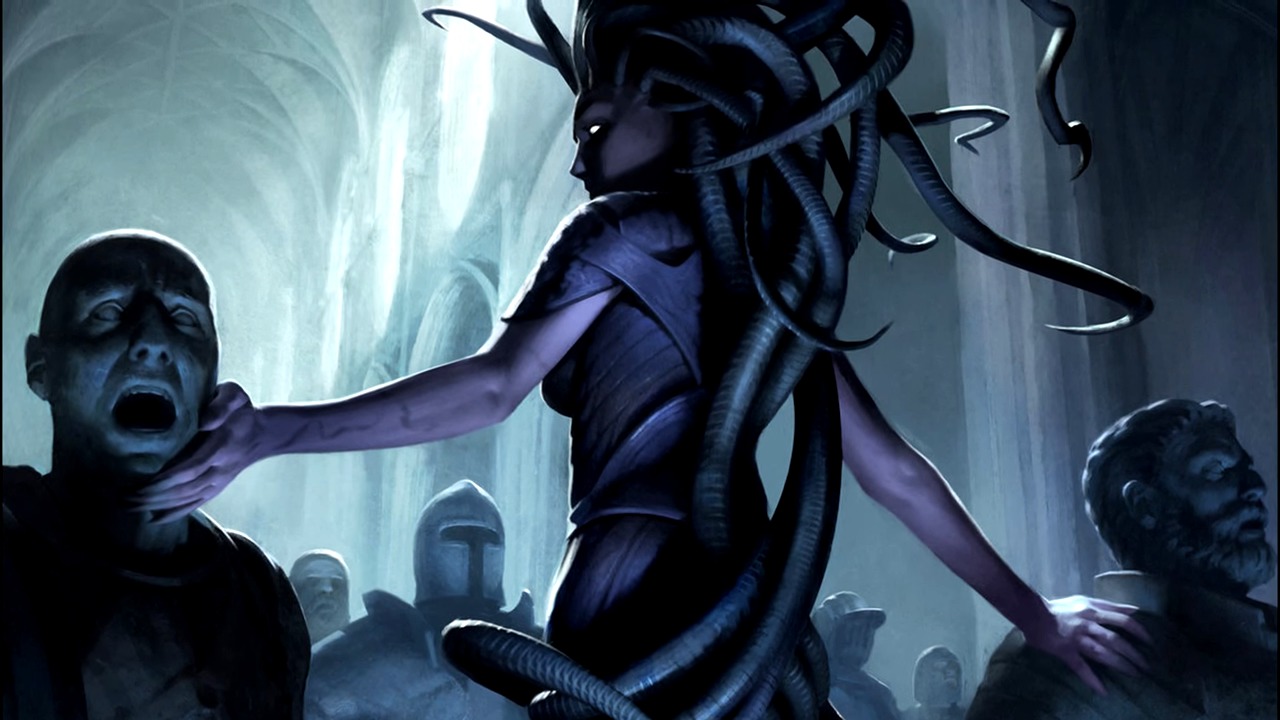 Gorgons got their start as part of Greek mythology, and have since made numerous appearances throughout D&D’s published history. However, in the D&D universe they’re known as Medusae.

Medusae are often depicted as humanoids with snakes for hair that can petrify someone just by looking at them. While the males were only capable of making people dizzy or confused, female medusae were known to fully turn people to stone.

When Hythonia first arrived at the island of Skathos, the inhabitants originally worshipped her as an aspect or avatar of Pharika, the God of Affliction. They offered themselves to her in hopes of gaining piety with Pharika, which Hythonia gladly manipulated.

Adventurers can hope to trade for the untold hoards of secrets and treasure within her lair, but it always comes with a price — a sacrifice of someone beautiful to add to her twisted throne of statues.

The island of Skathos, which Hythonia calls her lair, is home to an unusual amount of snakes. The trees are petrified wood and any plants that stay within 500 feet of the lair for 24 hours are turned to stone as well. The water within is poisonous, and any creature that drinks it must succeed against a DC 19 Constitution saving throw or become poisoned for 8 hours.

Hythonia also gains Lair Actions, which she can take on initiative count 20. She gains the ability to briefly animate stone objects she has petrified, as well as the ability to summon spectral snakes that have a chance to poison the player.

Hythonia herself has a fairly low AC at 17, as well as fairly low HP at just under 200. Her stats are fairly low as well, but she does have proficiency in Strength, Constitution and Charisma saving throws.

Her real strength lies in her Petrifying Gaze feature, which is a passive ability. A DC 18 Consitution saving throw is all that stands in the way of petrification if you find yourself looking at her, and if you fail the save by more than 5 you’re instantly petrified. Otherwise, a regular failure begins the petrification and you’re restrained.

However, her greatest strength is also her greatest weakness. If you’re able to force Hythonia to look at a reflection of herself, she can be affected by her own Petrifying Gaze.

Hythonia’s legendary actions include multiple attacks, the ability to move without triggering attacks of opportunity, and an AoE attack that makes the ground around her difficult terrain.

If your DM is feeling extra sadistic, they can add Hythonia’s mythic traits/actions into the combat. Hythonia’s mythic trait is called Shed Skin. Instead of dropping to 0 HP and dying, she gains 199 HP and can moves up to her speed without provoking opportunity attacks. This can be dangerous because if she gets away and is able to rest, it can mean an extra deadly encounter in the sessions following.

She also has a couple of mythic actions, which she can take after her mythic trait has been activated. Her mythic actions include an attack that has a chance to paralyze the target, and an ability that forces a creature that she has grappled to look at her and potentially be petrified by her Petrifying Gaze passive ability.

Despite all of this, Hythonia looks to be the easiest of the 3 new Mythic class monsters that were added by MOoT. If you’re interested in this material, it’s suggested to view the Mythic Odysseys of Theros campaign sourcebook for more information.

DUNGEONS AND DRAGONSTABLETOPMYTHIC ODYSSEYS OF THEROS

Dec 27, 2020 Seb Bates 16150
Tasha's Cauldron of Everything is well into its global release, and DnD adventures across the world have been dying to take a peek at the contents....