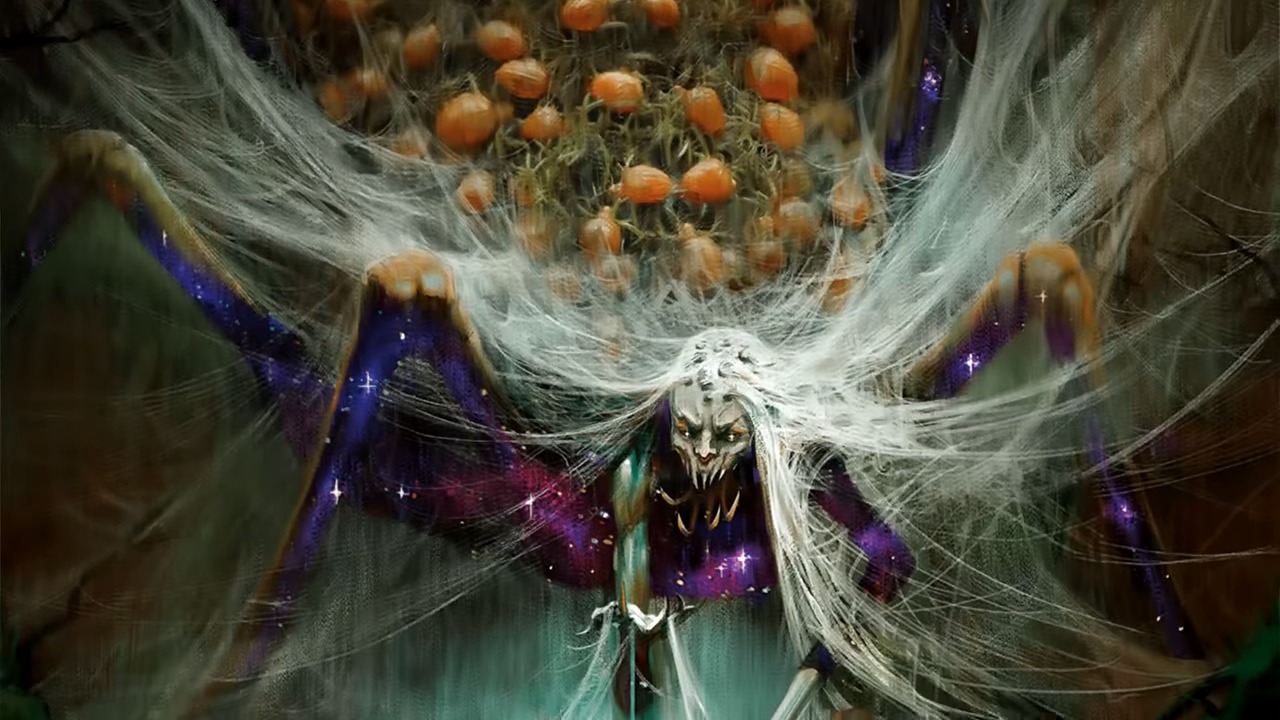 There’s a reason that so many people are afraid of spiders. They’re ruthless and calculating, representing everything hardcore about nature. Popular culture has had a good run with spiders, particularly giant ones, in films such as 8 Legged Freaks and Giant Spider Invasion.

And to segway from giant spiders in Pop Culture, Dungeons and Dragons has had its own share of these giant arachnids. They’re about as prevalent in D&D as you would think, in everything from, well, Giant Spiders, to the chief goddess of the drow and Spider Queen herself, Lolth.

Mythic Odysseys of Theros adds to the creepy collection with Arasta of the Endless Web. Arasta is a huge, monstrous spider-like creature with a few humanoid features which have been twisted by the cruel magic she was cursed with. Originally, Arasta was the most beloved of Nylea’s dryad companions but was transformed into her current state by Phenax, God of Deception.

Now, Arasta broods on her fate and the fickleness of the gods. She hates the gods and all that serve them. However, she’s not alone. Arachnids of all kinds live with her in the Enorasi, and act as her servants and spies.

Arasta makes her lair in the hollowed-out trunk of the Enorasi, though her webs span throughout the forest floor where this great tree makes its home. Within 1 mile of her lair, arachnids act as her spies, and webs cover every available space.

Since she makes her home here, Arasta gets the benefit of Lair Actions. On initiative count 20, Arasta can use a lair action to force creatures restrained by a web or in her Web of Hair to make an Intelligence saving throw against a 21. On a failed save, she gains knowledge of that creature’s name, race, where they call home and what brought them to her web. She can also cast Giant Insect (spiders only) with this lair action.

Now, onto Arasta herself. Arasta has a relatively low AC at 19, but a large health pool of 300 HP. Her stat array doesn’t go below 16, making her a formidable opponent. Her highest stats are Strength, Constitution, and Wisdom at a 24, 23, and 22 respectively.

Arasta’s main ability is her Web of Hair attack, which lightly obscures the area and creates a 30-foot cube of difficult terrain that can ensnare and restrain anyone who strays into it. What’s worse is that this webbing is immune to all damage except magical fire, so if you walk into this encounter unprepared it can cost you.

Arasta’s strengths aren’t necessarily in her physical attacks, (although these can be pretty dangerous if you’re not careful) but in her ability to restrain her foes, whether through her web or Web of Hair ability. Couple this with her ability to summon multiple swarms of spiders or giant spiders, and you’re essentially contending with an army.

If your DM is feeling particularly spiteful, they can add Arasta’s mythic traits/actions as well. Arasta’s mythic trait is called Army of Spiders and is a doozy. If she would fall to 0 HP, instead she gains 200 HP and spiders swarm all over her body, granting her 100 temporary HP as well.

Additionally, her mythic actions include multiple attacks and the ability to immediately recharge her Web of Hair ability. Furthermore, she gains the Nyx Weave action. Each creature restrained must make a DC 21 Constitution saving throw or take 4d12 force damage. Also, any spell effecting her of 6th level or lower is automatically dispelled.

If you like this material and would like to know more, it’s suggested to view the Mythic Odysseys of Theros campaign sourcebook for more information.