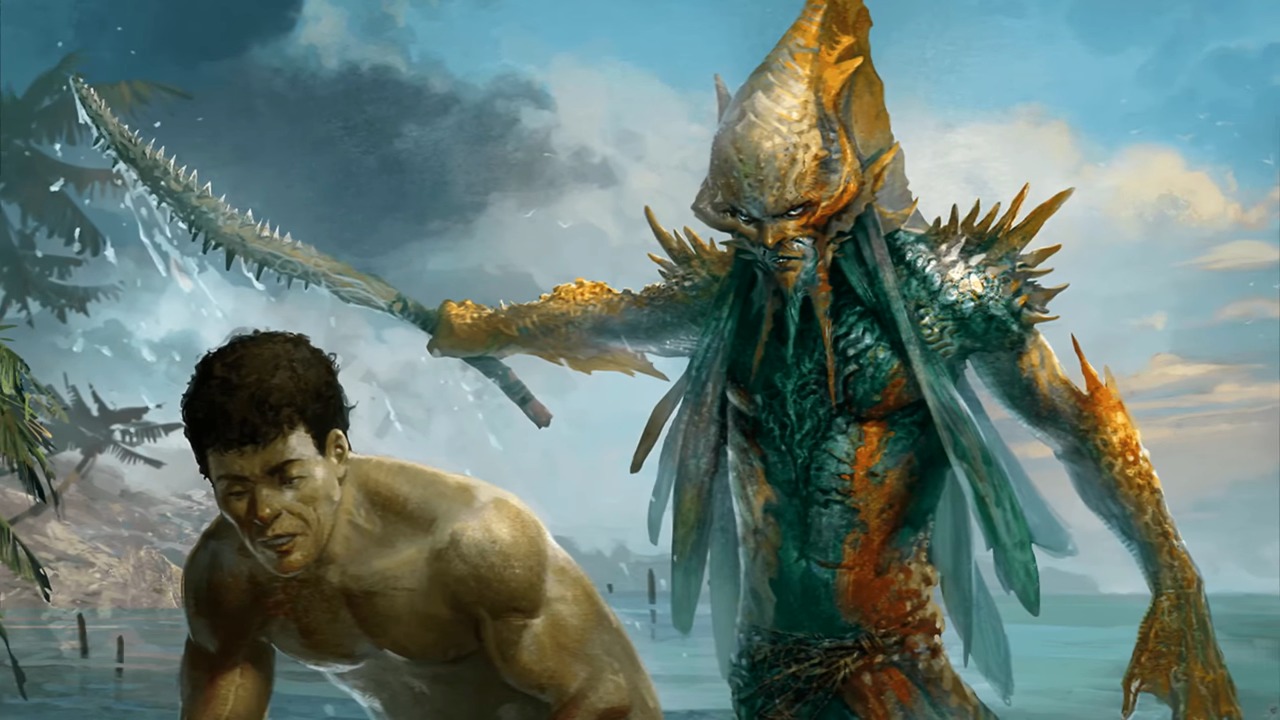 Dungeons and Dragons has been around for almost 50 years now and throughout that time has introduced scores of fun and memorable monsters and bosses to fight. Demogorgon is a popular monster that old-school players may have had to face at some point in their adventuring career, and of course, D&D brings to mind Ancient Dragons.

However, there are few monsters as dreaded to fight as a Kraken. Kraken have struck fear into the hearts of many heroes since the early days of Dungeons and Dragons, and Mythic Odysseys of Theros continues this terrifying tradition with their newest Mythic class monster, Tromokratis.

Tromokratis differs from traditional Krakens in that instead of attacking ships that sail across the seas, it is known for attacking coastal cities and settlements. It’s labeled as one of the most dangerous monsters in the sea because of its ferocity and lack of an established lair. This behemoth freely roams the sea, under no command but its own.

Tromokratis once toppled the Pyrgnos, (a great repository of knowledge), and ever since then the peoples of Theros keep a watchful eye for its return.

Tromokratis has a whopping 409 HP and a 22 AC, meaning that when you do get a hit off on this menace, it’s going to take you a while to wear it down. Its highest stats are Strength, Constitution, and Intelligence in that order, with a 30, 29, and 22 respectively. This is a very smart creature, so you can be sure it’s going to be fighting strategically.

Tromokratis’ wide array of damage resistances and immunities make it a pain to try and wear down, and proficiency in Intelligence and Wisdom saving throws mean this creature’s only real stat weaknesses are Dexterity and Charisma. However, Tromokratis also has Spell-Resistant Carapace, meaning it has advantage on saving throws against spells, and any creature that makes a spell attack against it has disadvantage on the attack roll.

All of these things combined means that spellcasters are going to have an especially difficult time with this behemoth, as many of their spells are going to have little effect. This isn’t the whole of it, however. Tromokratis gets Multiattack for 3 attacks a turn, with most of its attacks also grappling or restraining the target.

The monster gets its normal array of legendary actions and resistances, but if the DM is feeling especially cruel, they can choose to add the optional Mythic Traits to the Kraken. Tromokratis’ Mythic Trait is called Hearts of the Kraken.

When Hearts of the Kraken is activated, instead of dying when it reaches 0 HP, Tromokratis’ carapace instead splits open, revealing 4 hearts. These hearts each have an AC of 22 and has 100 HP, giving the nightmare an extra 400 HP total.

With the extra mythic traits also comes additional mythic actions, which function as extra legendary actions. Rampage gives the creature an extra couple of attacks, while Coral Growth is an AoE attack that also increases the AC of its hearts until the start of its next turn.

If this creature is defeated, it grants a staggering 180,000 XP to the players, along with any potential reward the DM has sought fit to bestow.

If you like this material and would like to know more, it’s recommended to view the Mythic Odysseys of Theros campaign sourcebook for more information.