The Rivet Networks introduced the new Killer AX1650 wireless adapter, which is especially geared for gaming.

According to PCGamer, the Killer AX1650 is built on the Intel hardware, specifically the AX200 module. This new adapter makes use of 802.11ax technology or Wi-Fi 6. A better and more efficient technology compared to the 802.11ac or the Wi-Fi 5.

The AX1650 reportedly helps ensure lower latency, which would be a godsend for online gamers everywhere. If you are ever playing online games, then you would be very familiar with latency.

Latency basically measures that time needed for your computer to deploy data to the server or the game server. The game server then sends back data to your computer. The higher the latency, the more it takes for the data exchange to be completed.

Low latency means that you can enjoy the online game will fewer hitches.

Despite the misconception, Wi-Fi 6 is not really about speed, although it’s faster than your average network connection. For instance, the Wi-Fi 6 ups the max speed to 9.6 Gbps from the 3.5 Gbps from its predecessor.

Of course, you are not going to reach these kinds of speed when you connect on Wi-Fi. Besides, you don’t need that type of speed anyway. For instance, you can download a 1 GB movie in under 2 minutes on 72 Mbps download speed.

Why 72 Mbps? That’s the average download speed in the United States.

How Wi-Fi 6 can help you is that it improves the network when there are several devices connecting to it.

According to Rivet Networks, the AX1650 is a major upgrade over the AX200. The new device features higher battery life and even lower latency even with several connected devices. It also guarantees an improved throughput.

In fact, the new adapter performs 40% better compared to the AX200 because of the 2.4 Gbps throughput.

Another feature that would be welcomed by online gamers is the optimization feature of the AX1650. In a dense environment, the adapter will automatically optimize the connection for lower latency.

Say, four of you are connected to the same Wi-Fi network. You will have a clear advantage of your friends if you are using the AX1650. The adapter will always try to find the better bandwidth and latency amid the gridlock.

Watch out for the AX1650 when it comes out later this month. For now, the wireless adapter will be deployed in Alienware devices. 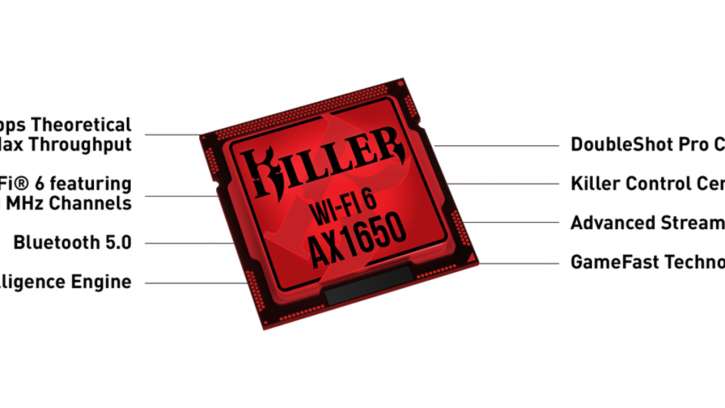 Apr 18, 2019 Kristel Goldwin 4780
The Rivet Networks introduced the new Killer AX1650 wireless adapter, which is especially geared for gaming. According to PCGamer, the Killer...