Players will now have another opportunity to become a dinosaur and fight against other creatures in the new mobile title Path of Titans. Not only will players have to search for food to survive, but predators are also lurking everywhere.

Alderon Games has announced the launch of its dinosaur-themed survival video game Path of Titans is now available on the Apple App Store. Path of Titans allows players to choose from various dinosaurs and fight to decide who is the strongest. The game not only has PvP combat, but players have to survive within a dangerous environment.

The game is a large arena where up to 200 players can join a server. Tasks can be completed either alone or with a pack of friends. Completing tasks will unlock rewards and new customization options.

As the game progresses, players can unlock skins and “alternate species of each dinosaur genus.” That includes changing colors and markings on each creature to make them unique. The colors are all realistic since players won’t want to stand out too much in a game where survival is key.

Besides from real-world players, intelligent AI also roams about, so players will have to stay cautious at all times.

Path of Titans is an MMO dinosaur video game being developed for home computers and mobile devices. Play as one of 10 core dinosaurs in a rich ecosystem filled with complex AI creatures and up to 200 other human players. Explore an environment filled with natural events, all while avoiding death and augmenting your dinosaur to suit your play style.

While the game is out on the App store now, there are plans for launch on Android and PC, Mac, and Linux in the future. When the game has been released on other platforms, players will be able to cross-play with others. Everyone can connect and play on the same server, no matter how they’re playing the game.

Path of Titans is free to play and is a digital download of 2.8 GB. There are some -in-app purchases for content that were only available for crowdfunding backers, such as immediate access to all 18 skins and dinosaurs such as the Stegosaurus and Camptosaurus.

Path of Titans began as an Indiegogo crowdfunding campaign in 2019. The title reached over 260% of its flexible goal and was quickly brought to life by gamers who want to play as a dinosaur.

Path of Titans is available now for free on the App Store. 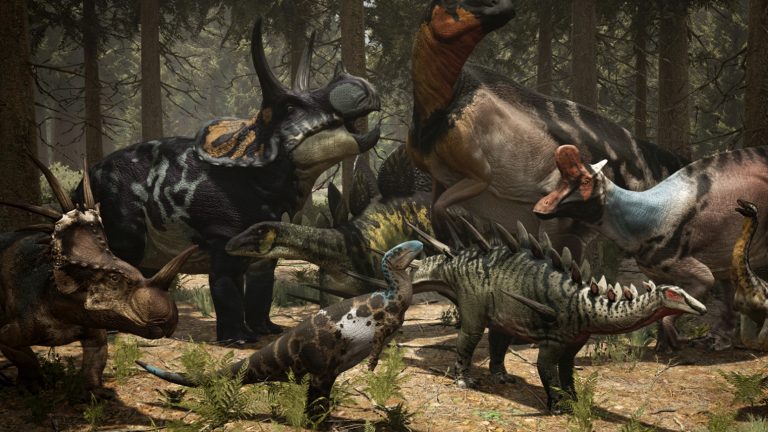 May 8, 2020 Lisa Nguyen 21830
Players will now have another opportunity to become a dinosaur and fight against other creatures in the new mobile title Path of Titans. Not only...