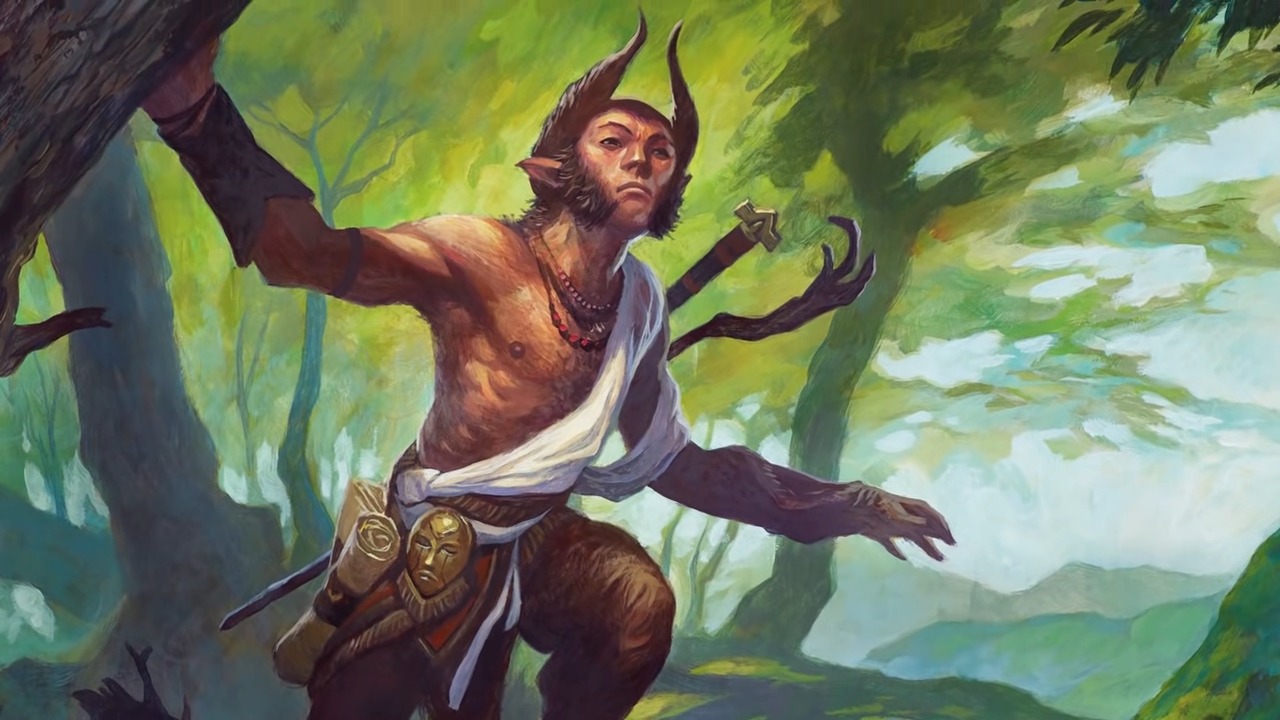 Mythic Odysseys of Theros is a new campaign sourcebook set in the Greek-inspired land of Theros. MOoT is a collaboration of material found in the D&D and Magic: The Gathering universes. Other such crossovers exist, such as the Guildmaster’s Guide to Ravnica, which came out in 2018.

With MOoT came a couple of new subclasses and races, one of which is the Satyr. In classical Greek mythology, Satyrs were nature spirits with the legs and ears of a horse that loved dancing, wine, and all sorts of carnal pleasures. Today, they’re pretty much the same but they look more like goats.

Satyrs live in the Skola Vale, a lush land in Theros blessed by Nylea. These fey are known for enjoying life to its fullest. They follow unpredictable paths and tend to go with the flow more often than not.

They engage in revels that, while seemingly only about debauchery and hedonism, are actually more complicated. Satyrs celebrate the good and small things in a world that is often plagued with strife.

NAMES:
Satyrs are given a name when their personality begins to shine through. This name is meant to match the energy of the Satyr. Many Satyrs also give each other nicknames, most often designated by physical or mental aspects.

SUGGESTED CLASSES:
This race’s ASIs are best suited for any Charisma-based class, but the Magic Resistance feature makes this race a viable option for any class, not just the most optimal ones.

Bard: This was a given, and arguably the class that benefits the most from the Satyr’s combination of racial abilities, beyond the bonuses to Charisma and Dexterity. Magic Resistance suddenly increases the survivability of a bard ten-fold, and the Fey racial typing means the Satyr is given straight immunity to many magical effects and spells. Reveler also gives you three proficiencies that are staples for bards, allowing you more creative control over skill choices, making the bard even more of a jack-of-all-trades. The addition of the College of Eloquence would be mechanically and thematically appropriate.

Sorcerer: The Sorcerer benefits from the Satyr in much the same way as Bard does. ASI’s contribute to the Sorcerer’s casting stat and AC, but the big bonus for this class is still definitely Magic Resistance.

Warlock: Warlocks are right up there with bards as the classes that get the
most out of the Satyr. A bonus to Charisma boosts the warlock’s casting stat and Magic Resistance is what it is. The Fey typing helps the Warlock to avoid an array of spells, while Warlock Invocations can also help to shore up the Satyr’s main weakness, (if this really matters) which is a lack of darkvision. Hexblades probably benefit the most out of the warlock subclasses, with the increased survivability and walking speed making them less glass-cannony.