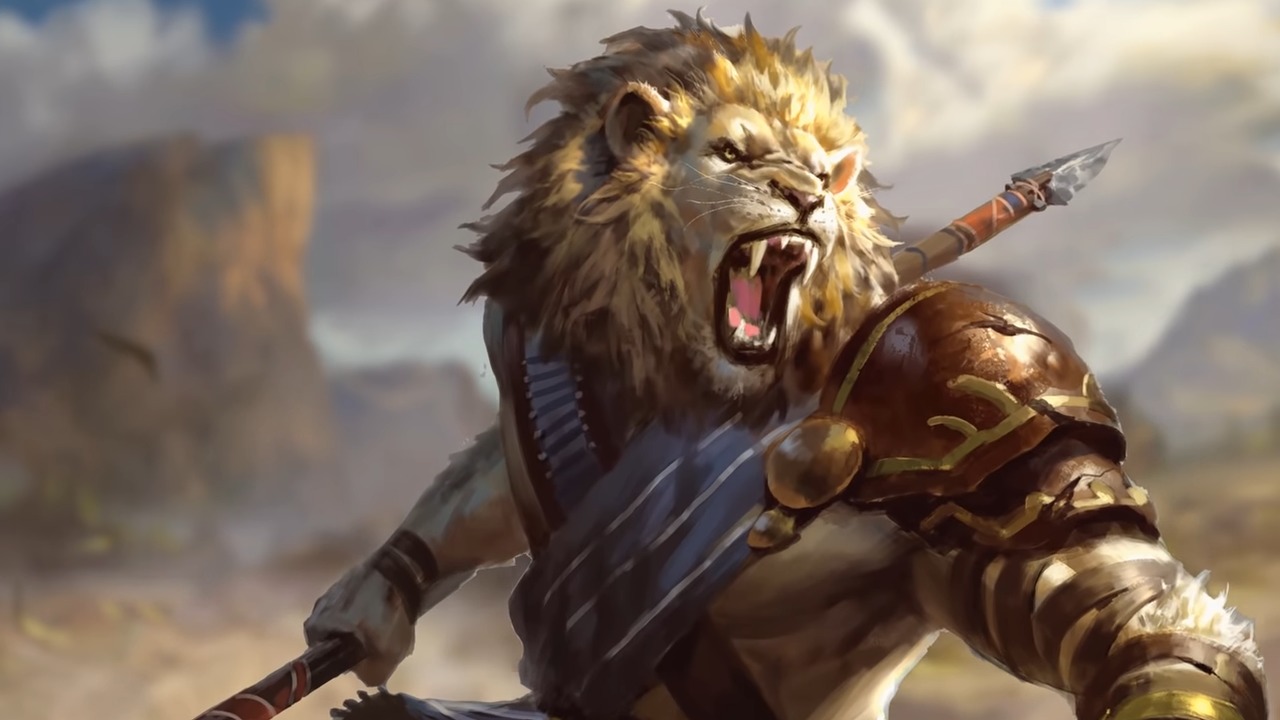 Mythic Odysseys of Theros is a new campaign sourcebook that focuses on Theros, an Ancient Greek-inspired land that was originally part of the Magic: The Gathering universe and is now available for exploration in Dungeons and Dragons Fifth Edition.

Along with a couple of new subclasses, MOoT also added in two new playable races: the Leonin and the Satyr, the former of which we will cover below, with the latter being covered in a future article.

Leonin are a proud race of cat-folk in Theros that live in the golden plains of Oreskos, a land bordered by mountains that even the gods themselves rarely stray into. They’re extremely territorial, rarely interacting with strangers or even allowing them into their lands to begin with. Leonin are very self-reliant, incredibly athletic, and quick to anger.

They identify themselves with a first name and a pride name. First names don’t seem to have much of a naming convention, but pride names tend to be a combination of two words, usually notating a perceived physical or mental aspect of the pride.

TRAITS:
Ability Score Increase: +2 Constitution, +1 Strength
Age: Same as Humans
Alignment: Trend towards good alignments, with pride-focused Leonin trending towards Lawful Good
Size: 6-7 feet tall, typically stockier builds, size is Medium
Speed: Your walking speed is 35 feet.
Darkvision: Greyscale, up to 60 feet
Claws: Natural weapon unarmed strikes, 1d4 + Strength slashing damage
Hunter’s Instincts: Proficiency in one of the following skills: Athletics, Intimidation, Perception, or Survival.
Daunting Roar: As a bonus action, creatures within 10 feet of you (of your choice) that can hear you must make a Wisdom saving throw or be frightened of you until the end of your next turn. The DC for this feature is 8 + your proficiency bonus + your Constitution modifier. This can be used once per short or long rest.
Languages: Common and Leonin

SUGGESTED CLASSES:
This race’s ASIs are best suited for Strength-based melee classes, as the bonuses to Constitution and Strength allow the character to act on the frontline.

Barbarian: A no-brainer. Barbarians need to be strong and beefy so that they can act as the tank of the group. A bonus to Constitution is a bonus to an already large health pool, and also increases the effectiveness of Unarmored Defense. A bonus to Strength is a bonus to damage for a barbarian, with the Rage feature only working with Strength-based attacks anyways. Daunting Roar shores up this choice with a way to frighten enemies, as well as being thematic.

Fighter: Another no-brainer, Strength-based fighters will definitely appreciate the bonuses added by Leonin for many of the same reasons as barbarians: more health and damage. If you’re going to be focusing more on being a tank for your party, this class is great. Otherwise, there are other races than offer better bonuses to Strength, although this is by no means a bad choice.

Paladin: Given that MOoT also added a new paladin oath, the Oath of Glory, Leonin could be very thematic. Beyond that, paladins also benefit from bonuses to Strength and Constitution as frontline tanks/DPS. Oath of Conquest also synergizes well with Daunting Roar.

Dec 27, 2020 Seb Bates 16150
Tasha's Cauldron of Everything is well into its global release, and DnD adventures across the world have been dying to take a peek at the contents....