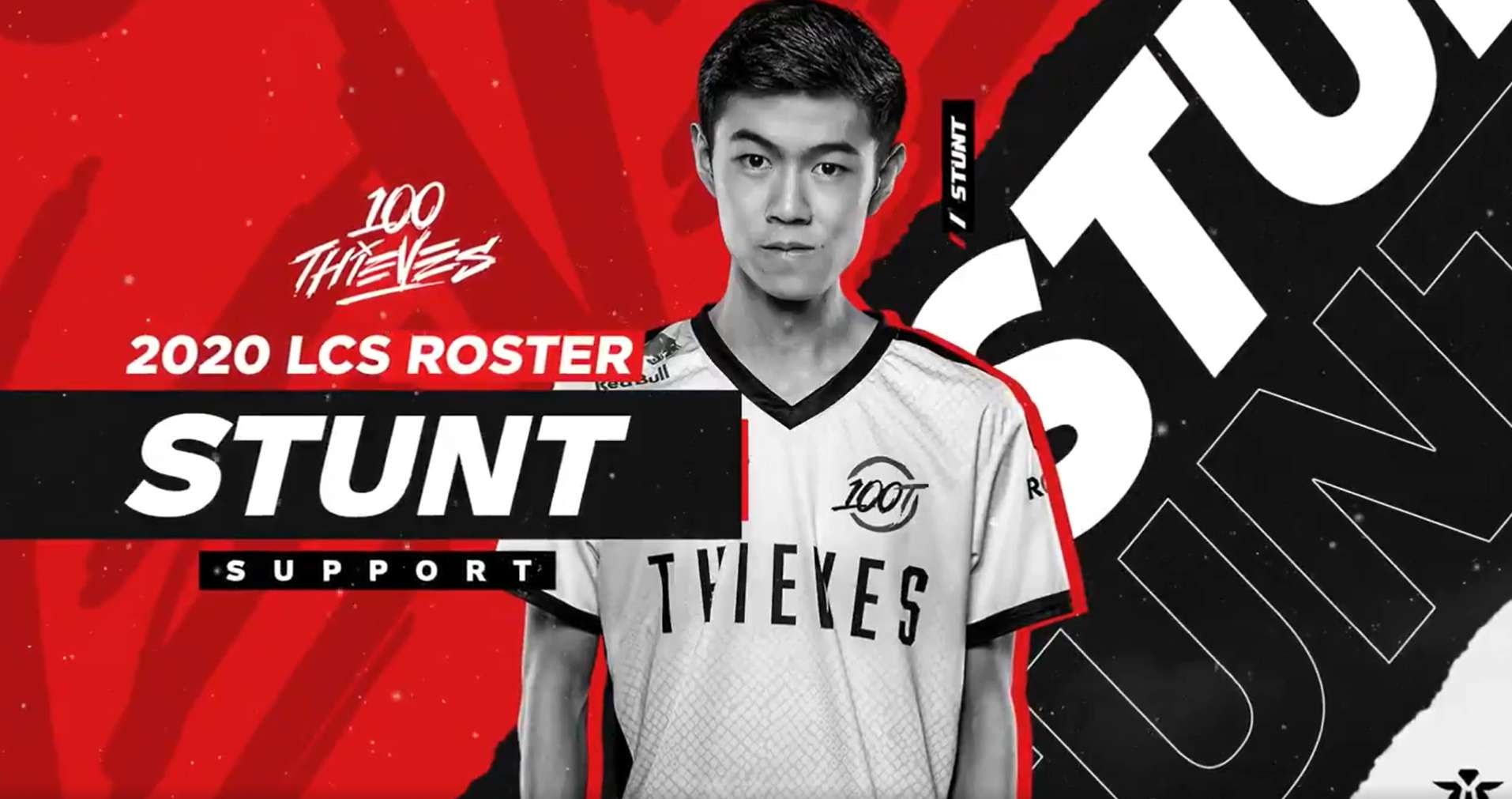 With the recent departure of Aphromoo (For more information, click here) from 100 Thieves, it was unclear who might be the starter support.

A couple of hours ago, 100 Thieves released an announcement promoting Stunt from the academy to the main roster for the upcoming LCS season.

Welcome @Stuntopolis as the support for our LCS starting roster in 2020! We're excited to have you back and can't wait to see what you can show on the big stage next year. #100T pic.twitter.com/g7xFZoKjyf

William ‘Stunt’ Chen began his esports career in 2013 playing the Collegiate Organization UCLA. He played for the organization up until Jan 2015. From Jan 2015 onwards, he played on multiple teams for short periods up until March 2017. In March 2017, Stunt joined Phoenix1; the team alternated between him and Shady as the primary support.

Phoenix 1 finished 3rd in the regular season of Spring with an 11-7 record. In the playoffs, they were knocked out in the semifinals but managed to reach the 3rd place by beating Flyquest. Stunt left the team and went to join Immortals as a substitute for the remainder of the season.

In November, when franchising was announced for the LCS, Immortals were denied the application, and Stunt left the team and went to join Flyquest as their new support.

The team alternated between Stunt and JayJ for the support role during the 2018 Spring Season, but they were still quite unsuccessful, finishing eighth in the Spring Split. After a disappointing Spring Split, he was approached by the 100 Thieves organization. He has accepted a support role in the Academy League since the main League already has Aphromoo as the primary support.

Stunt played in the North American Academy League from May 2018 up until March 2019, where he was given time on the main LCS stage as well. While playing in the Academy, Stunt was performing well alongside his team, managing to finish 3rd in Spring, 3rd in Summer, and winning the Summer playoffs aswell.

When playing on the LCS stage, Stunt played quite well, but there was no coordination from the main squad; they finished tenth in the Spring Split due to multiple substitutes across the season and not allowing coordination to be built between the same team members. While Stunt cannot be considered top tier support, he is reliable resident support, who does not take up an import slot, allowing the team to explore for imports for other roles.

The 100 Thieves organization is looking to upgrade their roster to improve the performance after the disastrous Spring and Summer Split. While the entire roster remains unknown, the currently known list of Ssumday/Meteos/Stunt looks to be an excellent foundation for the team.

Stay tuned for more roster changes in the offseason in the next couple of days.