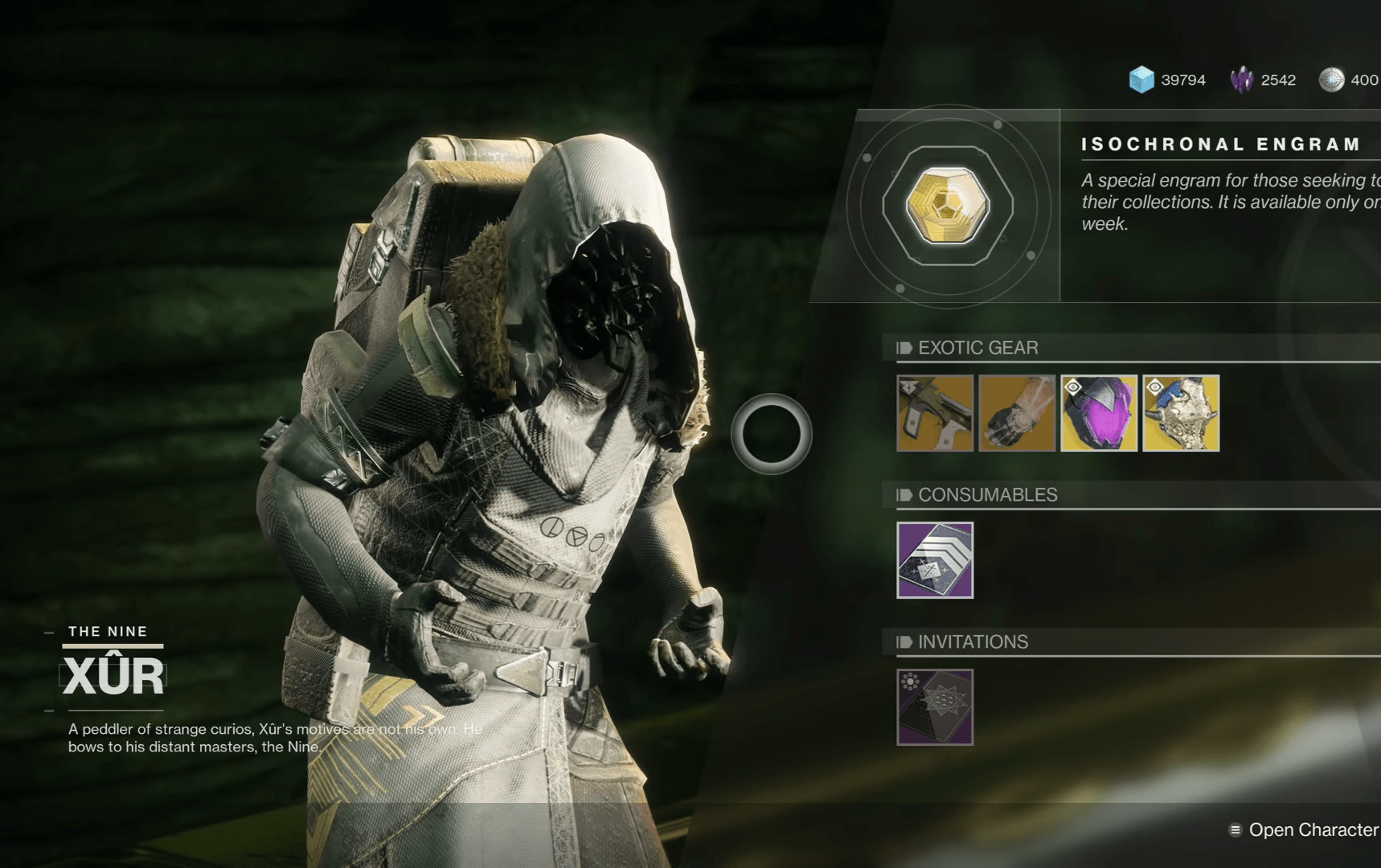 The Agent of the Nine has returned yet again in Destiny 2, bringing with him yet another haul of exotic items. Xur is the only vendor in the game that sells exotic weapons or armor, and as such is beloved by guardians all throughout the solar system. He also gives players the opportunity to receive one piece of guaranteed exotic level equipment you have yet to unlock.

This week, Xur is holed up on Nessus. He is active from today until the weekly reset on Tuesday, so make sure to drop by and see him before then. Guardians should drop in at the Watcher’s Grave spawn point, and make their way to the barge that belongs to Calus. He is on the top of the barge, past Werner 99-40, and near the golden chests, you can pay to open as part of the Menagerie.

So what does the tentacled agent have in stock this week? Well, all of the gear is year 1 DLC or base game exotics, so most seasoned players will have them already. However, now is a great time to pick up these armor pieces for those just jumping into the game.

Each exotic armor piece is priced at 23 legendary shards, with the exotic weapon of the week running at 29. The first on the list is for Hunter players and is a helmet called Graviton’s Forfeit. This exotic helmet is actually very good in PvP, especially coupled with the new Nightstalker tree. It increases the time you can remain invisible and speeds melee recharge while invisible.

The next exotic you can find is Khepri’s Horn and is for those Titan players out there. The perk makes a burst of fire shoot out when you place down a barrier, and upon a solar kill, you get a barricade charge back. It sounds very powerful, but especially in the current meta, there are much better options for both PvP and PvE. Either way, this helmet is needed to complete your collection, so it is still recommended to pick it up.

Finally, Warlocks have access to the Sunbracers. These gauntlets are fairly powerful in PvE, and grant increased time for Solar grenades. They also have a fun additional ability, allowing users to chunk out infinite grenades shortly following a melee kill. It could be argued that there are better options for Warlock exotics, but these gauntlets become much more powerful during any activities featuring a Solar singe.

That’s it for unique exotic armor, but Xur has even more to offer players. This week you can pick up the Huckleberry, a decent exotic submachine gun that can fire for extended amounts of time as kills partially reload the magazine, at the cost of increased recoil the longer you fire. Also, don’t forget to grab the Fated engram as it guarantees an exotic you haven’t yet obtained before.