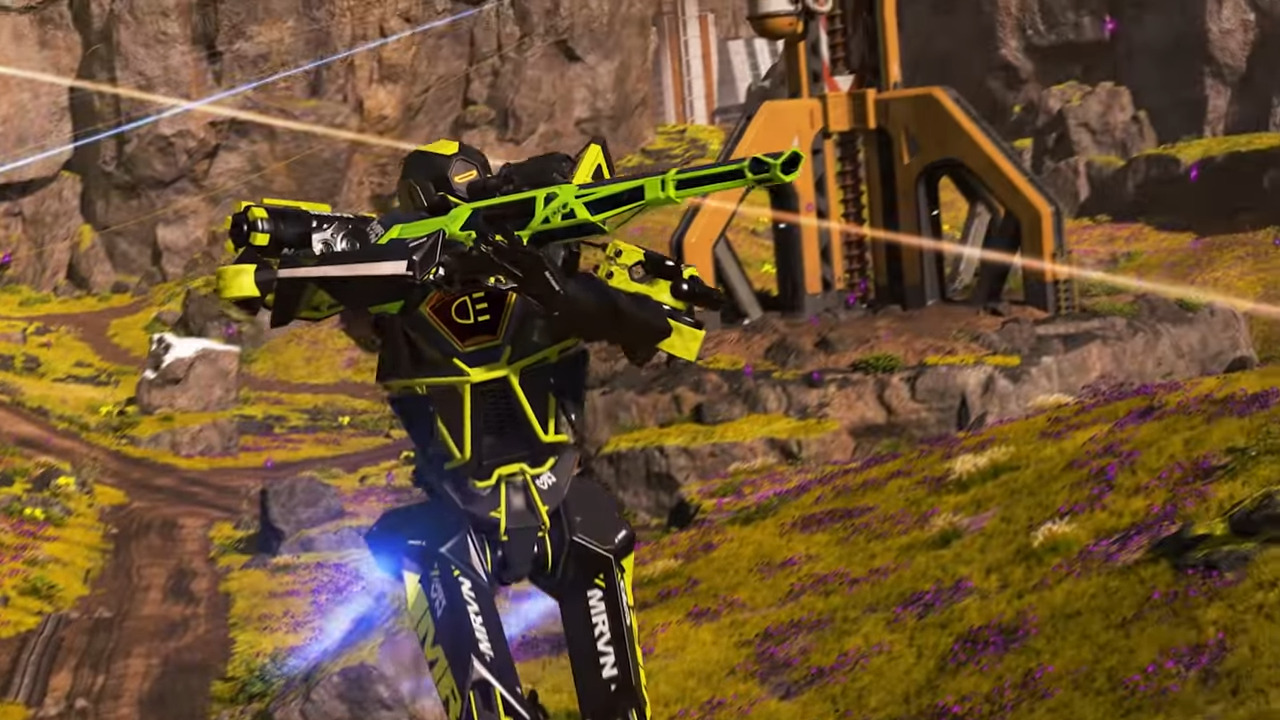 Dataminers and leakers are already pretty sure that it’s going to be Caustic. Poses have been leaked, alongside item names and other hints towards what the big stinky boy is going to get for his ultra-rare melee weapon.

So what is the Heirloom called? Fittingly, @shrugtal on Twitter claims the upcoming rare item set for Caustic features the “Death Hammer” melee weapon.

Check out the tweet with the heirloom animation below:

Yes. They are some destroyed MRVNs in the background. That’s the same make of robot as Pathfinder. Seems like Caustic really hates those friendly robots. Maybe the developers do too, considering his recent nerfs…

Although you can’t see the hammer in that animation – these are kept under tight control until the actual Collection Event goes live – it’s pretty clear that it’s a single-handed hammer that Caustic is going to be wielding.

The upcoming Collection Event where Caustic’s heirloom features is likely called “Aftermarket”. This arrives soon, in around 3 weeks. Just the start of September.

Alongside the Caustic Heirloom, there are bound to be a bunch of different skins, poses, and other cosmetics for various other legends. To earn Caustic’s Heirloom you’ll have to buy all the different skins.

Dataminers have leaked various skins from the upcoming event. They all follow a certain theme – it’s all about tech, mechanics, and power-ups. This fits Rampart (the new legend’s) mechanic and car themes.

The event will also feature a new LTM called Flashpoint. This is a sort of updated “Campfire” mode where healing is only available at certain points dotted around the map.

Respawn sure does like to come up with modes where healing is made even more difficult than it is in the current meta. The ring is always closing, so the fights around these so-called Flashpoints is probably going to be intense.

Lastly, there will also be a number of free prizes available in the event prize track. These will involve challenges that must be completed in the Flashpoint mode and be based on a point system like previous LTMs.

Apex Legends Season 6 is well underway, and although the new meta changes have been tricky for many to get used to, the game is still going through another of its successful season launches.

Aug 10, 2022 Robert James 340
Even though Apex Legends has received high praise from the gaming press since its release, the game has been home to a wide variety of unusual and...

Jul 27, 2022 Tom Lee 710
The creator earlier today unveiled the newcomers to the Apex Games in New Stories from the Outlands cinematic. This is Mara's debut in Respawn's...