Please look forward to the full interview from Cuzz of @T1LoL ! pic.twitter.com/5i3xU7BAnv 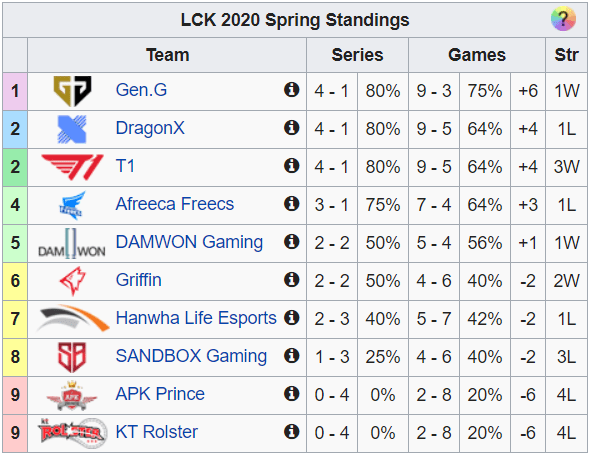 1st place –  Gen.G – they looked unbeatable in most of their games, their only loss was against T1, who have started improving quite a lot with the new roster. The duo of Bdd/Clid is very strong and is a good addition to the stable bottom lane of Ruler/Life.

2nd place – DragonX & T1 – DragonX have looked quite good, the power of cvMax (ex-Griffin head-coach) lies within the roster within Doran and Chovy, both ex-Griffin players. While Deft had some ups and downs in some games, he has remained a stable ADC, who overpowers his enemy laners, alongside his support Keria.

T1 has looked better week 2 compared to week 1. Their synergy is insane, and while the loss of Clid hurt the team a bit, they are looking to remain a top contender in the LCK.

4th place – Afreeca Freecs – a lot of people doubted them, but they prove to be a reliable contender for the top 4. The biggest question mark is probably their mid-jungle, and while they’re doing much better than expected right now, the recent game against DRX did call the laning capabilities of their mid, whether it be All In or Fly, into question.

6th place –  Griffin – they are doing better than many people expected them after losing the solo laners and support to other teams. Obviously, this is a hard season for them, with the laning prowess of the laners having decreased, and the meta not being too suitable for Tarzan, but bringing in Ucal was very important for them.

7th place – Hanwa Life Esports – no matter what happens to this team in the future, it’s for the benefit of LCK that teams like HLE exist: teams that are willing to try out crazy strategies, including those used in other leagues, even if they show the weaknesses of those strategies. They are consistently mediocre.

8th place – Sandbox Gaming – They showed a bit more flair and color in Kespa cup and in their match against APK, but they then had three losses in a row which deleted all hope for this team. They fell off a cliff and are unable to recover.

9th place – APK Prince / KT Rolster –  both these teams are obviously really struggling, but while KT has better players, APK is playing better and show more signs of life in their games. KT has been playing worse and worse as the games have gone on, while APK is getting ever so slightly better and better.

This is the end of the LCK standings review after 2 weeks of play, stay tuned next week for another one.