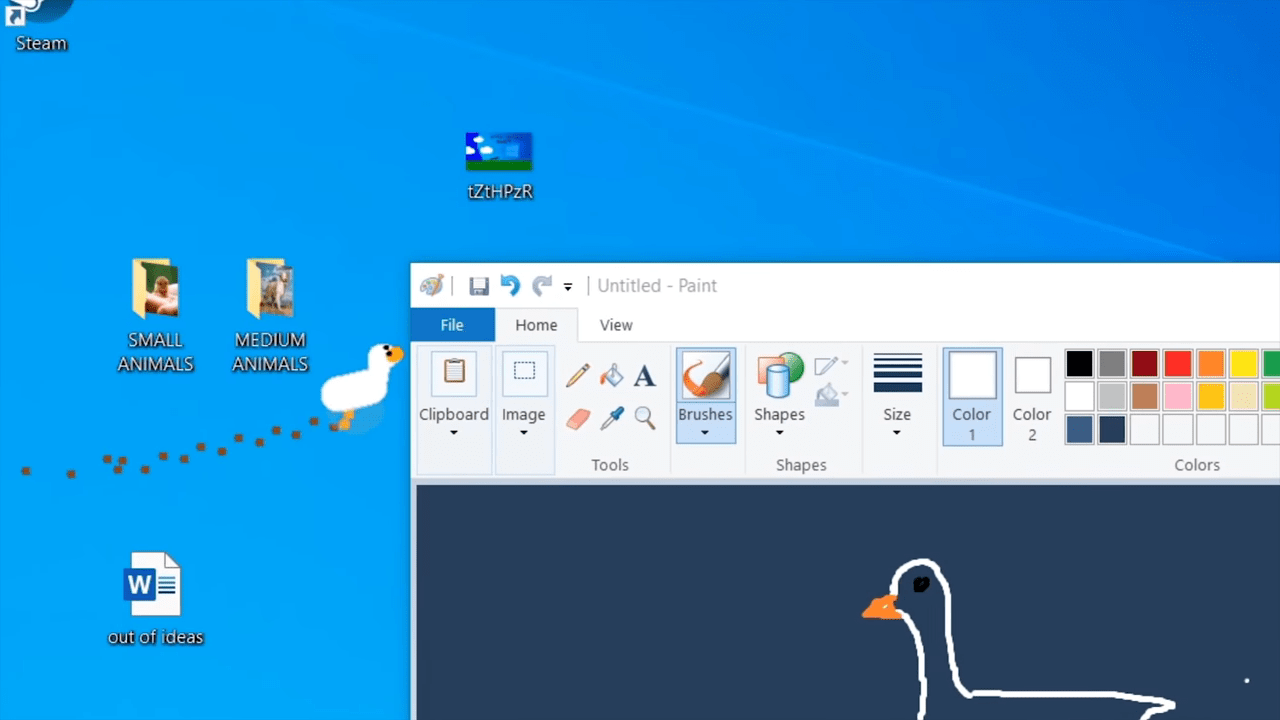 Geese are not friendly creatures. Anybody who has visited a zoo as a kid, or managed to accidentally cross one in the wild, is no doubt aware of this.

Luckily, their mischievous natures made one heck of a great video game this past year. Developer House House released Untitled Goose Game in September 2019, and the game has been a massive hit for the company. It’s won a bunch of awards and been the source of many great memes in the few months that the game has been available.

The now-famous Goose’s antics inspired an 18-year-old coder by the name of Sam Chiet to pose the question, “what if this Goose ran amok on people’s computers?” Literally nobody wanted it, but it looks like we got in anyway.

Chiet’s new Windows 10 app brings the Goose and all of its mayhem to your desktop. It’s kind of like one of those virus-ridden desktop pals from back in the day. You know, the weird purple ape guy BonziBuddy, or the definitely-NSFW desktop “models” that seemed to be in every ad on the internet. The app is simply called Desktop Goose, and can be downloaded from Chiet’s page on itch.io.

While those things were tremendously dangerous to install, filled with all kinds of malware, the Goose just wants to ruin your day and disrupt any plans you may for being productive. The Goose wanders your desktop screen, wreaking havoc. It will spread mud across screen as it pitter-patters around, honking incessantly. The virtual nuisance will also grab objects and move them around the screen, most of which are goose-related memes.

Desktop Goose is a customizable experience, as well, allowing you to have control over what the Goose trashes your desktop with. You can put in whatever content you like, such as GIFs, images, memes, and so on, creating your own personalize chaos that you might like to send to a friend. Be careful with your mouse cursor, too, as the goose has a tendency to yank it away from you.

It’s definitely a fun little experiment, and one that has quickly garnered a lot of attention from fans. There is already a modding community for the project, so you can expect the app to become much crazier as time goes on.

If you’re interested in checking it out, head on over to samperson.itch.io in order to download a copy. In the meantime, you can play the original Untitled Goose Game on basically every platform, including Nintendo Switch, Xbox One, PC, and PlayStation 4.

Feb 1, 2020 Alan Robinson 32690
Geese are not friendly creatures. Anybody who has visited a zoo as a kid, or managed to accidentally cross one in the wild, is no doubt aware of...