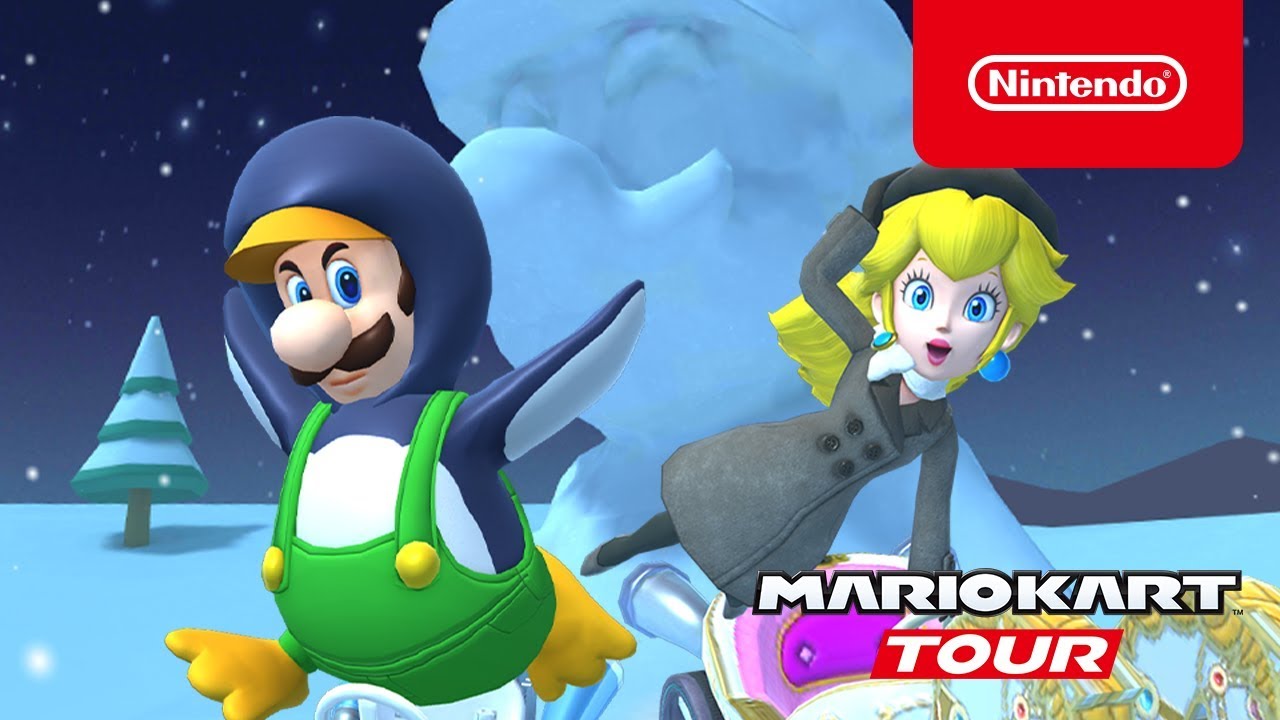 Another year, another tour in Mario Kart Tour. This time everyone’s favorite characters take a slippery drive into the Ice Tour. New characters, skins, karts, and gliders are added as well as new maps. This is the same as every Tour, but this time, a slippery surprise is sure to catch even the best drivers off guard.

In total there are two new courses, four new karts, and three new gliders. Every tour brings a whole new set of challenges, stars, and fans to the tracks. Bundle up as it will be a cold one this time around.

The Ice Tour is here in #MarioKartTour! Are you ready for some heated races on the ice?
Follow the link for more #MarioKartTour videos!https://t.co/BY3erIKTF0 pic.twitter.com/0N3NCUrQzo

Wintertime Peach and Penguin Luigi are the Ice Tour’s High-End Spotlight drivers. These drivers are only available while the event is in session, so be sure to try and get them while you can. Ice Mario will also be in attendance but will not be rotating out at the end of the event. He will be remaining as a regular High-End driver.

Wintertime Peach will be the first of the two available during this event. Later the pipe will feature Penguin Luigi, so you do not have to get both at the same time. It is also important to note that Ice Mario and Penguin Luigi will both come equipped with the new Ice Flower Item, so get it while you can.

Vanilla Lake 1 from the SNES and Frappe Snowland from the N64 will be making an appearance on this tour. Both are great tracks covered in a racers worse nightmare, Ice.

Players will be happy to see that the Blue Seven, P-Wing, Gilded Prancer, and Ice-blue Poltergust have been added as new karts. They compliment the ice theme of the entire tour giving an extra slippery boost to those who know how to race on these tracks. The Gold Swooper, Blizzard Parasol, and Blizzard Balloons have all been added as new gliders.

Players that have the Mario Kart Tour Gold Pass subscription will have a chance at the exclusive Black B Dasher kart and Gold Swooper glider as tour gifts. Subscribers and non-subscribers alike will receive a Shy Guy as a tour gift.

The Ice Tour event will be running from now until January 28, 2020. For those who have not downloaded the game, Mario Kart Tour is free on Android and iOS devices. It is considered an authentic Mario Kart experience on mobile devices despite its watered-down appearance. This game continues into 2019, racing its way into fan’s hearts everywhere.