The Hunt Is On—Monster Hunter World Sees A Month Of Events, And Appreciation Courtesy Of Capcom 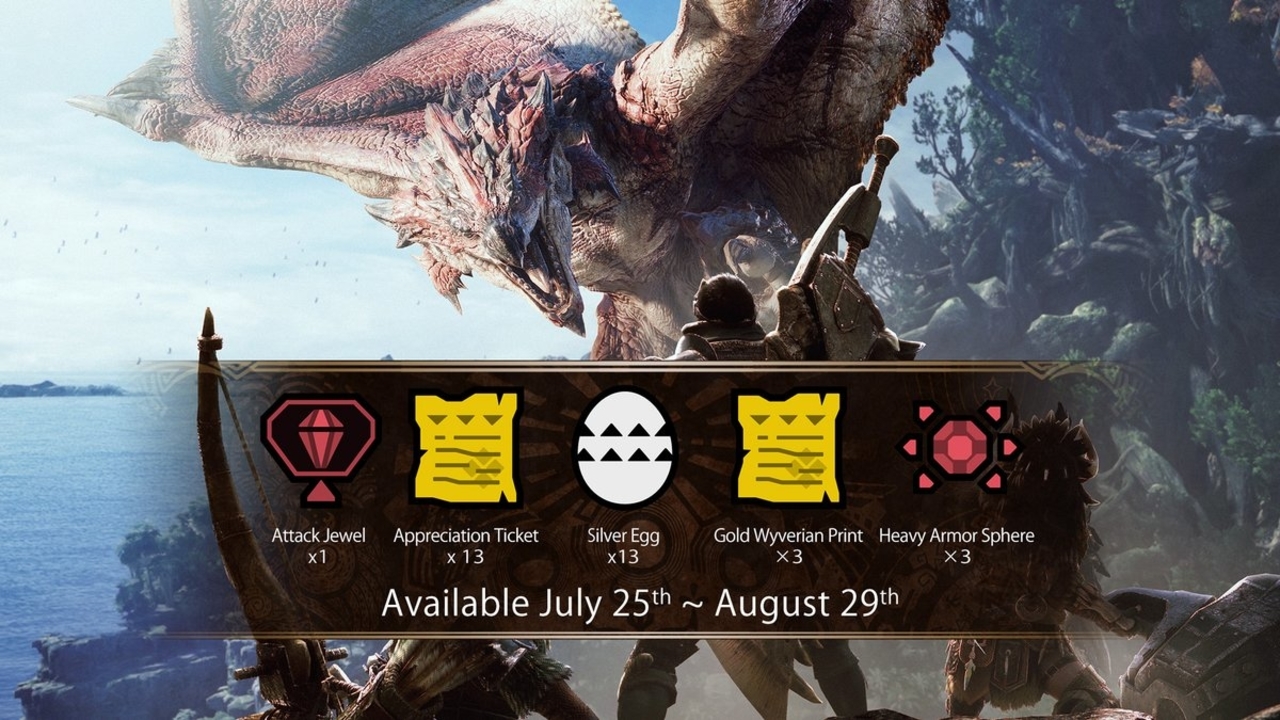 The tail end of summer and the start of fall have something on their minds, and the name of the game is Monster Hunter, in this case, PS4/PC/Xbox One title Monster Hunter World.

When Monster Hunter World released, many figured it would be popular, and they were right—they just didn’t know how right they would be.

Quickly becoming Capcom’s highest-selling game within the first year of its release, the sales continued to climb, and at the time of this writing, the title has surpassed 13 million sales, and that number only increases daily. Even moreso now with the Iceborne expansion coming September of this year.

Capcom’s been watching pretty intently, and two big forms of appreciation are coming. The first is a 13 Million Celebration Item Pack, as a way of thanks to the players all across the world who purchased and played, and the rewards are pretty sweet.

We get 13 Silver Eggs, trade-in items worth 10k zenny (the in-game currency) each, betting a hefty total of 130k. Quite the nest egg (heh) to buy/upgrade armor and weapons.

Then 3 Gold Wyverian Prints, highly valuable trade items that can be used to craft materials in-game, including elusive gems, the rarest drops a monster can give.

Then 13 Appreciation Tickets (sensing a theme here), trade-in items that can be used to forge special event weapons and armor, including the very formal and fashionable Gala Set from the anniversary event.

Then 3 Heavy Armor Spheres, the highest-grade ingredients for upgrading armor.

But the biggest draw is the final reward, Attack Jewel.

Jewels (also known as decorations), are items that can be attached to equipment to provide special skills, and the Attack Jewel is considered one of the rarest in the game, at a drop rate of about 0.05%, and that’s if you even get the unappraised jewel that might have it, which is a whole other layer of RNG.

Given that it boosts attack power in increments, and critical hit affectations at higher levels, it’s highly coveted, and difficult to find to the point of near-impossibility, with players having gone hundreds of hours without seeing more than the one given to you near the beginning of the game. If there’s a surefire way for Capcom to show appreciation, that’s certainly it.

But it doesn’t end there. The truly great news is the flood of festivals coming.

Seasonal festivals, where players can earn special tickets for items and gear, along with special events, became a regular occurrence in-game, with many a player looking forward to playing them due to the rewards they provide.

This time, all four seasonal events, plus the anniversarial Astera Fest, are coming, for five weeks of incredible hunting. Talk about a festival of festivals! If there was anything you missed out on in the past, like the Wyvern Ignition “Impact” Greatsword, the fearsome Greatest Jagras, of any of the dreaded Arch-Tempered monsters, you’ll get plenty of chances to cash in! The scheduling for the festivals is listed below: July and August are looking to be great times to be a Monster Hunter World player, and it’s a lovely thank you from Capcom, as well as a good ‘send-off’ before Iceborne cometh September 6.

The hunt is on, and here’s hoping you fellow Hunters get all you’re looking for when they come! In the meantime, stay and play savvy, gamers!