Back in August of 2014, the family of the “My Brother, My Brother, and Me” podcast – Justin, Travis, and Griffin McElroy – began a Dungeons & Dragons podcast, along with their father, Clint. Dungeon Mastered by “babiest brother” Griffin, the podcast was named The Adventure Zone and began to spin tales of whimsy and hilarity that often crossed into more serious heartfelt storylines.

The brand of The Adventure Zone spread across a few different mediums. While it started as a podcast, it didn’t take long for fanmade animations to start popping up all over the internet. The whimsical adventure has even be turned into print, appearing as a visual novel in major retailers.

Now the time has come for The Adventure Zone to branch out into their next adventure. The new game, Bureau of Balance, became available for pre-orders recently. Designed by Twogether Studios’ Keith Baker and Jenn Ellis, as well as with illustrations by Hari Connor, the game has been created by good hands and great minds.

Pre-orders for #TheZoneCastGame are now OPEN! Designed by @Twogetherstudio, the game is available for pre-order through January 24th, with plans to ship in August 2020. Head to https://t.co/yPqhSBaMYP to snag your copy, learn more about the game, pre-order perks & more! pic.twitter.com/01E6vuWiRB

To quote the official website, “Bureau of Balance is a storytelling card game that lets you and your friends build your own stories in the world of The Adventure Zone: Balance. It’s an easy-to-learn and accessible game that doesn’t require any experience with fantasy roleplaying games or deep knowledge of The Adventure Zone; all you need is a few friends, an hour, and a little creativity.”

Bureau of Balance is already available for pre-orders at a price tag of $39.95 (which is a solid deal, if you’re familiar with the board games that often cost upwards of twice that price). The pre-order is available through January 24th and provides a few perks, including becoming a member of The Reclaimer Club. Becoming a Reclaimer provides exclusive perks and rewards, such as additional in-game “Fantasy Kostco” loot, as well as a few more exclusive cards.

If that sounds great, there’s also a Limited Edition of the game up for pre-order at the moment. This Limited Edition pre-order comes with special box art, four additional D20’s, five upgraded player assist coins, and a 3D Fantasy Kostco cardholder. The Limited Edition can only be acquired through this pre-order but costs a bit more at $59.95.

The pre-order won’t be available forever, with just a bit more than a month left until the time window runs out. Whether you’ve been supporting the sweet boys of MBMBaM for years, only care about The Adventure Zone, or have never heard of any of these jokers, there’s no better time to jump into the Adventure Zone than now. 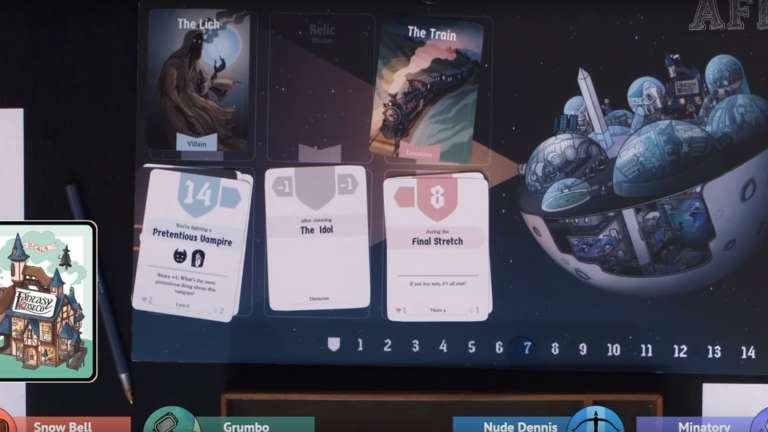