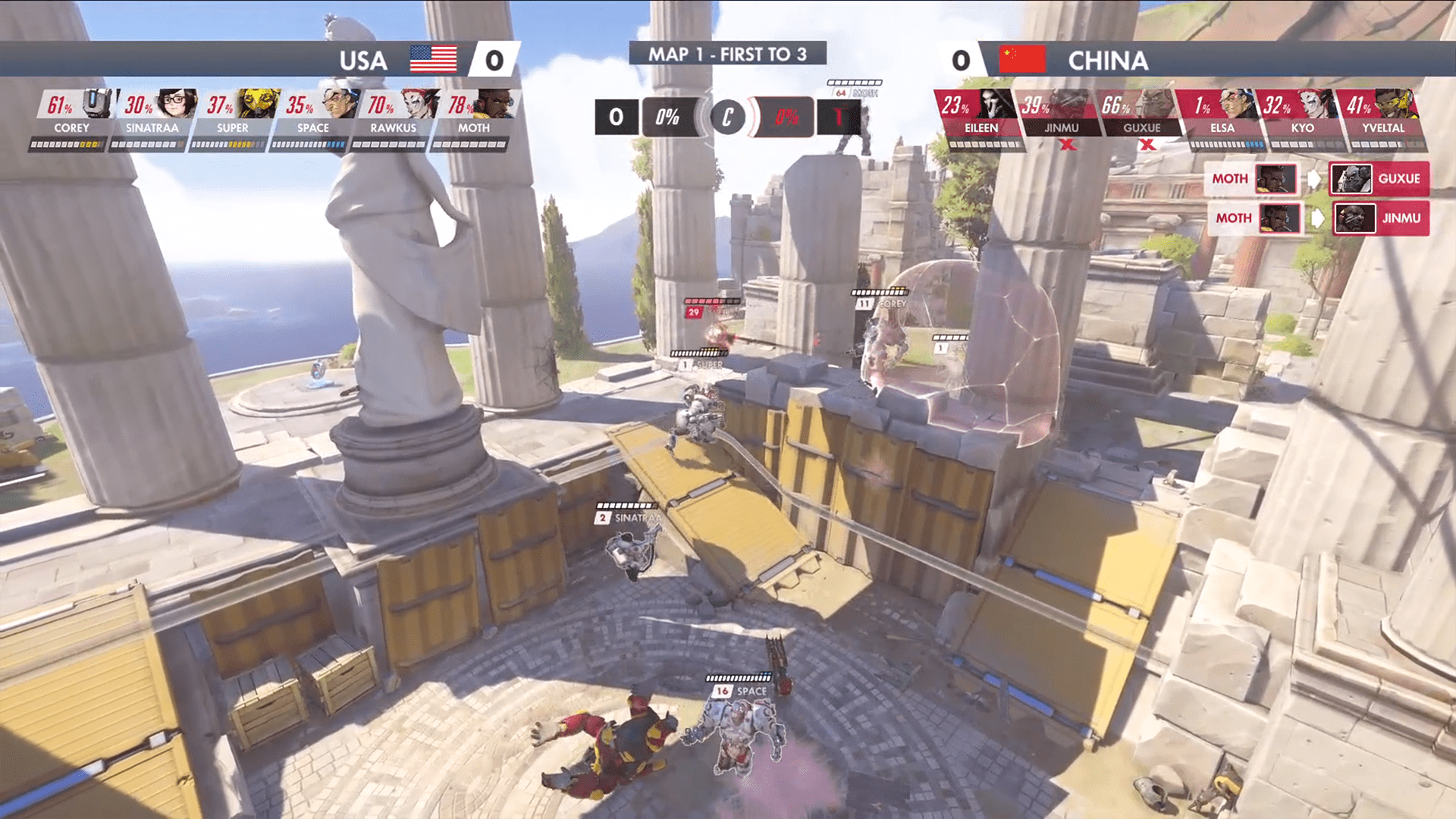 Three days of non-stop Overwatch has brought peaks and valleys to the hero-based-team shooter, with desperate combat being highlighted between nations.  From the brutal scraps in the preliminaries that eliminated multiple countries before they could even get onto a stage, to a nasty group stage that saw South Korea suffer their first taste of World Cup defeat, this Overwatch World Cup has been a great one to watch.  Now, on Saturday evening, it has culminated in a gigantic East vs West mash-up of the USA versus China.

China has shown dominance in their group stages, defeating the surprisingly strong Russian Federation in a clean sweep, and France in the playoffs.  Team USA, on the other hand, hadn’t lost a single map across the entirety of the playoffs.  USA has been led by the relatively new dynamic duo from San Fransico Shock, ‘Super’ and ‘Sinatraa’.  With this duo playing main tank and DPS, respectively, a shimmering of the Shocks dominant strength has shone through team USA in multiple plays.  The series followed a ‘First to 3’ format that the World Cup has followed through preliminaries and group stages; if five matches were played and neither team had won yet (due to draws), only Control-style maps would be played until a winner was decided.

It's @USAOWWC vs. @owwcteamchina in the 🥇 match. WHO'S WINNING THIS THING?! Tell us below 👀

Team USA was clear favorites of this series, based off of roster strength along with previous showings in the cup thus far.

The first map selected was Control in Illios, played to an international crowd cheering so loud that they occasionally drowned out the casters and hosts.  China clutched the first map at a 99/99 spread, and the USA responded second with a clean win at the ruins.  The third map to decide the initial point was Illios well, and the team continued a slugging match with the capture percentages maintaining relevance to each other as the control point alternated between the two juggernaut nations.  Team USA won the third match at 100/85 to a deafening roar.

The second map was the legendary Kings Row, with China attacking first.  China opted to bring out the ‘Dive meta’ with Winston and Genji being current off-meta picks that China brought to bear.  Team USA countered with an off-meta pick of their own, and ‘Corey’ brought out his signature hero Tracer, dealing havoc across China’s support line.  China was eventually able to crack the first point, which led to a steamrolling across King’s Row that was only stymied 80% through the map by ‘Space’ playing a fantastic Sigma.  Corey brought out Bastion at a desperate final point hold, and China was unable to complete the push.

With sides swapped, USA found themselves on the attack with China defending the cart.  Not to be outdone in terms of attacking-flair, Super came out on his signature Reinhardt that hasn’t been in meta since the day GOATs died.  It took ‘Super’ three deaths to generate enough Ultimate charge to pull a shatter, and then it was used with no purchase against China.  The USA quickly switched back to modern meta after the failed attempts, and took the first point.  With the first point cracked, team USA had the opportunity to begin their steamroll of King’s Row streets, passing by point B with a faster time than China.  Corey dove deep into China’s backline and began letting slip the dogs of war as he held both the tanks and support line by himself.  The pincer-attack pressure was too great for China to be able to mitigate, and Team USA finished King’s Row with almost three full minutes left.

At this point, China found themselves with their backs against the wall; Team USA was only one point away from hoisting the Overwatch World Cup trophy about their heads and walking away with the gold medal.

The third map was Dorado, and China once again found themselves on defense against the payload.  China noticeably brought a Sombra to first point defense, a unique hero that allows both stealth and ability mitigation.  Surprisingly the Sombra pick allowed a fantastic development of defense for China, holding the initial entrance for a solid two minutes until the first point was cracked.  The Sombra continued to lead the defense for China, setting her EMP Ultimate off multiple times which allowed China an easy clean up of the attacking US.  Despite impeccable Sombra play, team USA broke through the second point with superior team-tactics, stomping China’s more individually-based play.  China stopped the payload with 0.16 meters left to the final point, and with ten seconds left Team USA began a desperate assault on the payload to finish the map.  A gamble of an offensive found China on their backfoot into their own spawn, and the USA completed the map in Overtime.

China found itself an opportunity to attack Dorado, getting stopped multiple times on point A until they finally managed to break the point.  Point B found them even further in the ‘bad-time-swamp’ as the USA began spawn-camping them after multiple team wipes.  Frustration was visible on Team China’s face as their individual plays couldn’t match the teamwork that Team USA clearly had nailed down, and China failed to break the second point.

Tears and hugs were found in spades as the United States brought home their first Overwatch World Cup gold medal, with a beautiful trophy to boot.  China heads home with the silver, comforted that they could at least continue to bully Hong Kong.