Should You Do The Wayne Rooney Premium SBC In FIFA 21? A Classic Card For A Good Price

Wayne Rooney receives a Premium SBC in FIFA 21, a 91-rated card with 95 shooting. English, in the Championship (playing/managing an ultimately struggling Derby County) and available for around 400k, this card is pretty good value for money. The card celebrates Wayne Rooney’s career and is worth doing for the nostalgia or novelty value if anything.

I waited to write this review until I got a few more games under my belt with Rooney, and it was worth it. Although Rooney’s dribbling statistics aren’t amazing – he has only 80 Balance – the card still feels great on the ball. It was the only problem area for the card at first glance, and it’s not an issue.

RELATED: Worms Rumble Will Be Free To PS Plus Members When It Launches In December

A new End of an Era Squad Building Challenge Player is now live in #FUT.#FIFA21pic.twitter.com/2pU2yRokxS

RELATED: Control: Ultimate Edition Is Now Out And Includes The Foundation And Awe Expansions

Otherwise, Rooney’s stats are fantastic. He has 4-star, 4-star, and Medium-High work rates. With the excellent physicals, shooting, and dribbling, he can play upfront or in a more central position. Here’s a closer look at the stats thanks to FUTBIN: 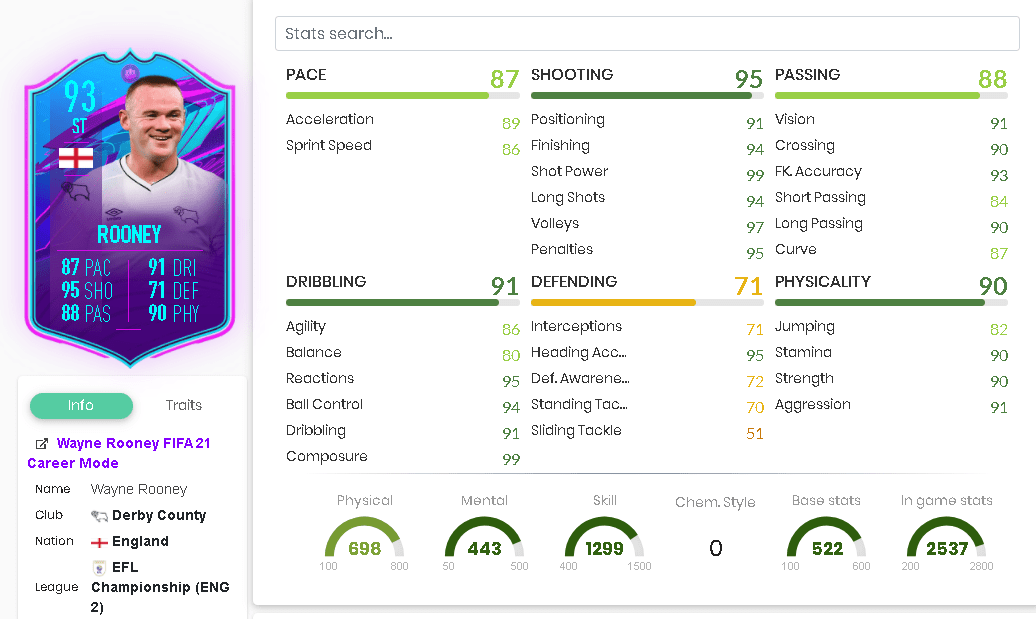 The area that really stands out is the shooting. With 90+ in every stat, this card finishes just about anything, including some pretty crazy outside the box shots and finesse curlers. You can look past the 4-star weak foot because everything else works just fine.

Rooney’s Dribbling and Physicality stats are also great. Even though the card only has 80 balance, the 99 composure and other high dribbling stats do make up for this. Even the Stocky body type doesn’t hinder Rooney too much in the box.

Physicality is another area where this card excels. Dribbling and twisting in the box are made simpler with Rooney’s 90 Strength and 91 Aggression. He’ll also fight to win the ball back on the edge of the box.

Is the card worth it for 400k? Well, it’s a special kind of card and one that celebrates a player’s entire career. Even though it’s hard to link – being in the Championship – it’s still an English card and you can link it with Icons.

For the money, you’re getting a pretty good card. When you consider that Harry Kane’s Halloween card is still sitting at around 1.5 million coins, this Rooney card is pretty much a no-brainer if you’re looking for an English super striker.

This is also a period of FIFA 21 when you can craft cards through objectives, SBCs, and upgrade packs. If you can get this card for cheaper than 400k, it’s an absolute bargain and a good deal from EA. Probably better than any TOTY content…