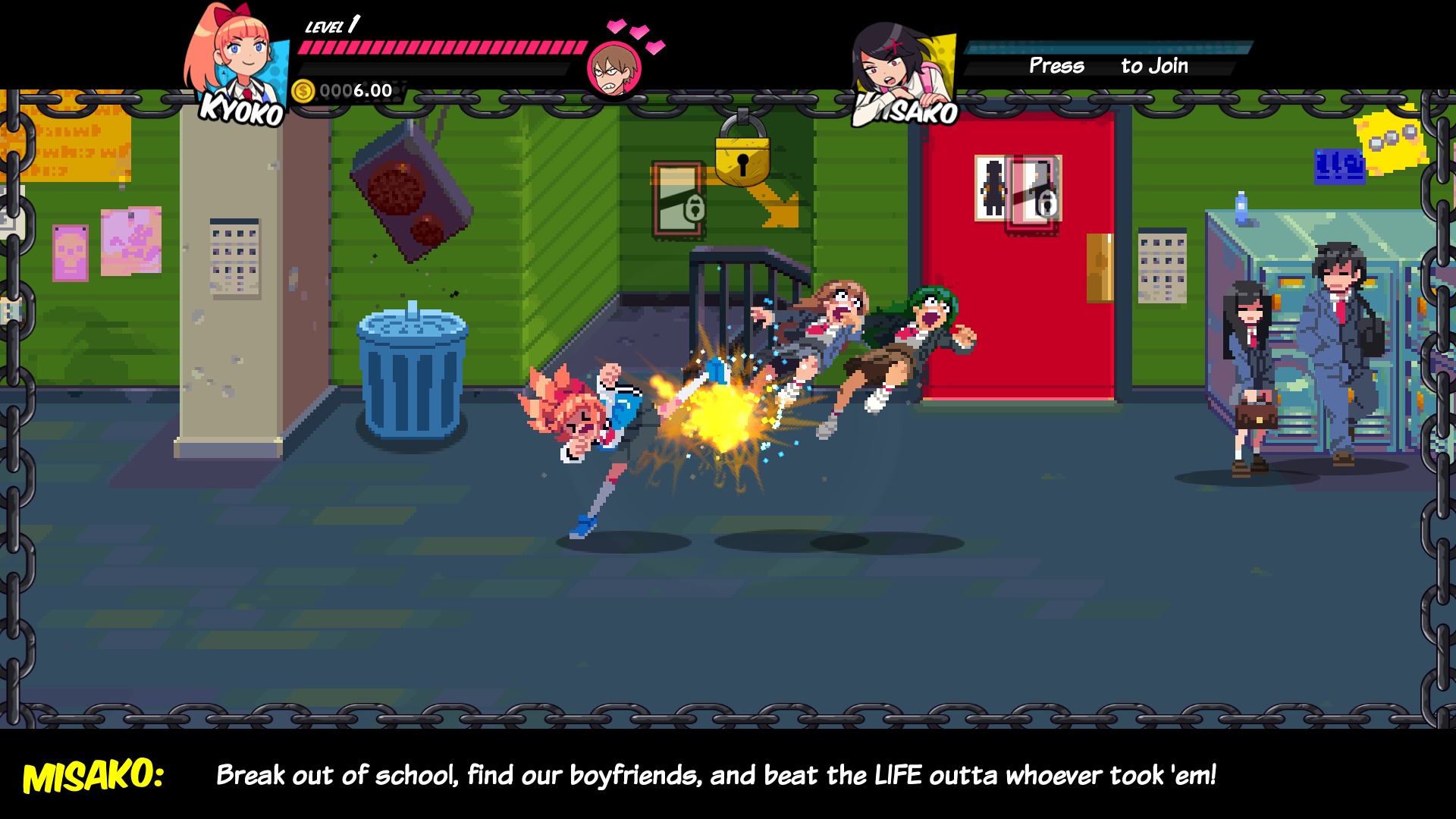 From the first instance River City Girls was announced, hype began building at an alarming rate. And given the legacy the words ‘River City’ carry, that’s no surprise. The classic side-scrolling beat-‘em-up won the hearts of many in its heyday, and another entry in the series was as welcome as it was surprising.

The question remains: does it live up to the hype? In this writer’s opinion, it doesn’t. It exceeds it.

The colloquial term for retro is “so old, it’s cool.” And in a world populated by games that push the boundaries of fantasy and reality in presentation, where we have incredible landscapes and character design so intricate you can lose yourself in them, River City Girls arrives in 2019, a pixelated throwback to long hours at an arcade terminal, mindful of the quarters in your pockets and keeping a watchful eye out on your limited lives. 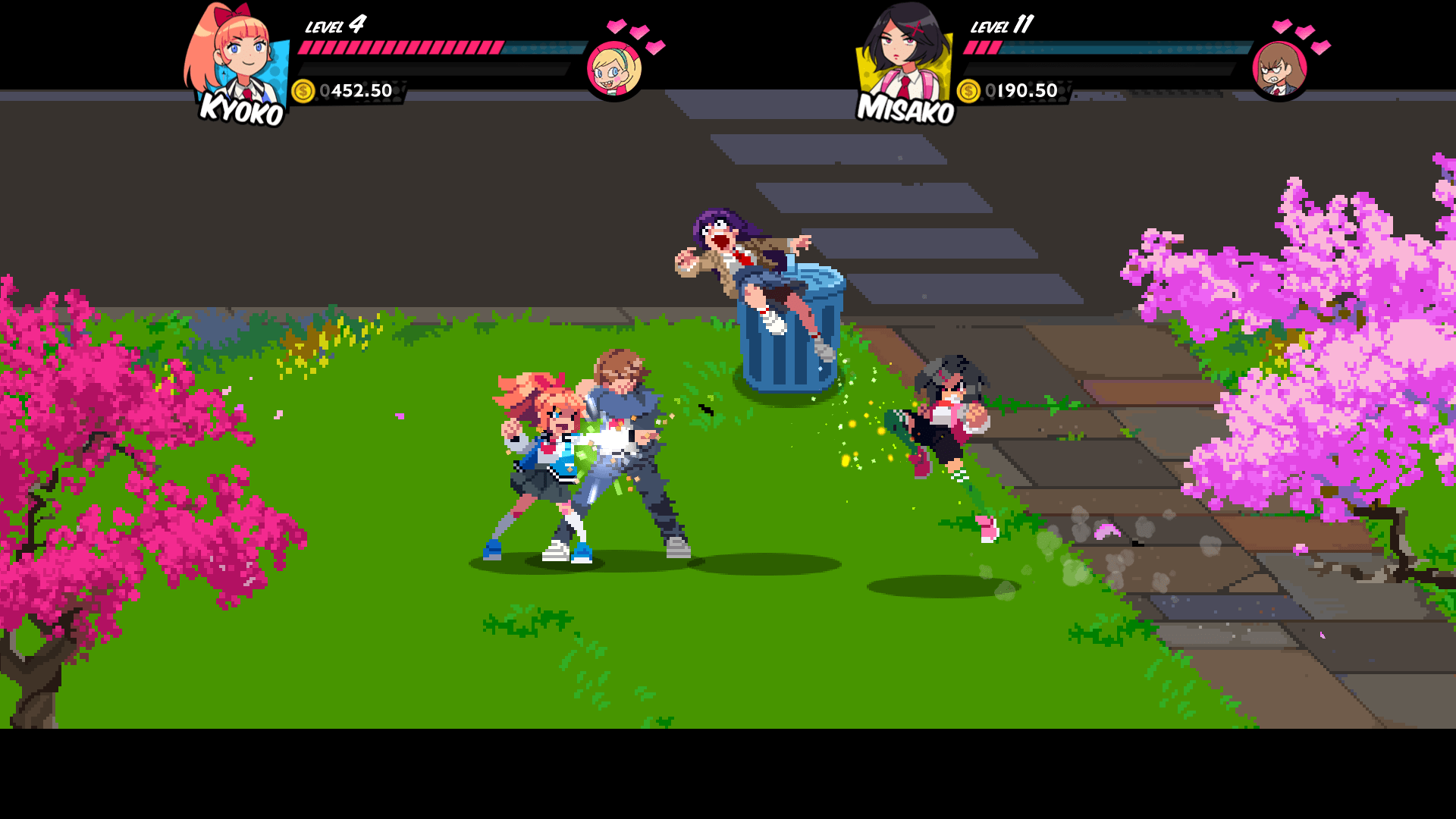 The plot is a twist on the original Kunio-kun game; the boys are in trouble this time, and space cadet Kyoko and wild and weary Misako set out across the six zones of River City, hunting for answers to where their boyfriends are, and beating the absolute stuffing out of anyone in their way. Which is a LOT of people.

The gameplay has been seamlessly adapted for the modern era; controls are fluid and simple, your simple cache of moves evolving into a full-on armory as you level up, or spend in-game currency at the dojo. From dropkicks to high kicks, to backpack swings and rising uppercuts, you’ll make a mockery of the martial arts and mincemeat of any mooks who might’ve made off with your mates (I’ll stop). Some moves require special meter, which is easily recovered via attacking your foes. Feel free to use them with impunity, just make sure they actually land; the meter depletes whether you hit or not. Another fun twist is the recruit system, where sometimes a solitary enemy will beg for mercy. There you have the option to keep bringing the pain, or temporarily recruit them to your side as an assist character. As the enemies colors change, so to do their stats and backstory, leading to a fun sort of “collect them all” aspect. 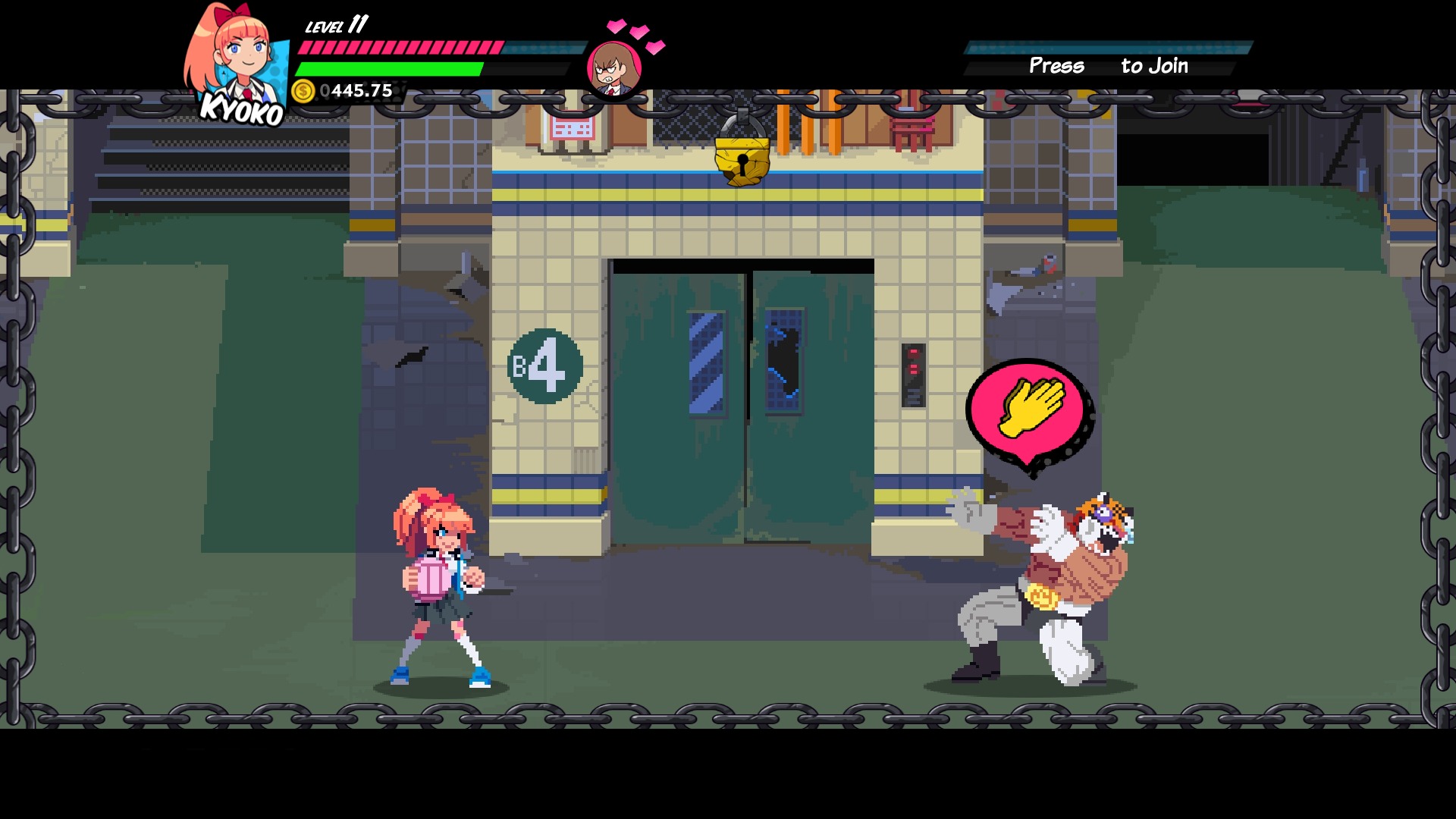 But the game is indeed keen on delivering that nostalgic sense of classic street brawling; enemies will come in from left and run, gunning for you like you stole something, and you’ll often find yourself running frantically back and forth across the screen to pummel enemies so you don’t get surrounded. And as you progress and get stronger, the game will really start making you work for those victories. You’ll need to go beyond simple button mashing and form battle plans, string together combos, use whatever you can, whenever you can, because your enemies will, too.

Talking of enemies, River City Girls brings us a cast of bosses that wouldn’t be out of place in a Studio Trigger anime, and fit right at home in the colorful, madcap world WayForward has brought us. An Amazon capable of punching through solid wall, an emo magic user with a serious misunderstanding of how love works, and a short fashion designing maven with a shorter temper and a spider cosplay penchant are just a few of the denizens of River City that you’ll meet—and beat—to get your boyfriends back. 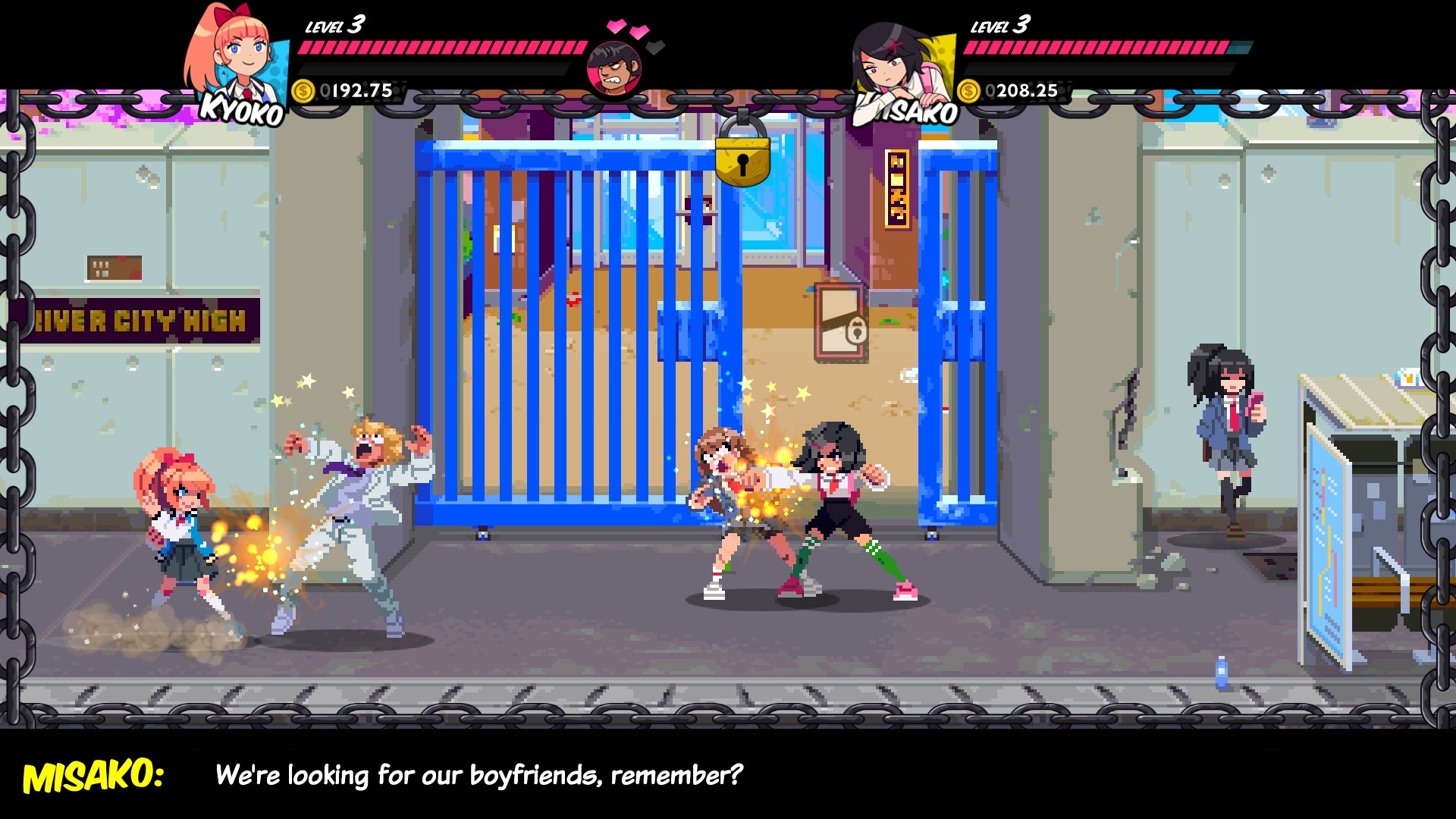 The game can get brutal at times, however; health doesn’t recover between zones, and death, while not impeding your progress, robs you of money, and between purchasing moves, accessories to power yourself up, and items to recover your health in the thick of battle, you’ll find it depleting rather quickly. Thankfully, enemies are in enormous supply, and they always carry cash.

Story-wise, buckle up. The introduction is told is a familiar manga-style format (and reappears throughout the story), along with anime-styled introductions of the boss characters. You won’t be starved for content or action as you blitz through River City Girls, whether solo or alone. The game features drop-in multiplayer, and even the option to turn on friendly fire for an extra layer of challenge (or masochism). Two is better than one, but the game doesn’t punish you for being a lone wolf, thankfully. 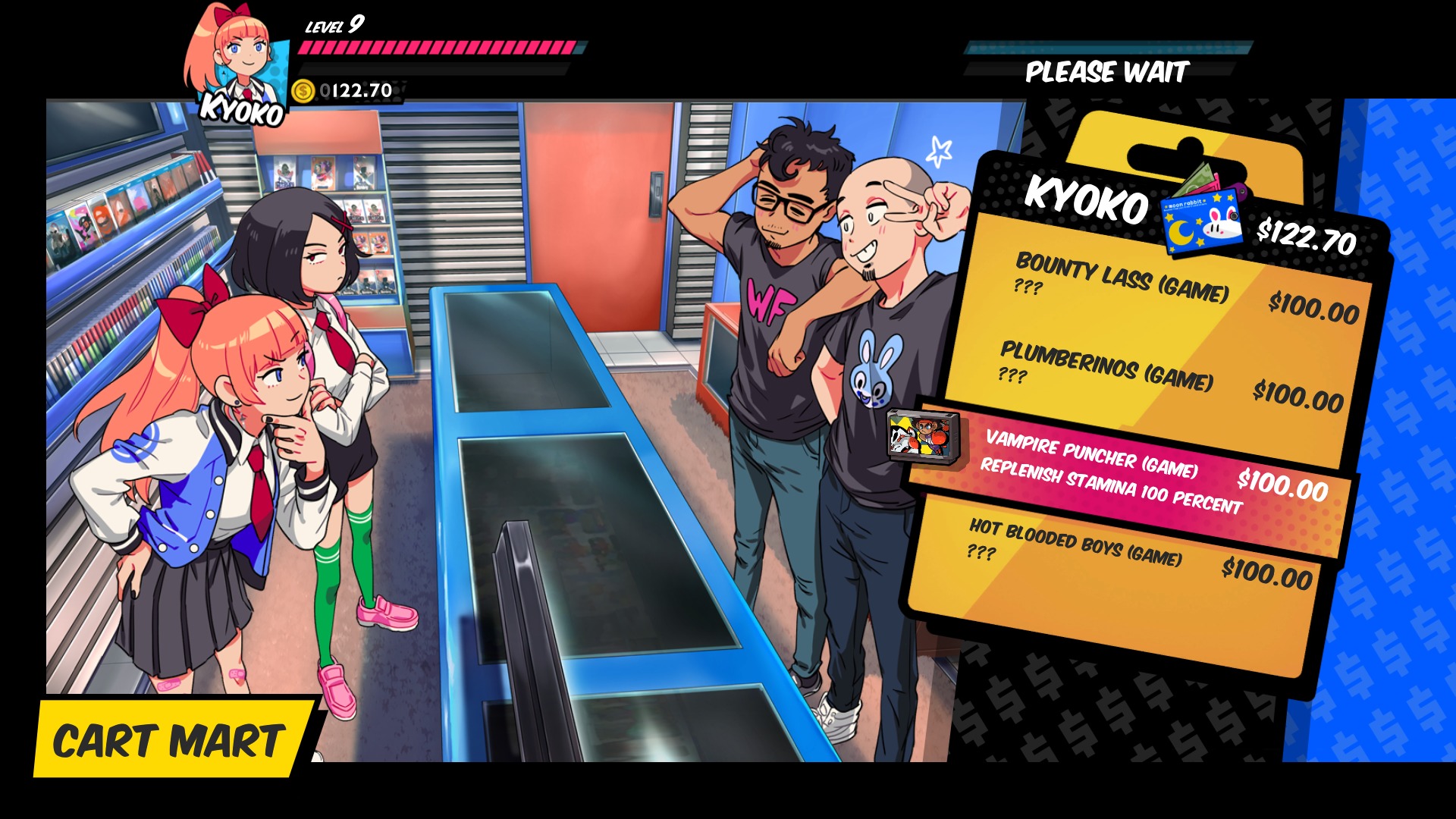 River City Girls arrives September 5th, 2019 for Nintendo Switch, PC, PlayStation 4, and Xbox One, with a special collector’s edition in development by Limited Run Games for Switch and PS4, featuring a physical cartridge/disc, along with several goodies including ID badges, reversible posters, a physical CD, and more.

Until next time, stay and play savvy, gamers!

Sep 27, 2022 Tom Lee 260
A portrait of Mimikyu by a gifted Pokemon enthusiast, painted by hand on a tiny canvas, has received nearly universal praise. It's no secret that the...

Sep 27, 2022 Michael Gunn 220
Two new Pokemon with a Halloween vibe are coming to Pokemon Unite in the next few weeks. Sableye and Zoroark have been revealed as the next Pokemon...

Sep 26, 2022 Tom Lee 790
Even more cutscenes and the Squid boss fight from the demo for Sonic Frontiers have been leaked. In addition, fans may get a taste of games like this...