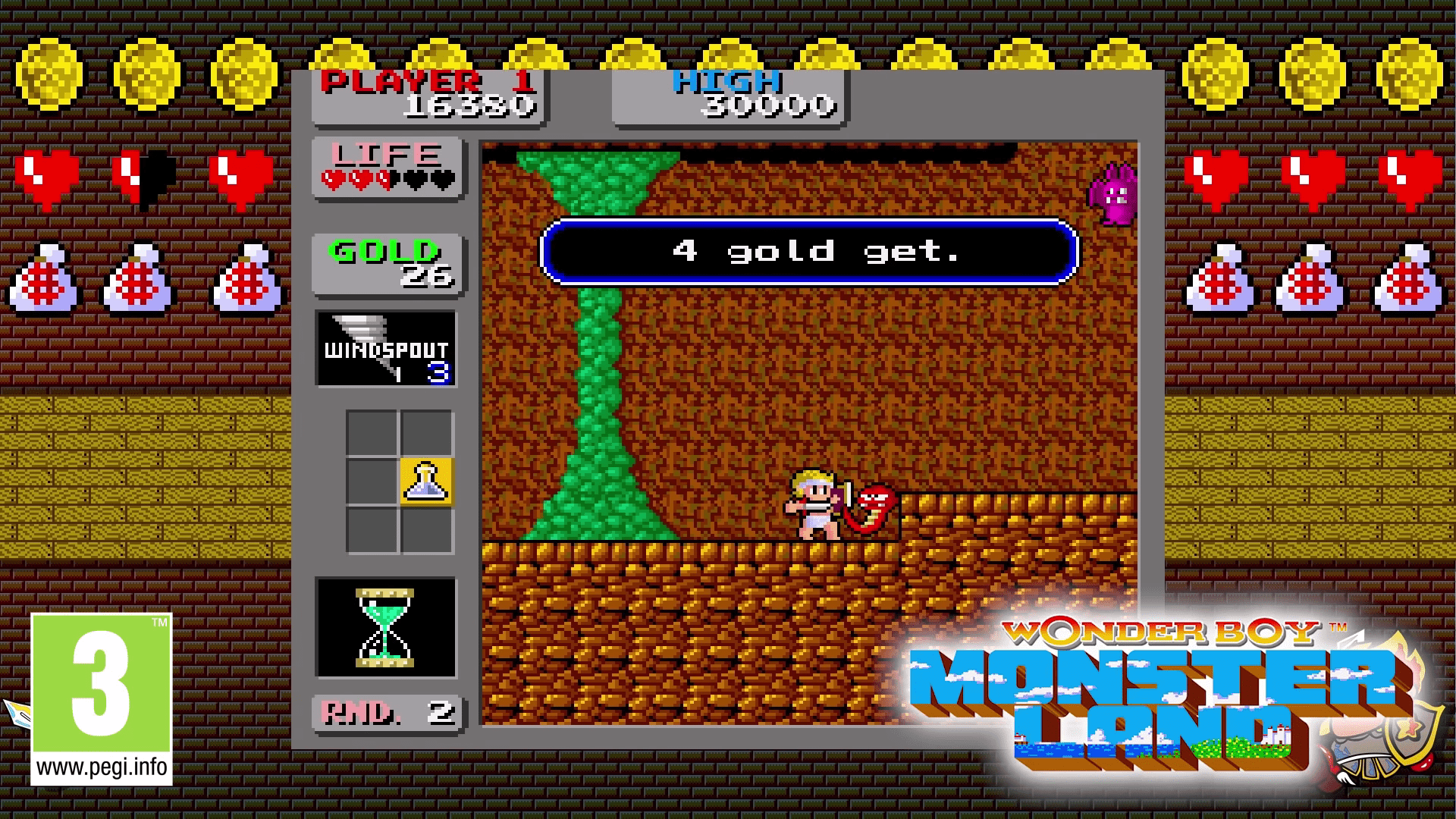 SEGA AGES officially released Wonder Boy: Monster Land today for the Nintendo Switch. The classic arcade game can be purchased in its original form at the Switch Game Store by fans of the classic Wonder Boy series or anyone curious about the old-school action RPG.

The original game was first developed and released for arcade play approximately thirty years ago, in 1987. Sega quickly ported the game to its first home console, the Sega Master System, one year later in 1988. The Wonder Boy series follows its main character, Tom-Tom, also known as Wonder Boy, as he fights against evil MEKA dragons. Monster Land is the sequel to the first Wonder Boy game. The series has achieved cult classic status in recent years, mostly due to nostalgia of older gamers and ’80s arcade fans.

The new port stays original to the 1987 version of the game. It is one part 2D-platformer and one part action-RPG. The role-playing elements aren’t particularly extensive but stem from the player’s ability to collect gold and equipment to upgrade their character.

Sega developed the game with the intent of keeping to the original arcade spirit as much as possible. The game has a single button that emulates so-called “joystick rattle,” an old arcade trick players would use to cheat the original mechanics. In the arcade version of the game, players could rattle the joystick back and forth quickly to exploit the game for more gold at certain locations on the map. In the port, players will be able to turn this feature off at any time.

Fans of the Wonder Boy series have continued to receive great news lately. In May, Wonder Boy: The Dragon’s Trap was released on iOS and Android for mobile players. That port included updated hand-drawn characters and backgrounds, musical scores, and other additions. But it also allowed players to switch between the classic 8-bit version and the updated homage to the original—even in the middle of gameplay.

SEGA AGES, the port’s developer, is a Sega project that aims to port all of the older Sega arcade and home console games to modern consoles. It was first established in 1996 for the Sega Saturn and has been steadily chugging along ever since, now with Xbox, PlayStation, and PC.

Wonder Boy: Monster Land can be found on the Nintendo Switch Game Store for just $7.99 in the United States. Grab it up for a few hours of fun and to see what early gaming was all about.

May 26, 2020 Harry Alston 10550
Wildfire is a game that has flown under the radar and you'd be forgiven for missing its May 26th release on Steam, GOG.com and Humble. Developed by...

Apr 23, 2020 Harry Alston 6430
Every now and then an indie title really captures your attention, and in this case, it's Wildfire. Developed by Sneaky Bastards and presented by...

Feb 19, 2020 Harry Alston 10180
Stela is a new atmospheric puzzle-platformer on the Nintendo Switch, arriving on the Nintendo eShop March 13th, 2020. From Vancouver-based Studio,...