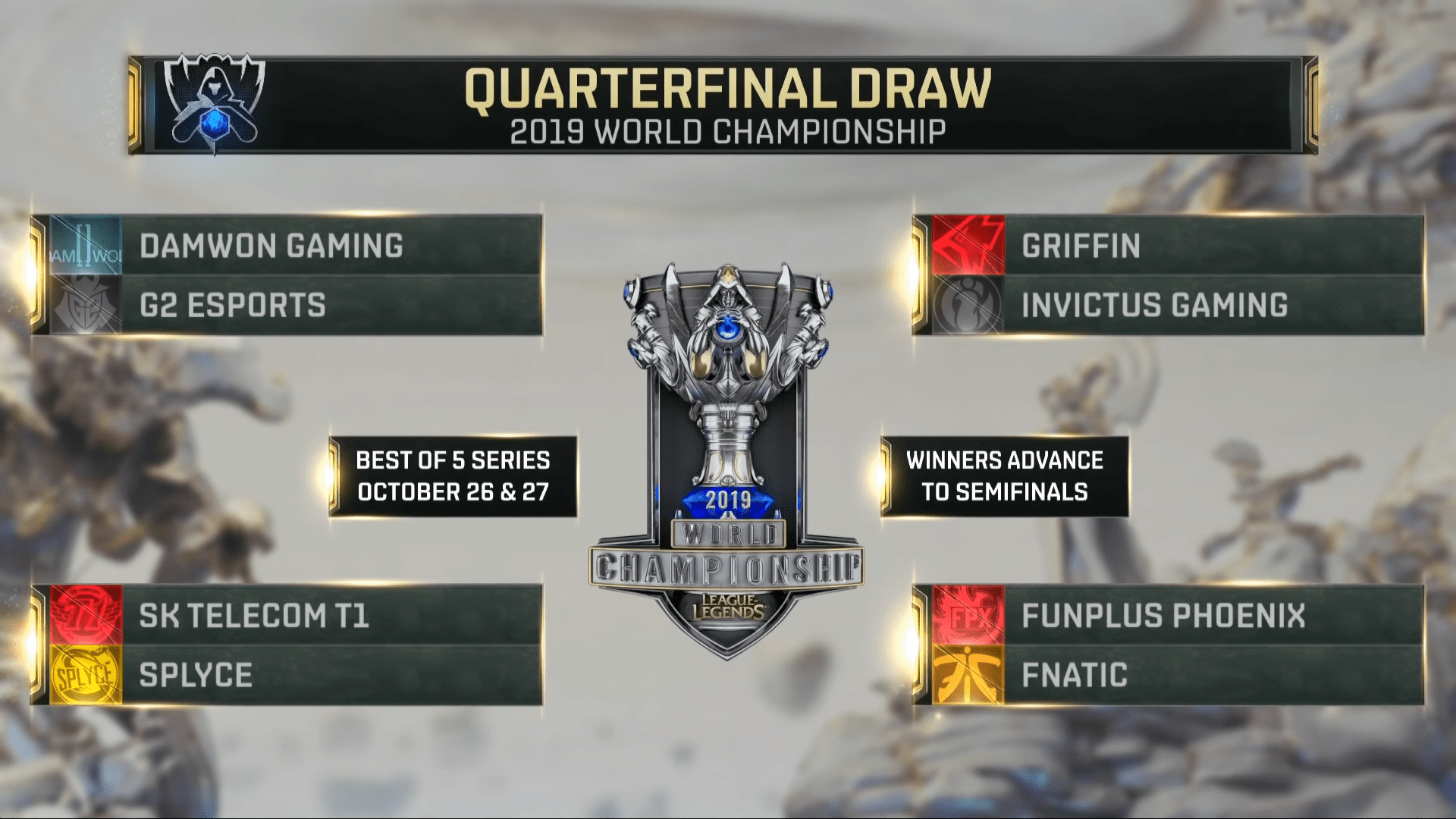 The League of Legends World Championship 2019 Group Stage concluded a couple of days ago, with the following teams emerging:

All three Europe’s and Korea’s representatives have joined the Knockout Stage alongside the first and third seed from China.

How does the draw work: all 1st seeds from every group are placed randomly to every corner of the bracket; after them, every team from 2nd seed got put into the empty spots of the brackets. There is one rule though, teams which were in the same group could not be opponents in the Quarterfinals.

Group A – Griffin looked shaky in the first few matches, while G2 Esports looked unbeatable during the first round robbin. During the second round-robin, the situation changed, and while Griffin was improving every game, G2 Esports started looking shakier, and every small mistake was being capitalized on by the opponents.

Group B – FPX looked quite weak after dominating the LPL season; they did not show such type of domination in their group, which was considered the group of life. They were contested as the first seed of group by the 3rd seed of Europe, Splyce, who qualified through play-ins and had a pretty good group run, with their traditional mid-late gameplay style.

Group C – SKT is the World’s contender, with three championships behind them and the greatest player of all time, Faker himself. They looked unbeatable in their games, only dropping a set in group stages to Fnatic, who was on a killing spree during the second round-robin and hungry to get out of groups. Fnatic almost got eliminated during the Group Stage after losing to both SKT and Chinese’s 2nd seed; Royal Never Give up during the first round-robin. They needed a miracle for the second week, and it happened, they won all three matches and managed to qualify in quarterfinals.

Group D – Fans expected NA 1st seed, Team liquid to get out of groups after finishing 2-1 alongside the Korean & Chinese seed. During the second round-robin, they were getting outmatched, and the Korean 3rd seed and previous World Champions advanced into the knockout stage quite convincingly.

Predictions for the next stage:

Tune in at Riot Games YouTube Channel see the quarterfinal matches in the upcoming days.

Nov 28, 2020 Chris Miller 12230
Here's a bit more Counter-Strike: Global Offensive drama, as if the scene hasn't been steadily imploding since the beginning of the pandemic with...

Oct 6, 2020 Richard Sebastian 5290
Early on, Gen.G was favored to win the entire 2020 League of Legends World Championship, but that was before they faced Fnatic. During the group...