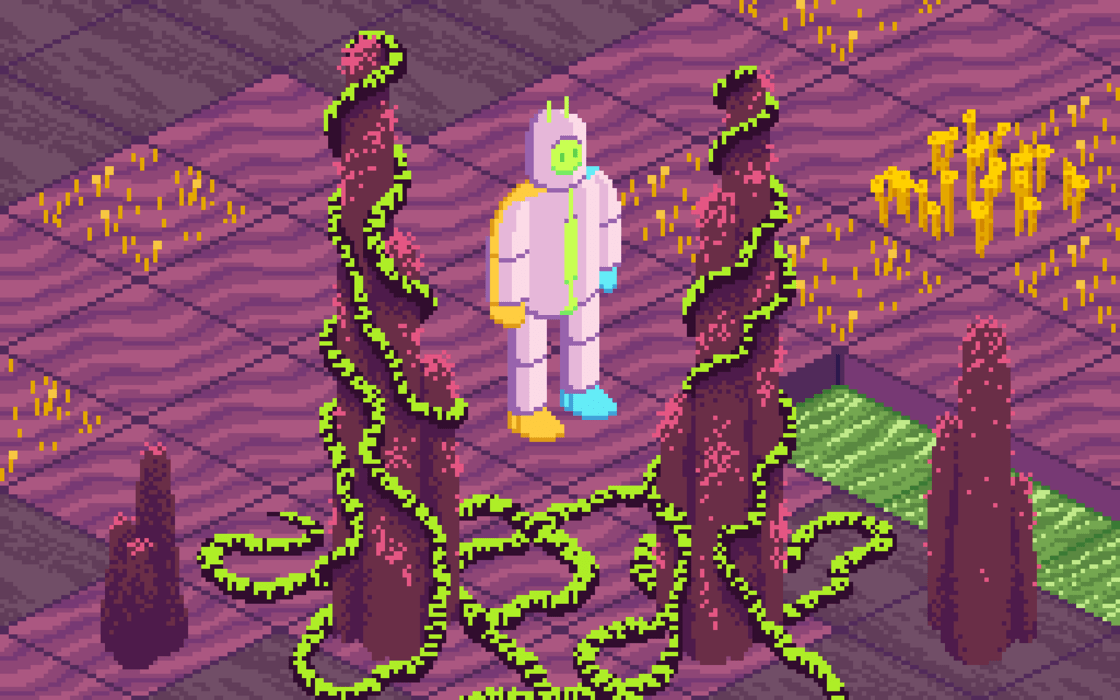 In 1981, a Japanese game developer Hiroyuki Imabayashi released Sokoban or “warehouse keeper” when translated in English. The game’s mechanics works by pushing boxes around in a warehouse and keep everything clean by getting them in their proper places. As the modern gaming world is concerned, nothing has come close to the real essence of the original video game in terms of isometric quality and gameplay structure.

Introducing, Xenopulse, a Sokoban-inspired isometric puzzle game where players explore an alien world. The game was developed in one week in time for the PIGSquad’s Summer Slow Jam event this month of July. The event highlighted some of the most notable and unique arcade games created to provide a unifying structure and collaboration opportunities for people in an around the city of Portland, OR.

The game was developed by Xan Collins, a full-time Illustration student at the Pacific Northwest College of Arts. Not to be compared with games created by big houses, this Indie entry to the PIGSquad event truly packs some punch and the reason it gained attention from participants.

A kind little feature of my #summerslowjams game with @retropetet and @aslrmusic! I'm glad our weird little 4D game caught somebody's attention and I really hope to work on it and improve it some more! Thank you @PIGSquad for giving me the opportunity to work on my first game! https://t.co/jkD7PW4EBF

Similar to the original Sokoban game, Xenopulse has a two-dimensional graphics with an isometric viewpoint. It is also a block-pushing game where the character has to move to every tile and push hindrances away. Though the game took just a week to complete, it is pretty impressive in terms of the game concept and character development.

One thing a player will quickly notice from the game is its quirky charm and how it is crudely yet wonderfully developed. Xenopulse revolves around a humanoid robot embarking on a space-colonization mission pushing obstacles like a mushroom, giant alien spiders, and bits of equipment pieces.

Gamers who were able to play the original Sokoban game will find Xenopulse very similar in terms of the game concept and gameplay adventure. Players will be required to plug water tiles or push blocks onto them, removing obstacles in the way. Xenopulse was a strange way of hitting home despite its simple gameplay and uneventful challenges.

The isometric environment and two dimensional rendered nature of the game also plays an essential role in taking players back to the 80s. For players who had a lot of fun playing the original Sokoban game, Xenopulse is a game that will surely bring back memories. It has an unassuming yet charming feel with puzzles that will be satisfying.

Aug 20, 2021 Harry Alston 4090
Humankind is a gigantic game: 4X at its most compelling, complicated, and addictive best. The combat system is fantastic, the art style and the...