The transfer season has officially started with the end of the Spring Split in the LCK. Gen.G head coach Choi “Edgar” Woo-beom has parted ways with the League of Legends team, the organization announced today.

“We wouldn’t be here without Edgar and his incredible contribution to the team,” Gen.G COO Arnold Hur said.

The rest of the statement indicated that the decision was mutual since Edgar wanted to take some time off from the professional League scene.

Since his addition to the team in 2014, Edgar was a crucial part of Gen.G’s core structure. Though the team’s performance was all over the place over the past five years, Gen.G stood out in the 2020 LCK Spring Split.

The team finished the regular season as the first seed but fell short against its rivals, T1, in the Spring Split finals. Despite getting swept at the end, Gen.G’s mid-laner Bdd was named the LCK Spring Split MVP. The entire Gen.G roster looked cohesive with this iteration with ex T1 jungler Clid carrying multiple games with snowballing junglers. The only experiment in the Gen.G roster was the support who they kept swapping in between games, possibly due to scrim results. Even though Gen.G was swept in the finals, this does not diminish their success since T1 is known for having a playoff buff which keeps granting them championship after championship.

Going into the next split, it’s going to be interested to see how will Gen.G work from now on, in most teams the head coach is one of the most crucial aspects of a squad and can elevate a bad team or can drag a good team down. It’s unclear what sort of role Edgar played in the roster, but based on Spring Split results the conclusion is that what he did was good for the team since it helped them finish first in the regular split.

Gen.G didn’t comment on any moves regarding a new head coach. Instead, the org thanked Edgar for preparing its current coaching staff for the next season. Though it’s not a clear indicator, Gen.G may decide to continue with its existing staff instead of making any coaching changes for this summer. T1 made a head coach change the previous off-season and it worked out wonderful. After kk0ma went to LPL, T1 acquired Damwon Gaming’s head coach, Kim who put up great work for the team.

May 28, 2020 Giorgio Delgado 1460
The transfer season has officially started with the end of the Spring Split in the LCK. Gen.G head coach Choi “Edgar” Woo-beom has parted ways... 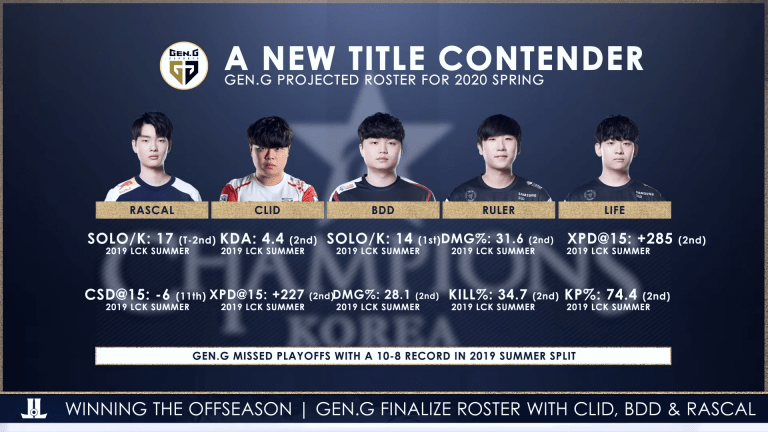 Nov 20, 2019 Giorgio Delgado 11270
Three days ago, GenG announced the departure of most players from the 2019th roster, extending contracts only with the bot lane players, Park...

Nov 20, 2019 Giorgio Delgado 2440
League of Legends team, Afreeca Freecs, has signed the ex-GenG mid laner Fly after his recent departure from the GenG squad. After a weak 2019...