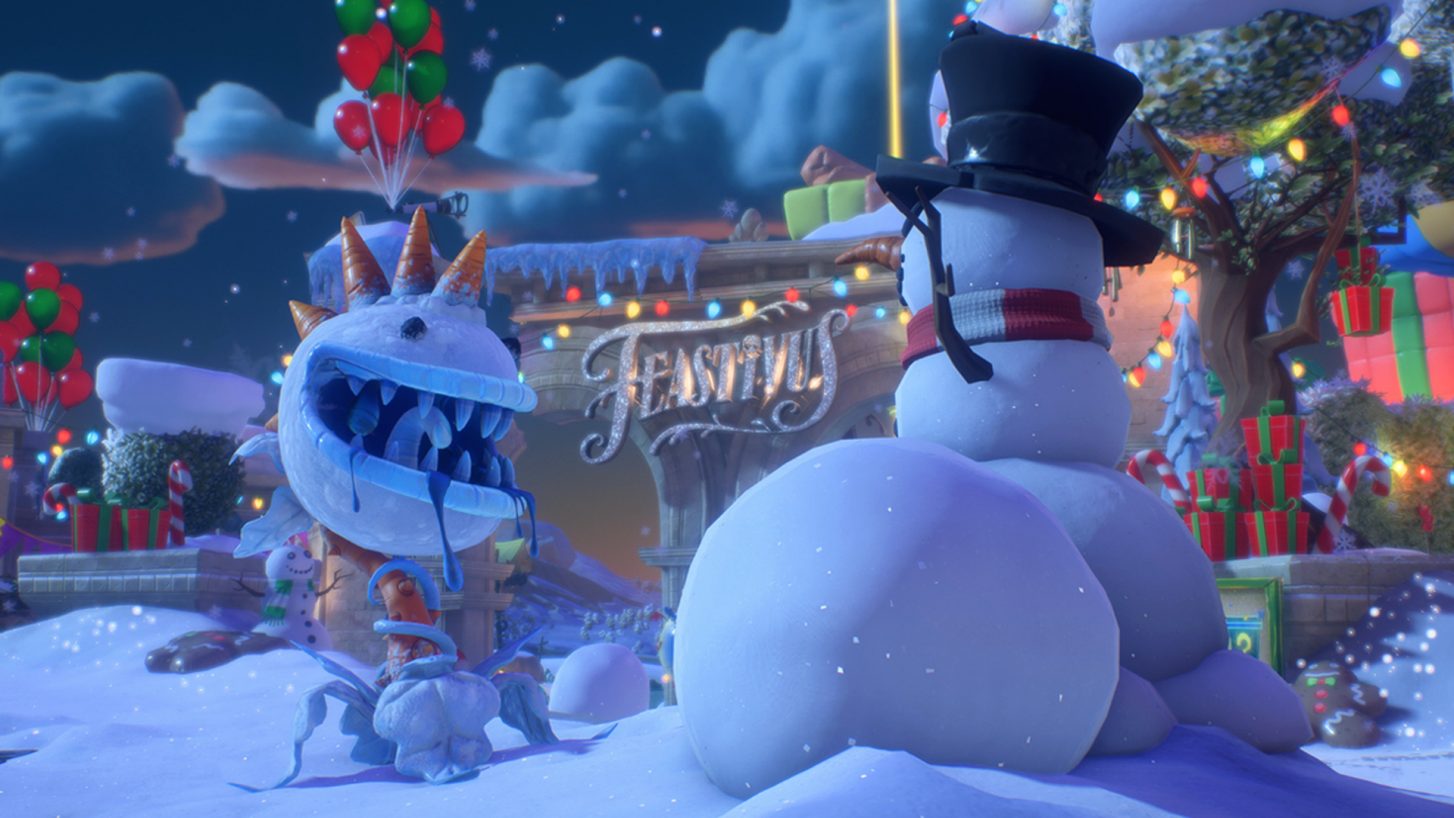 The folks at PopCap wasted little time getting into the holiday spirit. Plants vs. Zombies: Battle for Neighborville, the third-person shooter and second sequel to Plants vs. Zombies: Garden Warfare, is getting a Feastivus makeover with update 1.03, which launches today (or yesterday, depending on when this posts), December 2.

Giddy park will be all decked out with snow drifts, festive lights, and gift-shaped balloons. You can also win prizes in the form of three new costumes by working your way through the Feastivus Prize Map. Players can grab the Super Rare Abominable Chomper, Legendary Feastivus Master, and Legendary Inspiration Elf skins.

The update isn’t entirely aesthetic, either! Oozevoir, named so for the pink, bouncy ooze found all around the area, is a new map for the Team Vanquish, Ops, and Mix Modes.

Along with the new content, the update introduces a long list of new tweaks and fixes, which were inspired by feedback from the Plants vs. Zombies community. You can read about all of them on either the Electronic Arts website or the patch notes when you download the update.

The best part of this entire thing isn’t in the game at all. It’s the above video, which, if you haven’t watched it yet, you need to fix that right now. You’ll be able to see some footage of the new content and listen to a special Feastivus poem read by none other than Sir Patrick Stewart himself. Even if you don’t play Plants vs. Zombies or celebrate Feastivus, it’s certainly worth a listen.

It’s certainly not a property anyone expected to branch out (get it, like a plant) in such a way, and while none of the later games have been runaway successes, they’ve still garnered support and acclaim for their little niche corner. Positive reviews for the games seem to focus on the pure joy brought on by the goofiness of it all.

As for Feastivus, what is it exactly? It certainly sounds like a riff on Seinfeld’s Festivus, but I think that hiring Captain Picard to narrate your trailer via poem certain gains you some instant credibility. Happy Feastivus, everybody.

Aug 8, 2022 Robert James 930
RPG with a cyberpunk theme The Ascent will soon have a substantial DLC called Cyber Heist that will give your army access to a brand-new cyberpunk...

Jul 31, 2022 Grace Simmons 870
Bite-sized celebrations of some of our favorite gaming memories are what make great PC gaming moments. Some mods take years to finish, making the...