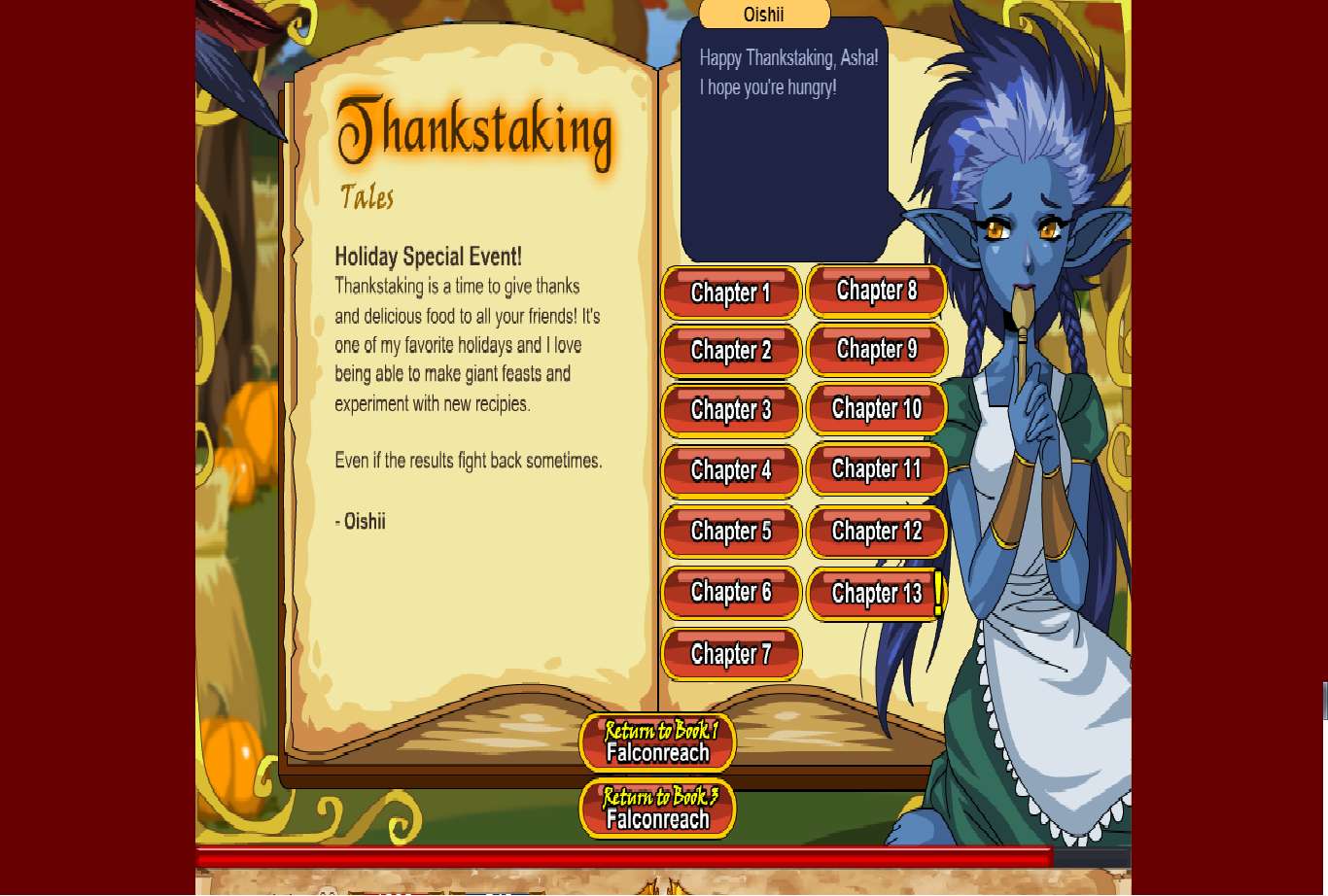 As a long-running free to play game by Artix Entertainment, Dragonfable always releases annual events for the player base. And toward the end of November, the Thanksgiving event, Thankstaking, comes out. Beginning in 2006 with Dr. Voltabolt’s mechanical monsters, players go through different events every year. Sometimes, the events are wars, where players come together and fight waves of enemies to unlock a boss. Other times, they write out a story for players to run through.

The Thankstaking event started out in 2006, where Dr. Voltabolt, a man trying to prove that science is better than magic in a world where magic is abundant who also happens to be a dentist, unleashed mechanical monsters, leading into a boss fight. This boss fight was mechanical turkey, with a secret button to face a harder version.

In the 2007 incarnation of the quest, Dr. Voltabolt unleashed full-scale war, forcing players to come together to unlock the boss fight,-304, a clockwork mini dragon. Defeating this boss unlocks a cutscene at the end where Dr. Voltabolt talks to the player.

In 2008, Dr. Voltabolt once again threatened Falconreach with his desire to show the superiority of science to magic in a world full of magic. This time, he brings out RawrGobble, a turkey dragon he created. Players can fight RawrGobble in either a regular fight, with friends, in the Extreme mode, or in full on Titan Mode where players engage battle with their personal dragon. However, the Titan Mode is only for DragonLords, players who subscribed to the game.

2009 brought out Zorbik, the Moglin Necromancer. Zorbik unleashed his undead army, while he managed to gain control of. This happened concurrently with Dr. Voltabolt’s annual invasion, with Zorbik finding Dr. Voltabolt before the Hero of Falconreach. The boss fight was a magical Turducken in both regular and Titan versions, which was used as a Thanksgiving dinner for the entire cast.

2010 brought out an attempt to take Thanksgiving back from Dr. Voltabolt’s annual invasion with Oshii, a magical blue elf. Unfortunately, Oishii’s Welcominggiving, her attempt to make Thankstaking into something more akin to Thanksgiving, resulted in another war, with another boss fight, the Titan fight, the Jellaton Mold.

The wars continue year after year, with Oishii’s attempts at making Welcominggiving into something good, with her cooking magic messing things up. As of today, Dragonfable is up to Thankstaking 2018, with the player-base waiting on the 2019 update. Fans of the annual Artix Entertainment events won’t want to miss out on the lastest incarnation.