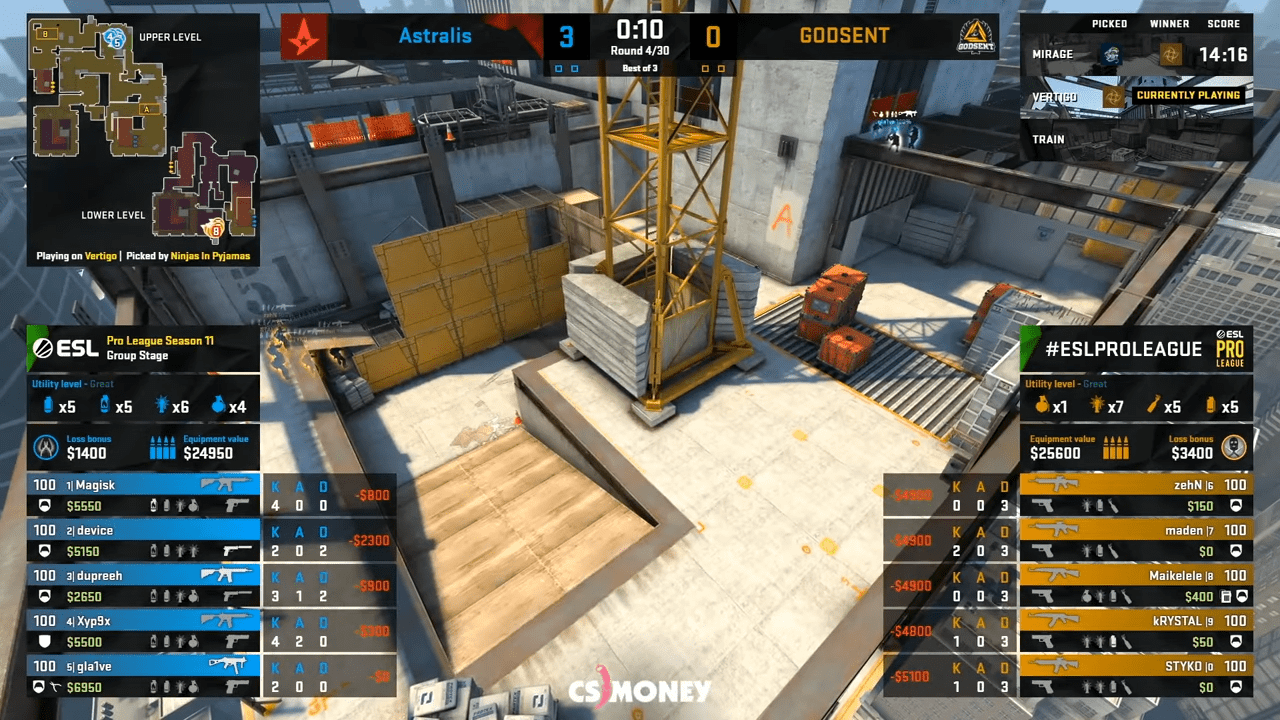 Yesterday two teams locked horns in Counter-Strike: Global Offensive‘s professional scene on ESL Pro League Season 11, and it resulted in one of the weirdest showings of professional CS: GO that has been seen in a while.  ENCE has failed to win 90% of the maps that they have played on recently, with no in-game leader helping call the shots and frankly distasteful incompetence shown in aiming duels and site retakes.  On the other side, you have Vitality; the French squad that is jokingly referred to as ‘Team ZywOo’ due to the weakness of the team as a whole tending to maneuver solely to offer the French AWPer ZywOo both intelligence and shots.

Team Vitality has noticeably suffered since they’ve dropped NBK in September of last year; one of two in-game leaders that the French team had.  The other in-game leader, ALEX, was dropped on March 4th.  So two teams went head to head without a discernable member of either roster being designated as the IGL.  Notably, Vitality signed a new member to replace ALEX named ‘misutaaa’, and this match would be the first tier-1 showing for the 17-year-old player.

If the government sees that, we're done… 😷😷

The selected maps to play from the pool were Mirage (ENCE), Inferno (Vitality), and Dust2 (Decider).

From out of the gate, it was a one-sided spree for Team Vitality on Mirage as they racked up a staggering 13 points in a row, while ENCE consistently showed poor T-sided communication and rotations from A to B bomb sites, being flummoxed by basic maneuvers and aim-duels stemming from the French.  The casters and fans alike were readily calling the match before the second half even began, which then somehow showed Vitality struggling to put together a solid T-side attack.  VItality managed to eke out the win after somehow stumbling mightily at (16-10) on round 26.

Vitality player ‘misutaaa’ clutched three different times on Mirage, continuing to pose a valiant threat to ENCE as the rounds progressed; 1v2’s were constantly handled with ease by the new French player, and he ended the first map with a +5 kill differential; third highest on the server.

The apparent race to the bottom had begun as both teams struggled to mount any considerable threat, round after round.

The second map was Inferno with Vitality beginning on T, which continued to be the bane of both teams as the rounds progress.  Vitality player ‘misutaaa’ became ever-more emboldened, however, stringing together multiple clutch performances that kept Vitality in the race far longer than they should have been, although Vitality succumbed inevitably at (8-16).  All five players from ENCE outscored all five players from Vitality, who struggled to perform unless they were on an eco-round.

This brought the comedy of errors to Dust2, the classic pinnacle map of Counter-Strike: Global Offensive.  Vitality was able to finally put together a mediocre T-sided offense that saw the first map close at (8-7), then continued their performance in the second half for a matching (8-7) that saw Vitality clutch the series in the decider (16-14).  New-comer ‘misutaaa’ had the worst round of the series on Dust2, with a frankly egregious differential of -4 and an average damage per round of 55.  His KAST (kill, assisted, survived, or traded) was 66.7%, with the only member on the server doing worse in that regard being ENCE’s sergej, who likely cost ENCE the round.

The match as a whole brought a few things to light, and they’re relatively interesting; first, ENCE has now lost 13 of the last 15 matches of the last three months, making them one of the worse teams in the upper echelons of CS: GO.  Secondly, ‘misutaaa’ seems like a player worth following.  Multiple eco-round clutches and point-deciding retakes placed him among the top fraggers in the server, despite a generally poor performance in Dust2.  Assuming he can get his bearing, and Vitality as a whole figure out their team composition, Vitality may very well be marking their point to turn-around their recent poor performances.

Jan 4, 2021 Chris Miller 17390
If you've ever fallen in love with another person, enamored by the way they move and laugh in public almost effortlessly, then watch them kick a...

Dec 15, 2020 Chris Miller 7460
What's a couple more cheaters in the game of Counter-Strike at this point? Following a bizarre Trusted Launch program that was immediately...

Dec 6, 2020 Chris Miller 6170
John McDonald is known for being a Valve developer that regularly offers his opinions in social media forums such as Twitter. As Valve seems to be...