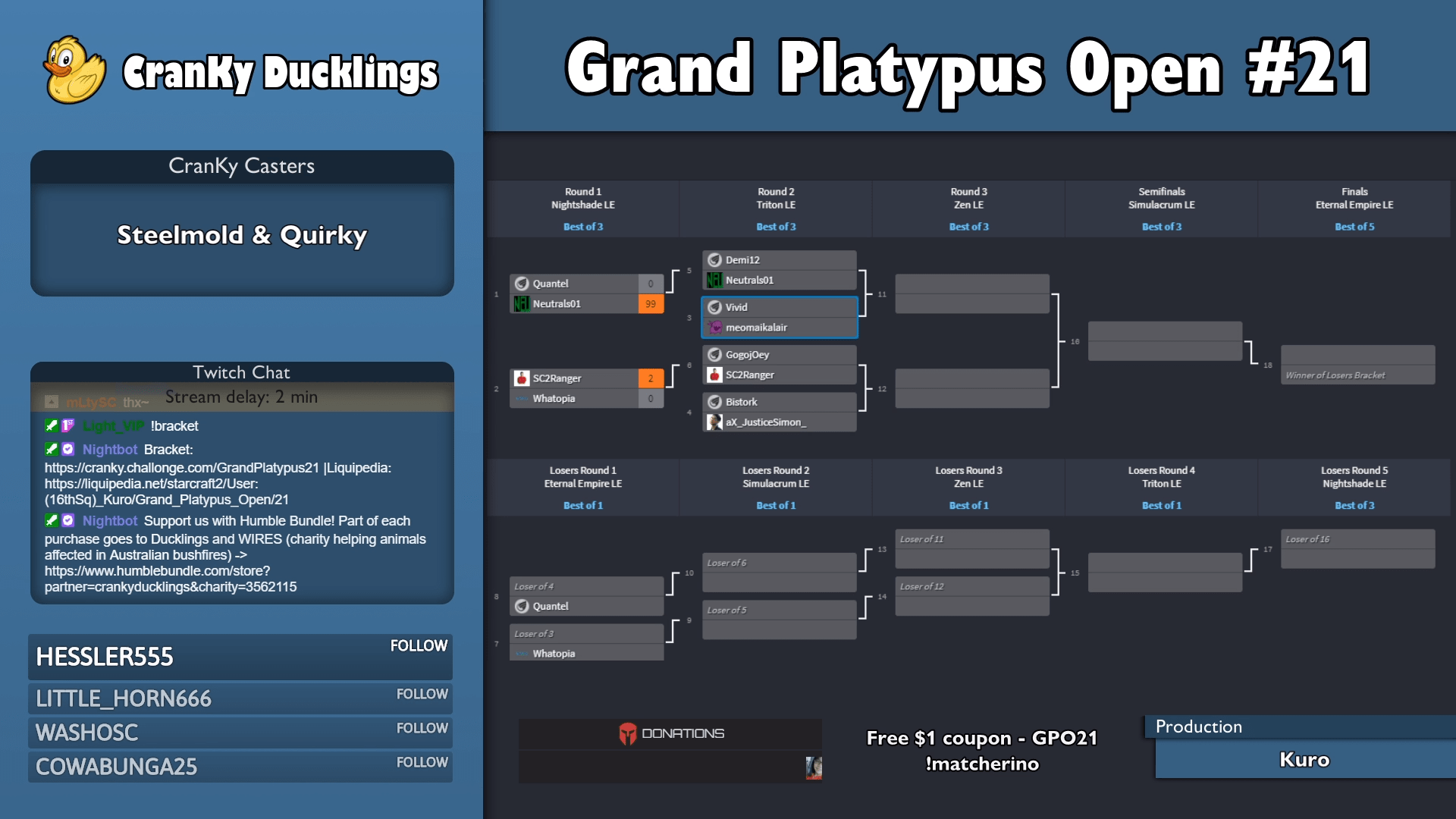 StarCraft’s tournament scene remains alive and well, but you don’t always have to pull in massive arenas full of viewers to watch. Sometimes a smaller tournament with only a handful of viewers is all you need for some fantastic entertainment and nail-biting plays. Bonus points if your commentating is done by a bunch of friends launching memes at each other to make it really feel like everyone is just crowded around television and having a good time.

We’ve covered quite a few Grand Platypus Open tournaments, with the SEA/OCE-region exclusive tournament returning every week. Players compete on best-of-three until the best-of-five finals, with twelve players competing to see who will reign supreme. If you’ve watched a few, you start seeing a couple familiar faces starting to appear, such as MeomaikA and Demi, who seem to be locked in competition for supremacy lately.

Winners receive a small monetary prize, bolstered by the Matcherino contributions that the viewers bring. The top four players take a chunk of OSC points as well to increase their official ranking.

You can support our tournament through @matcherino_ – using code "GPO21" https://t.co/bLRHHcFsKc

🦆 Catch it live at https://t.co/1k4DzjSRcppic.twitter.com/DKJm2FHeUF

RELATED: Bethesda Showed Off The New Wastelander Update As A Thanksgiving Gift To Fans, Developers Hope To Move Past The Fallout 1st Debacle With New Content

We have a bracket of this time around, with the following players coming to test their abilities against each other:

As the roster highlights, we have a Zerg/Protoss heavy roster, with six Zerg and four Protoss. We don’t have any Terran players, so it’ll be interesting to see how the tournament plays out with a Zerg/Protoss exclusivity. If anything, we’ll certainly have a good number of mirror matchups.

There’s a good chance we’re in for some aggression-heavy plays, especially in the Zerg-Zerg mirrors. Demi and MeomaikA especially are known for their aggressive play, while players like Bistork will often favor a more defensive-minded and mech-heavy approach.

Demi’s return from hiatus has brought another level of professional competition back to the tournament. Constantly vying with his fellow Zerg mains, Demi remains a chat favorite to come and bring the tournament back home for the week.

StarCraft – and esports in general – have had a bit of a setback to their schedules in the wake of the COVID-19, which has canceled or otherwise interrupted a high number of esports events. We’ve seen Hearthstone tournaments, League of Legends seasons, and entire tech conferences be taken down or rescheduled due to the virus. Thankfully, we always have online tournaments like the Grand Platypus Open to fill in the open spaces.