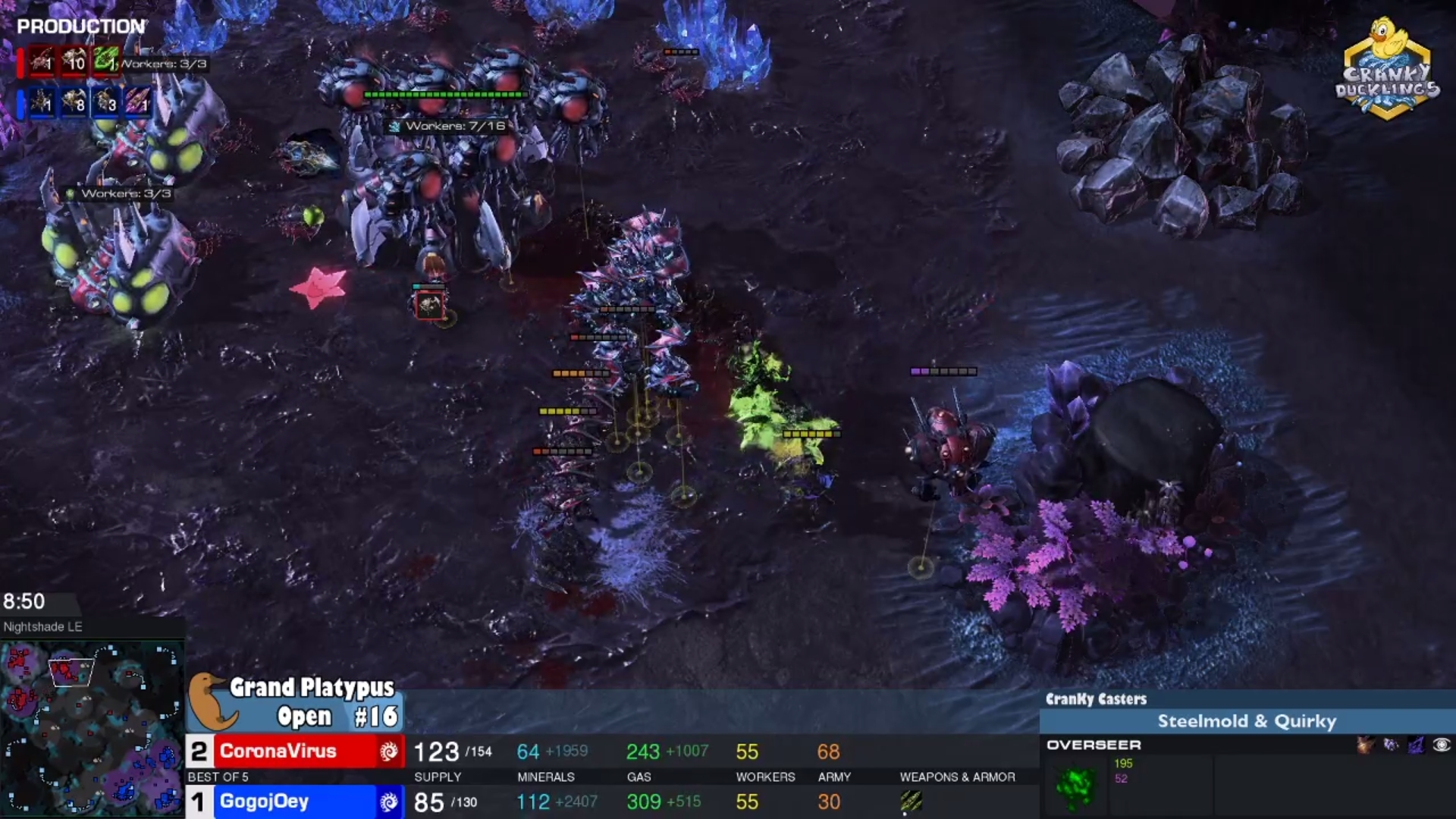 Cranky Duckling’s Grand Platypus Open tournament has come to an end after a vigorous Zerg-heavy bracket of matchups. The final was decided in a tense matchup between Zerg mains GogojOey and Meomaikalair(playing under the name CoronaVirus), both with similarly aggressive playstyles. Once Bistork was knocked out of the tournament, there was room for a new champion to be crowned. Meomaikalair stepped up to the task and claimed the crown as the new champion of the Grand Platypus Open, the first of 2020!

GogojOey was defeated handily in the first two matches by the extremely aggressive playstyle that Meomaikalair brings to the field. After two losses, however, GogojOey managed to recover and win the third game. When Meomaikalair began his aggression again in the fourth game, GogojOey was ready and did resoundingly better in keeping the early aggression at bay. Both players transferred into roach-heavy armies, with Meomaikalair keeping a healthy number of mutalisks on deck.

The competition was fierce, but dominated by a handful of players. An interesting statistic from looking at the bracket is that, with the exception of the final matchup between GogojOey and Meomaikalair, every winner in the tournament won their series in a sweep. Anyone who moved onto the next matchup won their series 2-0, and it wasn’t until GogojOey managed to take the third game in the final series that this statistic was broken.

Confirm your participation by clicking the "Check in" button on @Challonge page.

This tournament had a Zerg-heavy lineup, with six of the twelve competitors being Zerg players. Because of this, we saw a good number of Zerg-vs-Zerg matchups, including the final match itself. In fact, there wasn’t a single game in this tournament that didn’t have a Zerg player in the matchup! Still, there was plenty of room to mix things up, such as two Semi-Final matches that included a Zerg-Terran and a Zerg-Protoss matchup. That said, we may have seen a record number of zerglings for a Grand Platypus Open tournament.

StarCraft esports continue to blossom, and a huge reason for that goes into smaller, more independent organizations like Cranky Ducklings and the tournaments that they organize. Grand Platypus Open is one of the many events that they regularly bring to the table, so make sure to tune in and support them if you want to keep the indie esports scene alive!

Don’t forget, Cranky Duckling’s Grand Platypus Open is exactly that – open! Anyone can sign up for the tournaments. The seventeenth tournament will be here soon, so if you’d like to take on the regular competitors (and if you’re in the region to qualify for the tournament) then give it a shot! You never know how well you’ll do until you try!