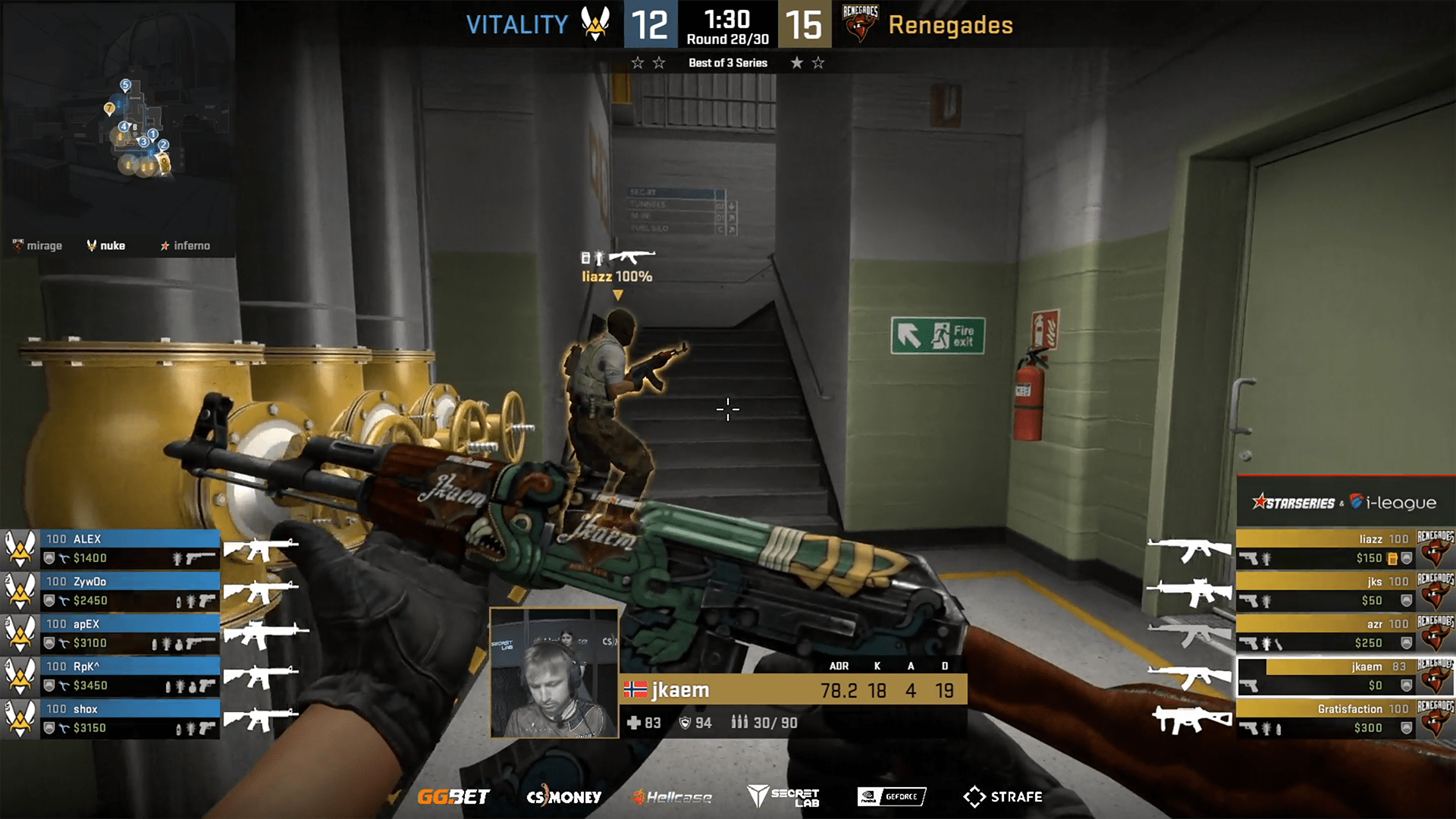 The second day of the Counter-Strike: Global Offensive StarSeries i-League Season 8 Finals has officially ended, with far closer matches overall than was experienced overall in day 1.  Today cemented which teams would go to the Finals today, competing for the $500,000 prize pool.  The series today consisted of fnatic versus Evil Geniuses in contestation for the finals; the loser has to beat the lower bracket victors, and the winner cements their place in the grand finals.  In the lower bracket, FURIA, G2, MIBR, and Renegades battle it out in an elimination best of three series, vying to regain a spot to content the grand finals.

Series One – FURIA versus G2

The initial series went underway at 3:00 AM EST, but both teams were wide-awake in Belek, Turkey for the elimination match.  From FURIA, ‘HEN1’ and ‘yuurih’ were clear team leaders with kill differentials, while G2 ‘huNter’ and ‘AmaNEk’ held their own with decent differentials, yet big defensive clutches.  With FURIA coming off of a win against Vitality, they clearly were motivated by the easy win against the prior French powerhouse.  G2 has done well enough recently as well, with a close loss to fnatic knocking them into the lower bracket, and a clean sweep against NiP.

G2 had first map pick and selected Vertigo; the newly minted competitive map pool entry bade well for both sides, with a first-half (7-8) with FURIA on the counter-terrorist side.  The second-half found FURIA holding a strong terrorist side, giving them point advantage as the map closed at a close (16-14).  FURIA’s map pick was Mirage, and was found to be just as closely contested.  FURIA held a strong counter-terrorist side, showing a (9-6) scoreboard after the first fifteen.  G2 picked up the pace in the second half, picking up 8 points before finally succumbing at another (16-14).

G2 was eliminated from the lower-bracket, and thus the tournament, while FURIA had a momentary respite before they would have to defend their chance again.

These matches really get the blood pumping. 😤 We have defeated @mibr – GGWP.

The second series had high expectations for being yet another closely fought match, due primarily to the clean Counter-Strike that was just played by both final hopefuls FURIA versus G2.  MIBR versus Renegades was a lower-bracket elimination match; a loss here would spell the end of the seasons run for the team within StarSeries i-League.  The series was consistently in limbo, with each map being a one-sided stomp that started at the initial pistol round and gave momentum to the map-favored team for the entirety of the map.

Renegades had first map pick and opted for Inferno, which was surprising as they held roughly a 50% win rate on the map.  They began with a strong terrorist side, pulling 12 points in the first fifteen (3-12), on the back of Renegades ‘AZR’ 1v2 clutch on a post-bomb-plant pistol round.  Renegades cleaned the second half after giving an additional 4 points, resulting in (6-16).  Not to be outdone, MIBR picked their favored map of Train, and held an absolute clinic on aggression and map spacing, closing the map (16-5).  Mirage was left after the picks and bans, and competition simply wasn’t to be seen, as Renegades pulled a clean (5-16).

MIBR was eliminated from the match, and Renegades were slotted to fight FURIA to see how would play the loser of the next match.

Easily the series of the day, this match held some of the most flawless Counter-Strike I’ve seen in years.  If you missed it, it is strongly recommended that you go and watch the series in its entirety before reading further, if for nothing else to experience raw Counter-Strike skill.  Two of the heaviest rosters met in this Sweden versus United States battle, with stars such as fnatic’s ‘flusha’, ‘JW’, and ‘KRIMZ’ representing the blue and yellow fnatic, versus the ever-rising stars of EG ‘stanislaw’, ‘CeRq’, ‘tarik’, and ‘Brehze’.  Evil Geniuses were given odds in the bets, favored at an average 1.6 versus fnatic’s average of 2.14.

fnatic had the honor of first map pick and opted for Mirage, which they promptly cleaned in a (16-2).  EG were on their heels the entire time, clearly at a loss in how to turn around a map that fnatic looked unstoppably comfortable on.  Evil Geniuses picked the classically duel-centric map Dust2, which is where the game began to pick up steam.  fnatic’s ‘JW’ had an impeccable showing every challenge on this map, pulling wild shots while standing in Molotov’s to ever-tilt the favor to fnatic.  The first fifteen rounds closed with fnatic holding a commanding lead (9-6) based on an impressive T-side showing.  Evil Geniuses switched to T-side for the second half and began lecturing fnatic in-game on how to dominate, winning 10 rounds while only conceding one round.  The map finished (10-16).  The final map left was Inferno, and EG’s ‘CeRq’ happily threw the team onto his shoulders to carry them through two clutch rounds, ending in EG pulling a victory with a final score in Inferno of (13-16).

Evil Geniuses clutched the finals slot on Sunday, and fnatic’s loss makes them play the lower bracket winners for another chance to defeat EG.

The day closed with both bottom-bracket winners facing each other to see who would have the privilege of playing for the prize pool on Sunday.  FURIA came off of a win earlier in the day against G2, and had roughly six hours to rest between matches.  Renegades won against MIBR, and had roughly three hours of rest.  While on paper this match seemed to be a solid match-up between two welterweight Counter-Strike matches, Renegades simply failed to appear as they were expected to, and chalked it up in the post-match interview as ‘jet lag’, to the confusion and merriment of the casters.

FURIA selected Nuke, and almost closed the match in the first fifteen, with a (10-5) at the half with FURIA on CT.  They closed the match shortly after, with a resulting scoreline of (16-9).  Renegades picked Mirage; Mirage was their preferred map pick, as they held more wins on that map than all others so that FURIA didn’t ban it immediately was suspect.  The Renegades had a much better appearance in this match, starting T-side with a resulting (8-7) within the first fifteen.  After the half, Renegades simply couldn’t find their footing on CT, and lost (16-11).

Renegades were eliminated from the finals, and FURIA looks to challenge fnatic on Sunday for a chance at taking on the current reigning champions, Evil Geniuses. Whoever wins between FURIA and fnatic is at a disadvantage, simply because they would be playing for almost three hours straight by the time the finals begin.  This should be an easy enough showing from Evil Geniuses.