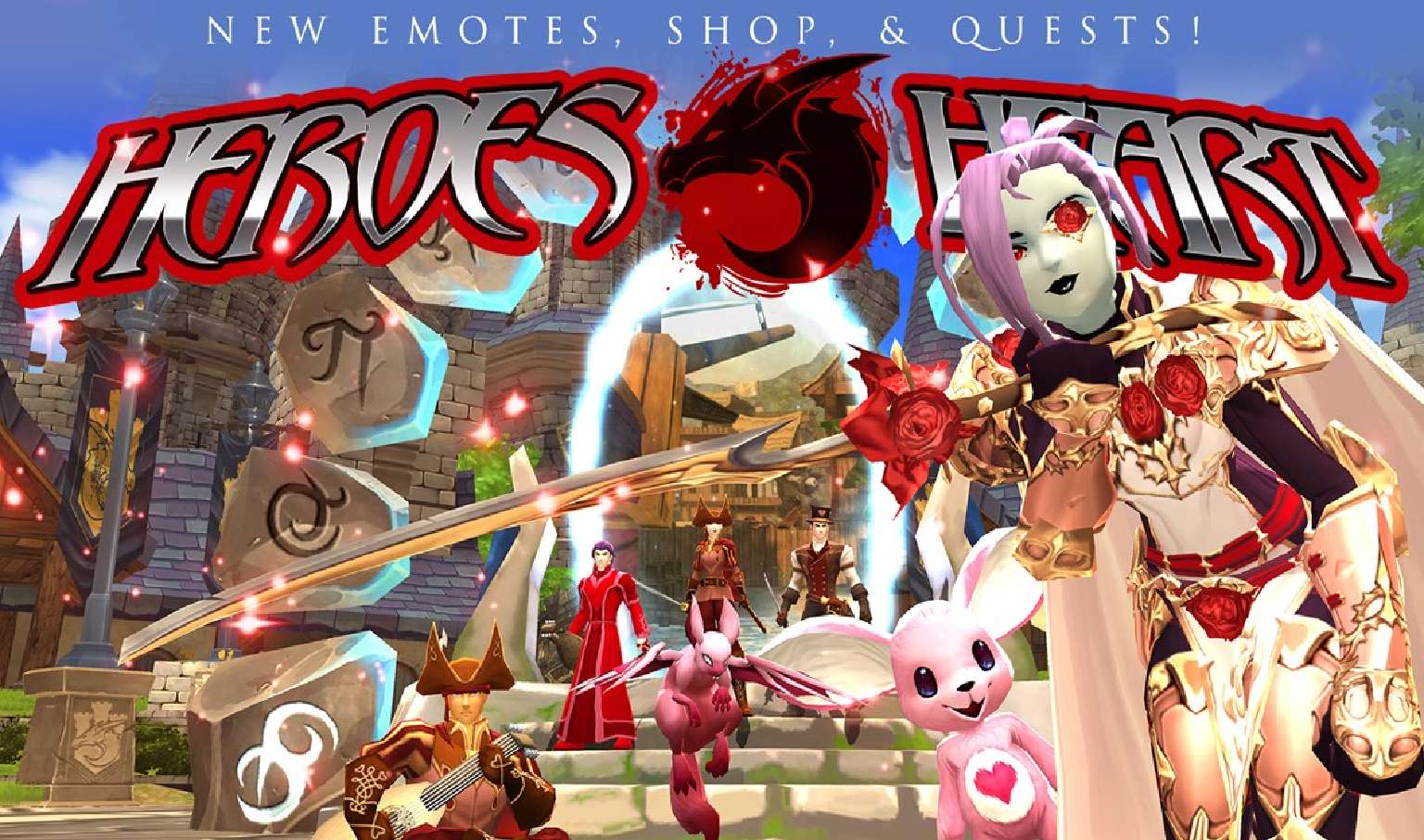 With February 14th nearly upon us, it’s time for Hero’s Heart Day to begin for Artix Entertainment. And with AdventureQuest 3D being the newest game in the Artix family, the team has more freedom to add new things to the game compared to the others.

Hero’s Heart Day is a time for players to celebrate their love of adventure. During this Valentine’s Day-themed event, players will get access to new emotes, items & quests. To get started, players will go to BattleOn and talk to the snazzy-looking fellow with the lute on the bridge named Maurice.

The team has come up with two new emotes; blow a kiss and two new emotes for sitting. The “blow a kiss” emote, while cute, the team knows this is going to be used as an evil taunt.

The sitting emotes will be more straightforward. Players will be able to sit cross-legged or upon their knees like an expert swordsman, with their weapon at the ready.

The new NPC is Maurice the Minstrel. According to the team, he has come to BattleOn to inspire the heart of every hero. Talking to him on the bridge will get the new daily quests and the 2020 Heroes Heart collection, which include a new effect potion, pets, and a travel form.

But as this game is a free to play MMO, the biggest part of the update is the armor and weapons, both for in-game currency and for their real money currency. And for this year, AdventureQuest 3D artists Darkon, Winnie, and Dage broke out the pink and red to design this new Collection.

Lastly, Dage made the weapons for the event. Dage brought the players the Lute for Lovers, the Heartfelt Cane, and the Heartbroken Cane.

Also included in the collection are the cutest cuddly-looking Cuddly Moglin, in both pet and travel forms, and the Beloved Vampragon pet in heartwarming pink tones.

As with all events, players can get involved in the daily quests in addition to the story for this year. The “Spread the Love” daily quests will take players all around one of the districts of BattleOn to meet some very special NPCs. Players will earn 10 Lovely Hearts per quest which can be used to purchase any one of the 4 colors of robes and boots.

The team would also like to remind us that next week begins the Breaking Benjamin Battle Concert.

So whether you’re a fan of Valentine’s Day or not, Artix Entertainment always gives you something to do. So show your love for adventure and BattleOn!

Postal 4: No Regerts Brings Yet Another Update With A Ton Of New Expletive-Laden Content