A Free Story DLC Has Been Released For Cadence Of Hyrule, Octavo’s Ode Is Aviliable Now As A Free Sotware Update

The amazing fusion of The Legend of Zelda series and Crypt of the Necrodancer, Cadence of Hyrule, has a holiday surprise for fans. A new update was released, and it is adding OCtavo’s Ode storyline to the game. Anyone who owns a copy can acquire this update for free by simply updating the software. This is a great chance for all owners of the game to discover more about the villain and learn a new way to play this rhythm-based game.

Crypt of the Necrodancer brought a new type of RPG experience into the world. By mixing rhythm with the game’s core controls, it forces players to feel the beat and literally jam their way through the game. The Cadence of Hyrule embraces this musical style and brings players their favorite Legend of Zelda characters in a new groovy battle experience.

The update will allow fans to discover Octavo’s true intentions and push players to understand the villain’s takeover of the land further. To experience the new content, fans must have completed the main campaign. Once this is done, Octavo becomes a playable character in his own story, letting you further understand this deep character.

The game still keeps the initial theme harnessing the power of dance to defeat all of your foes. There are other minor updates, but the core concept stays consist within this DLC. This free holiday surprise is already the talk of many online communities as they seek to dance their way through all of this bopping bonus content.

A new campaign is not all that has come to the game. A new “Dungeon Mode” is also being added to the game. It is a challenge for those who have completed the main quest and want something new. This new mode retains the controls of Crypt of the Necrodancer but mixes it with the foes found within The Legend of Zelda universe.

There are sure to be many other minor changes made to the game in this DLC expansion. Fans are expecting balance adjustments and maybe some minor bug fixes to be slipped into the update.

The one aspect of this DLC that has fans more excited is a very small change. Now you can pet the dog in Cadence of Hyrule. Fans of the game have flocked to give their appreciation of the digital pooch and assure the dog that it is, in fact, a good dog.

Dec 18, 2019 Joshua Goodpastor 5220
The amazing fusion of The Legend of Zelda series and Crypt of the Necrodancer, Cadence of Hyrule, has a holiday surprise for fans. A new update was... 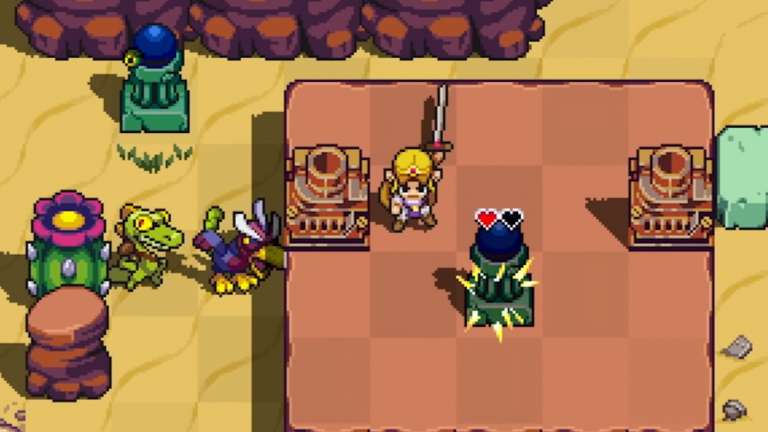 Aug 8, 2019 Edmund Dorsey 4580
The Cadence of Hyrule is getting an update from Nintendo to fix some bugs and add some new elements. There’s a new leaderboard category for each...

Jun 14, 2019 Harry Alston 7080
Cadence of Hyrule: Crypt of the Necrodancer is now available to purchase on the Nintendo shop. The new game from Brace Yourself Games combines their...