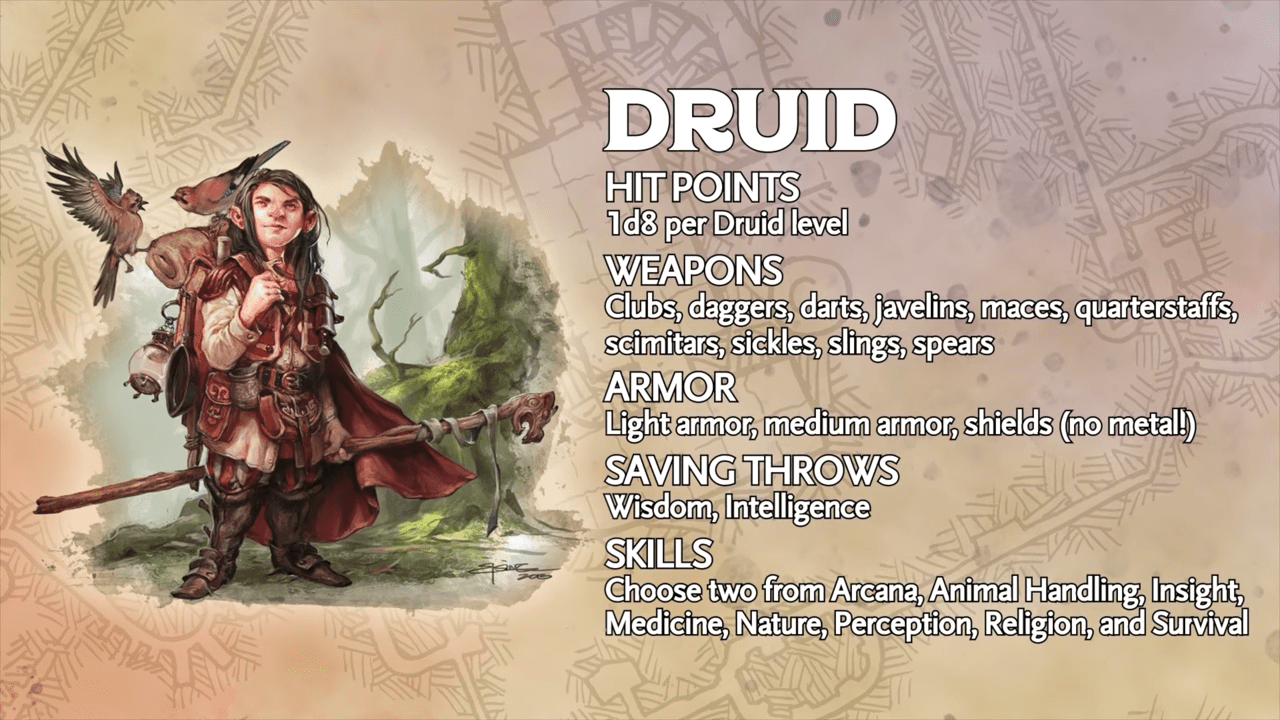 The Druid has always been known in the Dungeons and Dragons community as the hippie. Druids can sometimes fall into the nature-loving vegan category and it’s honestly a trope that the class encourages.

However, the newest Druid subclass seeks to widen the Druid’s horizons and look to the stars for answers and inspiration. Druids of the Circle of the Stars have sought hidden knowledge amongst the constellations for eons, even going so far as to build monoliths meant to stand cataclysm and the tests of time to house their knowledge.

Druids of the Circle of Stars use astronomy and astrology in equal parts to determine knowledge and discern omens. At 2nd level, the Druid gains the Star Map feature. The Star Map is used to map constellations, but can also be used as a spellcasting focus. It also gives the player the ability to cast the augury and guiding bolt spells a number of times equal to its Wisdom modifier per long rest.

2nd level also sees the addition of the Starry Form feature. Starry Form can be used instead of your Wild Shape feature to assume a…starry form. Your body takes on a luminous, starlike quality; your joints glimmer like stars and glowing lines connect them as on a star chart.

Your body will shed bright light in a 10-foot radius, and dim light for another 10 feet beyond that. Furthermore, whenever you assume this Starry Form you’ll be able to choose from between 3 different constellations to appear on your body: the Chalice, Archer, or Dragon.

Chalice gives you extra healing when you heal other creatures, Archer gives you a bonus action ranged attack, and Dragon gives you the ability to make all Constitution checks to maintain concentration on spells at least a 10.

At 6th level, the Circle of Stars Druid gains the Cosmic Omen feature. Cosmic Omen allows the player to consult their Star Map after finishing a long rest. A d6 will determine whether your results will be Weal (even number rolled) or Woe (odd number). Weal allows you to add a d6 to a creature’s attack roll, saving throw, or ability check as a reaction a number of times equal to your Wisdom Modifier. Woe allows you to subtract it.

The 10th level feature is a short one, but very important. Full of Stars gives the player resistance to bludgeoning, slashing, and piercing damage when in Starry Form. This is going to allow the druid to become much tankier when in Starry Form and gives an extra reason to use this feature over Wild Shape.

Finally, the 14th level feature is called Star Flare. Star Flare allows you to teleport any willing creature in a 30ft sphere to a spot of your choice up to 120 feet away. Creatures teleported this way do take 4d10 radiant damage on a failed Constitution saving throw, but it’s useful as a Get Out Of Jail Free card if needed.

If you want to know more about this subclass or would like to view others, it’s recommended to visit the Unearthed Arcana website for more information.

Jun 16, 2021 Harry Alston 12670
Wildermyth is out of early access and receives a final splash of polish. The game crisscrosses genres, fusing Xcom-like tactical gameplay with...

Dec 27, 2020 Seb Bates 16940
Tasha's Cauldron of Everything is well into its global release, and DnD adventures across the world have been dying to take a peek at the contents....