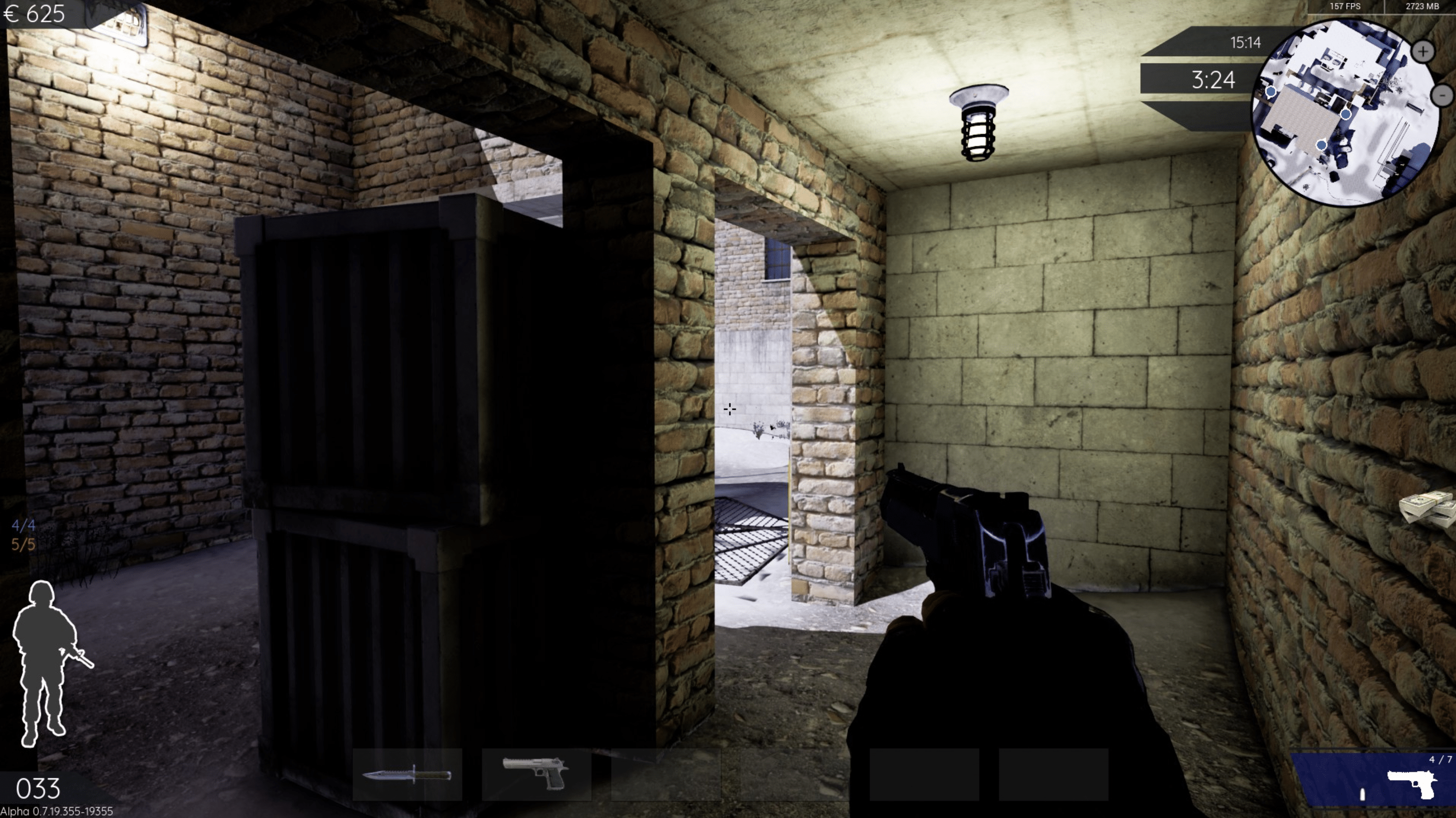 Sometimes games appear where none were expected, filling voids left that no one noticed, in an offering that no one requested.  It’s a bit harsh of an opening statement when discussing a game that is still noticeably in Alpha state, yet TO4: Tactical Operations frankly isn’t bringing much to the table in comparison to other indie development studios pouring passion into their projects.  That Alpha state hopefully is rearing its head more than it typically does, as the game is currently most akin to a Counter-Strike knock-off, for better or worse.

The game is played in rounds; in deathmatch, the rounds last for a few minutes until everyone is unceremoniously yoinked back to a new spawn location for the next set of ~5 minutes.  The spawns occur everywhere on the map, and gaining intelligence is brutally difficult; it’s next to impossible to deduce who your teammates are, or the control you currently hold over the map.

Whereas Counter-Strike knows that it’s a game of gaining intelligence first and foremost, and the professional scene showing that in spades, it appears as though the developers skimmed over that aspect of gameplay is lieu of…well, whatever they put in.

Many of the weapons found in Counter-Strike: Global Offensive also show their head in TO4: Tactical Operations, although occasionally under different names.  Yet they still act much like their CSGO counterparts; the AWP is the defacto one-hitter-quitter, various rifles for spamming chokepoints, and pistols that last for far too long.  You gain cash to spend on weaponry by completing objectives or fragging enemies (much like CS), although you can immediately spend that money.

Pressing B anywhere, at any time, brings up a decidedly goofy buy screen that takes a while to figure out with scrolling, left and right mouse clicks, and giving your gear back to the store when you’ve decided that it just isn’t doing what it needs to.  A bizarre idea, offering bloodied weapons back to the retailer after they’ve let you down a couple of times, but it’s at least a unique one.

TO4: Tactical Operations also features a Capture the Flag game mode, bringing the party-based FPS games back to their roots of old fashioned fun, versus high-stakes competition.  The gameplay is outlandishly fast; anyone who ever wishes Counter-Strike: Global Offensive was a faster-paced game ought to give TO4 a run; it’s laughably impossible to hold an angle with the speed of play.

Don’t let what TO4 currently looks like deter you from giving it a whirl, however; there is absolutely something in the mire, hidden deep beneath the CSGO knock-off veneer that could very much come to light.  If development studio TacByte can defer from trying to follow paths that have already been blazed by others, and figure out the core of what they’re attempting to offer, TO4: Tactical Operations could hold something more in the next year or two.

At least this Alpha iteration is free to try.