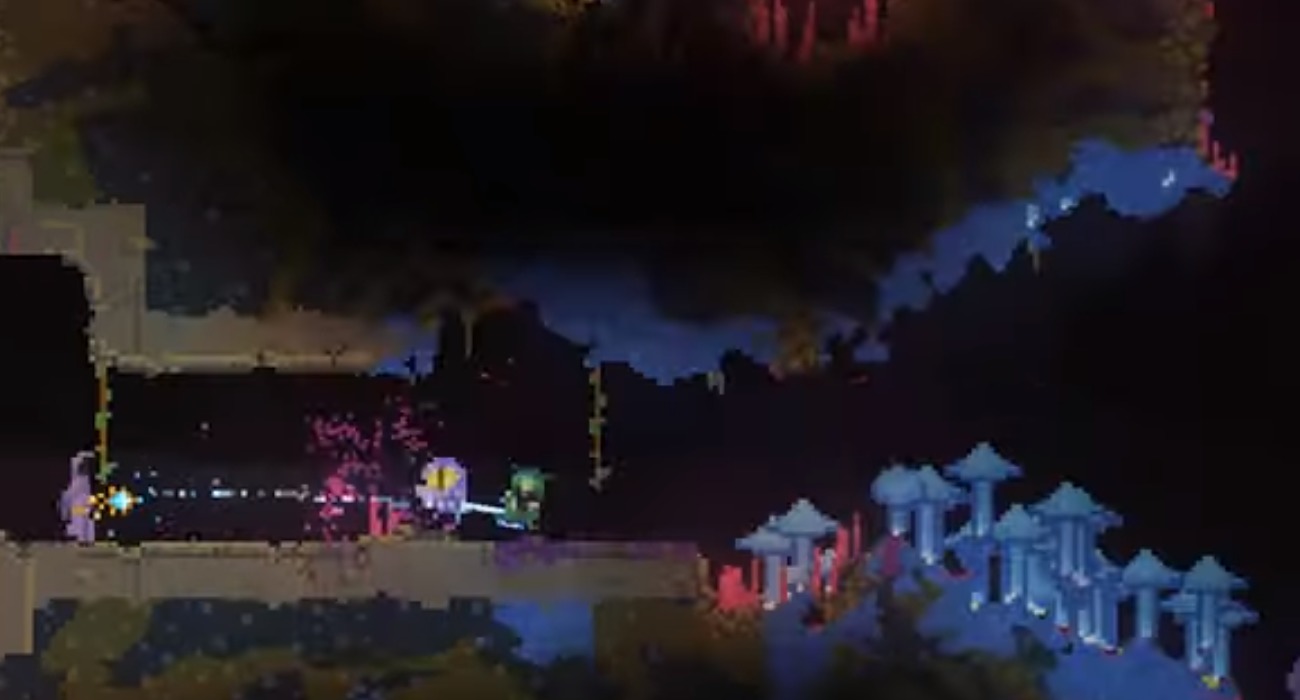 If you like pixels and action roguelite games, then you’re going to love Noita. This game features pixels where everything is physically simulated. It’s a unique design that not a lot of games of this genre have.

It was revealed that this game is set to hit Steam’s Early Access program near the end of September. To celebrate this announcement, a new trailer was just released on the Nolla Games YouTube channel. It’s particularly unique and captivating.

The trailer shows a purple-robed wizard navigating around dungeon-like stages. To get past various sections, he must blast through different layers. Seeing the pixels at play is a striking visual that seems majestic. It’s like the stage falls before you as you delve deeper in the mysterious of this secrete world.

It seems like your character will have all sorts of weapons and items to use to get through each stage and defeat enemies. At one point, the character enters a water environment and shoots a bolt of electricity that shocks all of the nearby enemies.

The character also is shown using fire to blaze up structures, creating the perfect walkway to the next area. Noita’s diverse levels are so visually stunning to look at as well. The developers at Nolla Games have done a beautiful job at giving the game its own unique flair.

It seems like they’re giving you plenty of ways to get through this procedurally generated world. Fire, ice, and magic spells are all available and they’ll come in handy for different situations. Pretty much anything in this game is destructible, too. Gamers always love this type of design. It’s like an open sandbox where there are no rules to abide by. If you can touch it, you can destroy it.

It’s not often that a dungeon-crawler has this amount of distinct artwork and fun mechanics. Noita isn’t even out yet, and already, it’s shaping up to be a pretty fantastic title.  You’ll have so much freedom from start to finish.

The very act of messing around with your tools looks fun. At first, you’re not sure what everything does. As you slowly progress, though, you’ll catch on and know just what magic spell to cast.

Just be careful, though. The environments you destroy can bring forth harmful elements that you don’t want getting on your purple-colored wizard. Strategy, timing, and understanding will be key in your successful progression.

In A Disappointing Move, Sony Will Not Host A PlayStation Press Conference At This Year's Tokyo Game Show

Aug 7, 2020 Chris Miller 16323
Some hate them, others love them; they're a polarizing aspect of modern game development in the PC scene, and they have either reached for the stars...