There’s nothing like an adventure, is there? The thrill of discovery, the rush of battle, the simple joy of good food. Stranded Sails – Explorers of the Cursed Islands brings all that and more in a colorful, vibrant, and deeply immersive exploration game where you wind up stranded on a series of mysterious islands, and have to make your way through.

Gather, farm, collect, craft, and forge relationships with your crewmates to unlock more of the islands, discover its secrets, and maybe find a way back.

🔥RELEASE DATE ANNOUNCEMENT!🔥
Set your sails! After being on high seas we will finally reach our destination when we release #StrandedSails digitally on October 17th. 2019 for #PC #NintendoSwitch #PS4 and #XboxOne!

I was fortunate enough to get in touch with rokaplays, partner of Lemonbomb Entertainment, developers of Stranded Sails – Explorers of the Cursed Islands. They were all too happy to reply to some questions that will hopefully provide greater insight to their upcoming game. All answers are left as they were sent from rokaplays.

1. What inspired you to make this game?
Our partner rokaplay approached us with the core idea for the game: Farming, stranded on a tropical island. There is a big fanbase for the farming game genre that became very popular with the Harvest Moon series. We developed this idea further and threw explorations and quests into the mix. It was a natural fit. We wanted to create the most diverse gaming experience possible, both exciting and relaxing. This is exactly what Stranded Sails – Explorers of the Cursed Islands is about: An open world farming adventure in an appealing maritime setting.

2. You mention this game takes place in a Caribbean locale; what made you choose that particular geographic zone?
We wanted to create a world that was beautiful, exotic and mysterious. Since the protagonist is shipwrecked, it was clear that only a Caribbean-inspired group of islands could be considered as a setting. Each island differs from the other, has its own charm and hides its own surprises. The players forge deep into the wilderness and quickly realize that the islands are not as lonely and uninhabited as they were meant to be.

3. Stranded Sails is said to have a ‘linear path with a goal always in mind.’ Will players be able to go wherever they want whenever, in spite of that?
It is important to us to tell a heartwarming story that follows a linear quest line to a final end, so that the players always have a purpose and a clear goal in mind. To progress in the game, it is important to follow the story-driven quests. As soon as you gain access to the rowboat the world really opens up and gives you the freedom to explore the world on your own. You are able to unlock more areas or get to important items for better foods. It is essential to be equipped with enough food on your adventures to control your energy levels. Energy is the core resource that defines for how long you can venture out into the wilds before having to return to your camp. The better the dishes you carry, the longer you will be able to travel outside of your camp. The players are able to decide to a certain extent whether they prefer to slow down and chill out while farming or embark on an adventure. There are many things to see and find while you explore the Cursed Islands. Discover new seeds, crafting components or hidden artifacts and treasures to expand your farm and camp, learn more about the history of the mysterious archipelago or just collect all there is to find.
Progression is not measured by some number or a skill tree, but emerges organically from the things you find and do.

4. As an indie studio, you have some great competition, especially in regards to the genre of game that Stranded Sails is. Are there any aspects of your game that you feel outshine other such games that can really set it apart?
Stranded Sails stands out from other farming games by telling a heartwarming and linear story in an open world. While most farming games are set in a more realistic and modern setting Stranded Sails takes place in a time where the industrialisation just began. In addition, it includes fantasy elements and is plays out in tropical wilderness far from civilisation.

5. You showed a great deal in the trailer! Without ‘giving away the farm’, what else do you have in mind for the game when it launches proper?
Once the game is released, we are very excited about how players will react to it and how they will rate it. Here we will listen carefully to our community and all other players. We ask everyone to give us their honest feedback, which we take very seriously. Only if we know what players like and don’t like about the game can we constructively include it in the planning of the next steps and future projects. Then we’ll see what the upcoming milestones will look like. As soon as we know more, we’ll share it with all of you.

7. While you bill the game as being single-player, are there any plans for a multiplayer expansion?
Stranded Sails is a pure single player experience, with no cooperative or multiplayer aspects.

8. The crew is shown to be an important part of the game. Other life simulation/adventure games have given you the opportunity to pursue relationships with NPCs. Will such a feature appear in Stranded Sails?
No, there’s no romance or marriage in the game. The main focus of our survival adventure is on the story and the final goal, not on the relationships between the characters / NPCs. The members of your crew will provide you with quests that guide you through the world. You have to make sure that your crew is happy and well-fed so that they will support you. The crew members will give you access to tools that you can use to do new things. Lumberjack Logan for example will give you his axe once you find him, which you can then use to remove thorn bushes and progress further in the world.

9. Cosmetics are becoming more and more sought-after in games. What sort of goodies can we hope to see in the game?
You are shipwrecked on a remote group of islands and all you wear on your body is all you have. But as a sort of goody there are different hats you can wear. You get the hats as a reward for various quests.

10. Finally, you mentioned at the end of the game you can choose to finish it, or continue? What does this effectively mean? Will there be replay value or can the game continue in one long, endless adventure indefinitely?
At the end of the game you can decide whether you want to leave the Cursed Islands or stay. If you choose to leave, the game will eventually end but it won’t save any progress so you can always come back to continue exploring and farming. Rokaplays can certainly be added to the growing list of studios who seek greater interaction with their fanbase, given how keen they are for player feedback. A lot of love, and a lot of heart has gone into this IP, and players will be able to see what the world of Stranded Sails has to offer come October 17, 2019, on Nintendo Switch, Steam, PlayStation 4, and Xbox One.

Until next time, stay and play savvy, gamers! Oct 15, 2019 Shayne Brown 12180
There’s nothing like an adventure, is there? The thrill of discovery, the rush of battle, the simple joy of good food. Stranded Sails - Explorers... 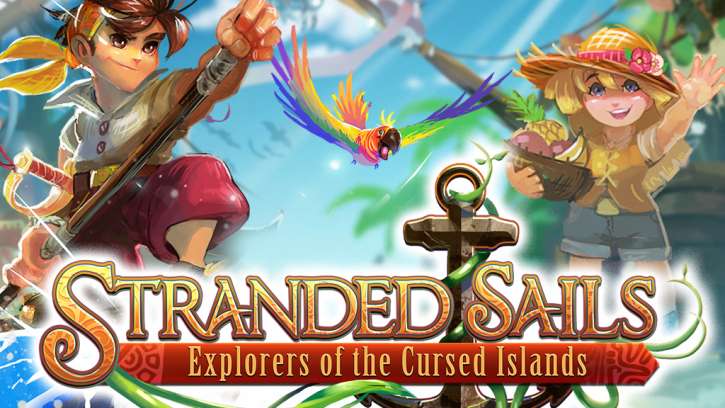 Jul 11, 2019 Joshua Goodpastor 6150
Lemonbomb Entertainment brings an open-world farming adventure game that takes place on islands scattered around a massive ocean. You and your...