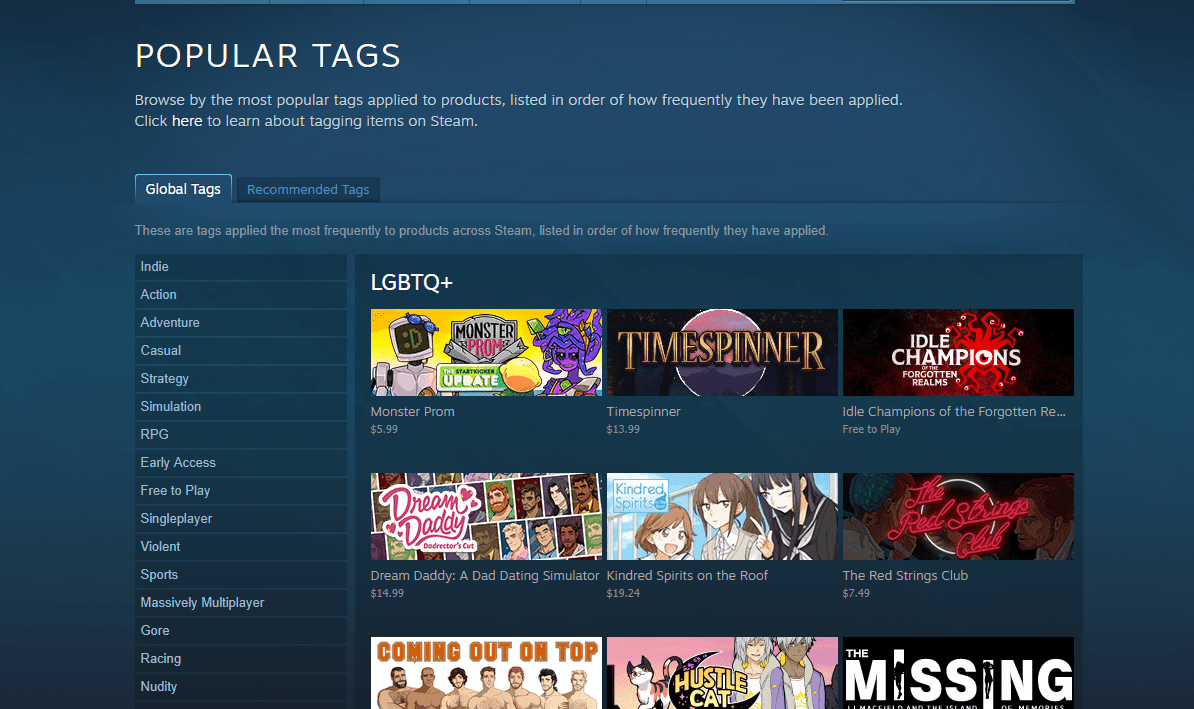 The month of June is known as Pride month – a time when the LGBTQ+ community is celebrated around the world.

This year during Pride month, a lot of big things have happened intertwining the gaming world with LGBTQ+ content. Many companies have shown their support with rainbow-colored emblems and pride-themed additions to games, and now Steam has permanently joined the club.

Steam, one of the biggest platforms that distribute games for PC and mobile users, just added an LGBTQ+ tag to their tag list.

Tags are applied to games to help users discover specific games based on their genre and can be added by developers as well as players.

According to Steam, “Tags that are applied frequently will become featured categories, helping everyone discover products through a new set of genres, themes, and attributes defined by you and the rest of the community.”

Popular tags include Action, Adventure, Strategy, Multiplayer, and Shooter, alongside hundreds of others that have helped to shape and filter the entire platform.

Not only do tags make it easy for gamers to find what they want to play based on a categorized system, but it also allows up-and-coming developers and games to attract more attention.

While Steam provides an extensive list of verified tags for users to look through, LGBTQ+ was not officially one of them until recently.

Steam’s decision to add this tag provides more inclusivity within the various genres that are searchable on the game platform. The LGBTQ+ tag can be found on the Global Tag List and has over 150 titles already listed under it.

Online communities are, unfortunately, well-versed in bullying and harassment. Trolls often use tactics focused on racism, homophobia, and other forms of discrimination to target people.

Adding this tag raised some concerns over whether or not it was even worth it, given the possibility that people could turn the tag into something negative.

Despite this, a game developer called Yitz decided to be upfront and contact Valve regarding the possibility of adding the tag, which eventually saw it being implemented. The conclusion was that there are going to be rude people whether the formal tag exists or not, so developers who wish to use it should be able to.

Custom tags have allowed developers to add this tag to specify games with LGBTQ+ content; however, non-certified tags don’t offer the same capabilities as ones approved by Steam. In fact, the feature really doesn’t do much for games and developers unless it’s one of the hundreds of Steam-approved tags.

Not only does this allow players to find games under the tag much more quickly, but it also makes it simpler for developers to promote their creations, so it’s a win/win for everyone. 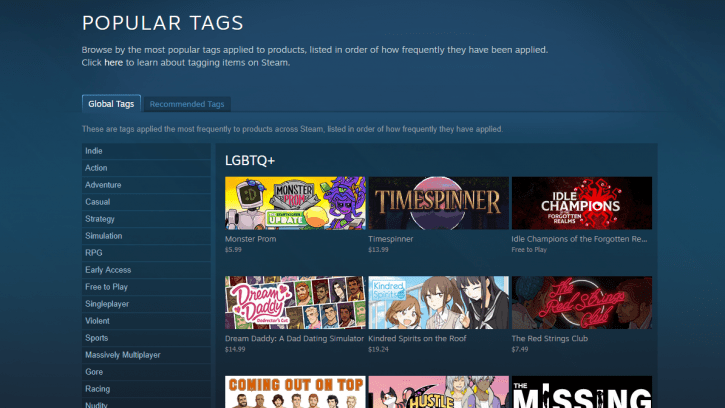 Jun 28, 2019 Audrey Schottelkorb 5520
The month of June is known as Pride month – a time when the LGBTQ+ community is celebrated around the world. This year during Pride month, a lot... 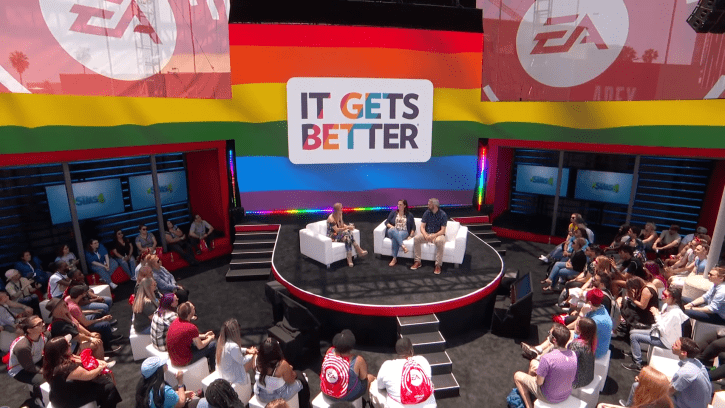 Jun 9, 2019 Audrey Schottelkorb 5490
What started as Gay Pride Day since the Stonewall riots in 1969, has fleshed out into what we now know as Pride Month. Every year, throughout the...