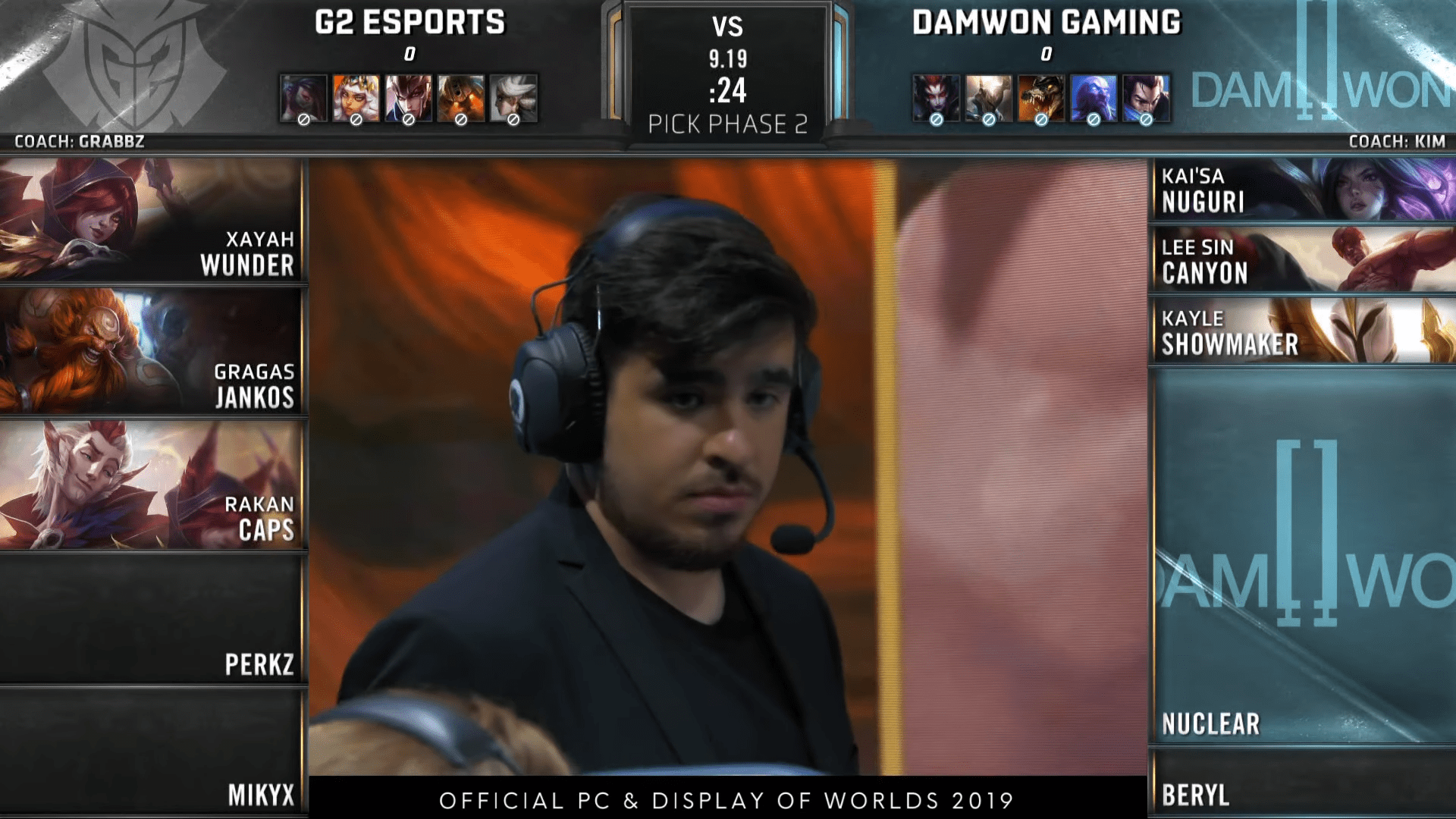 The second match of the second day of the Quarterfinals of the World Championship 2019 was between G2 Esports, Europe’s 1st feed, and last hope and Damwon Gaming, Korea’s 3rd seed.

While G2 Esports has been quite successful for the current year and consistent, Damwon Gaming went into a slump during the last weeks of playoffs in LCK Summer. Most analysts predicted G2 Esports to take it with a 3-0 or a 3-1.

Game 1. The Caps and Perkz show. G2 picked up Jayce/Gragas/Syndra/Xayah/Rakan while Damwon Gaming picked up Kayle/Lee Sin/Le’ Blanc/Kai’Sa and Leona. Both teams looked stacked with powerful champions capable of solo carrying the game. While the bot lane looked quite hopeful for Damwon Gaming, the jungle/mid duo of Caps/Jankos had too much of an influence on the game, rotating and roaming together to both top lane and bot lane to secure kills and objectives. Damwon Gaming put their eggs into the basket of the top lane in Kayle, but it was not deemed successful this time. Once G2 picked up the first and last baron, they were able to siege easily and end the game without any pressure.

Game 2. Bot lane Orianna did not succeed in shutting down Damwon’s Gaming bot lane. Nuclear played amazingly, just like game one, and secured a lot of pressure on the bot side of the map, allowing his team to roam around and get an aggressive vision in the jungle of G2. Caps & Perkz looked shaky during the second game, and DWG managed to secure all objectives with the except of 1 Elder Dragon and finish the game convincingly.

Game 3. After the first two games from Nuclear, G2 adapted their draft and first picked Kai’Sa for Perkz, while Damwon banned the other power pick attack damage carry, Xayah. Damwon’s bot lane looked very weak without the Kai’Sa and managed to get farmed quite heavily, ending the game with a combined score of 0/8/9.  Jankos stepped-up compared to the previous game and was a deciding factor in the win by feeding Perkz kills from the enemy bot lane.

Game 4. G2 did not replicate their previous draft with first pick Kai’Sa. Instead, they first picked Ryze this time, and Damwon responded with the Kai’Sa pick instantly, deciding that their bot lane is the lane that needs to win for them to succeed. While the Kai’Sa pick worked out tremendous and Nuclear managed to get bot advantage, Jankos completely outscalled Canyon by being present everywhere on the map, securing vision and objectives wherever he went. Combined with the roam from Caps on Yasuo, the mid/jungle duo secured the tempo and the win for G2,

While the community hyped up the rookies from LCK, Damwon Gaming, G2 Esports looked as strong as ever, coming after dominating both the Spring and Summer LEC Split and winning the Mid Season Invitational. The opinion is currently divided wherever G2 will be able to replicate their MSI success and defeat the World Championship Contenders in SK Telekom T1, tune in the Riot Broadcast during the next weekend to see the who will advance

Nov 6, 2020 Giorgio Delgado 4420
DAMWON Gaming took down G2 Esports in a dominant fashion in the 2020 World Championship semifinals today, getting revenge for being eliminated during...

Oct 18, 2020 Richard Sebastian 3170
The 2020 League of Legends World Championship has been cutthroat between the European and Asian regions. With just one more quarterfinals to be...