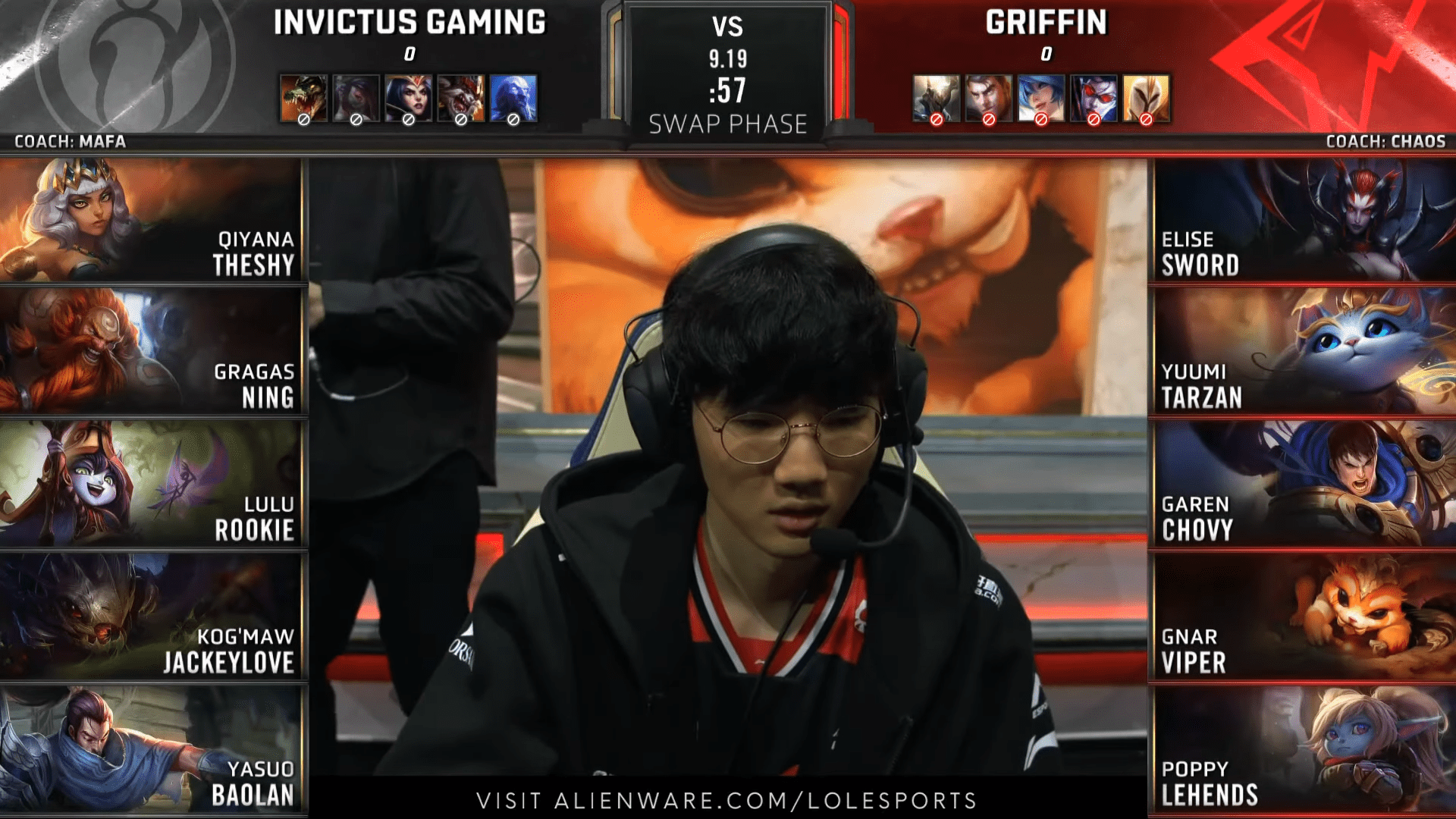 While there is some drama regarding Griffin (for more details, check out the recent articles on the website), most pro-players, casters, and analysts predicted Griffin to advance after seeing them dominate their group.

RELATED: Valorant's Next Open Tourney Is This Sunday With A $1,500 Prize Pool Up For Grabs

Game 1. Invictus Gaming prioritized Rookie’s signature pick Qiyana and Ning’s comfort pick on Gragas. Griffin picked the infamous Garen/Yuumi bot lane alongside Elise for Tarzan and a surprise tank poppy in mid lane as a counter pick to Qiyana. While the Poppy was a pleasant surprise by Griffin, Invictus Gaming had their ace in their sleeve in Kog’maw as a counter to Garen/Yuumi. Tarzan picked up kills left and right on his Elise, while his counterpart Ning tried to do some ganks but was mostly unsuccessful. Kog’maw grew quite strong and after a free laning phase, and Griffin could not deal with him, two barons and one Elder Dragon later, and Invictus Gaming snatched the first win of the series.

Game 2. The draft had a similar pattern, signature pick for Rookie, comfy pick for Ning by Invictus Gaming. Griffin meanwhile went for the power picks for bot lane in Xayah/Rakan while putting Chovy on tank duty for the second game in a row. While bot lane and jungle from Griffin was playing well, the top lane was getting completely out-skilled, and with Chovy on tank duty, Griffin couldn’t do anything. Invictus Gaming was playing very well, forcing objectives only when needed and giving time to TheShy’s Kayle to scale and carry the game with his split push. Two barons later and Invictus Gaming takes the game.

Game 3. Griffin started the draft by giving away Qiyana again, but this time they picked Sion for Chovy against her in the mid lane, third game tank duty. Something changed within Griffin; they managed to secure their first win and keep up the best of five series alive. The only downside was that the top laner for Griffin got outclassed for the third game in a row.

Game 4. Similar draft as in Game 3, where Griffin picked up their first win, except top lane Kayle, was replaced by Jayce, and Karthus replaced the jungler Elise. Invictus Gaming prioritized Kayle during the early drafting phase for TheShy. While Griffin showed some signs of life, TheShy suffocated top lane and demonstrated why he won the World Championship previous year.

Overall, the series was quite disappointing because Griffin had a rookie top laner, Doran, on the bench who proved during the LCK split that he deserved to be on the main roster. Even though Griffin’s topside was getting exposed, even in their only win, they did not sub out the top laner for Doran to prove himself on the World Stage.

RELATED: Uzi Announced His Retirement From Professional League of Legends Due To Poor Health

Invictus Gaming showed progress after the Group Stage, where they looked quite weak and unprepared for their opponents. If this trend continues, they might get their second World Championship quite soon.

Festival of the Lost, Destiny 2’s Annual Halloween Event, Brings With It Spooky Rewards And Events

May 17, 2020 Giorgio Delgado 3550
Griffin is “discussing contract termination and other options” for its players following the team’s relegation from the LCK, the...

Jan 14, 2020 Giorgio Delgado 4890
With the offseason coming to an end, Ucal's fate was unclear to many. After a high season on Afreeca Freecs, where the team massively improved...