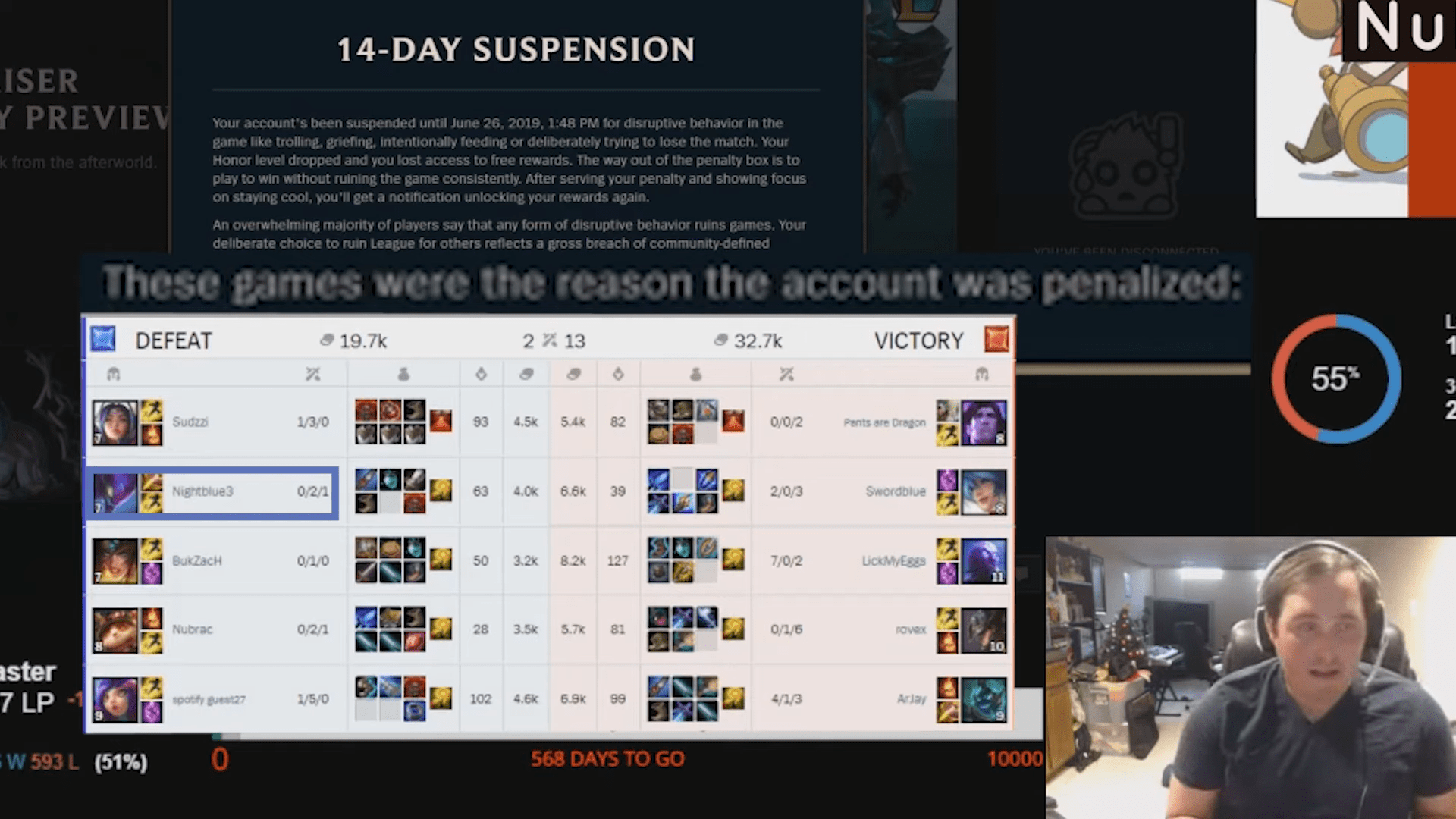 League of Legends is a team game, supported by roles and lanes that have been shaped by a specific meta. While going against the meta can be rewarding, there’s a fine line between a quirky pick and just plain trolling.

His strategy consists of taking Teemo mid-lane early on instead of going bot-lane with the ADC, as is typical. Since this steals experience from the mid-laner and leaves the ADC to fend for themselves in a 1v2 situation bot-lane, most players can agree that his attempt to “redefine the meta” isn’t very effective.

Because of this, popular streamer Nightblue3, who was playing jungle during the match, chimed in to let Nubrac know that he would be getting a “2 week vacation” once he contacted his “riot friend” regarding Nubrac’s gameplay.

The exchanges between Nightblue3 and Nubrac all played out onstream for viewers to watch, including the moment that Nubrac was given a 14-day suspension for that same game.

The League of Legends community has been back-and-forth over the incident, with the majority agreeing that while Nubrac was trolling, Nightblue3 and Riot Games didn’t handle the matter appropriately.

Players are bothered by the fact that Riot Games may have unjustifiably banned Nubrac, especially if he was suspended based solely on an unconventional report from a well-known streamer.

Following that drama, which was just finally dying down on social media, Nightblue3 shared a tweet on Twitter captioned “JUST GOT A 2 WEEK VACATION” along with a snippet of his own 14-day suspension.

Below the suspension information are the chat logs from the games he was banned for, with Game 1 recognizing comments he’d made at Nubrac.

JUST GOT A 2 WEEK VACATION pic.twitter.com/ByLtmAcRPp

While many popular streamers and League of Legends pro players seemed to side with Nightblue3 during the initial drama, much of the community has responded with amusement at the suspension.

Based on responses directly to the Twitter post, many players seem to be in full support of NB3’s temporary ban. As a streamer and Youtuber who has been known to play off-meta and troll picks, as well as AFKing games, Nightblue3’s suspension wasn’t exactly unsurprising.

When it comes down to it, playing off-meta isn’t a ban-worthy offense, but flaming and creating a toxic environment in-game is, which ultimately resulted in both players receiving suspensions.

It’s unclear whether or not Nubrac was banned strictly because of the involvement of Nightblue3’s “riot friend”, however, screenshots have shown conversations linking the two together. Because of this, players wonder if NB3’s suspension stems from Riot Games attempting to redeem themselves for how poorly everything played out.

Either way, moving forward its likely that Riot will do their best to keep these incidents to a minimum as they set their focus on producing fresh content for the game.