Epic Battle Between Monster And Giant Mech Armor On Fortnite: Who Wins The Fight? 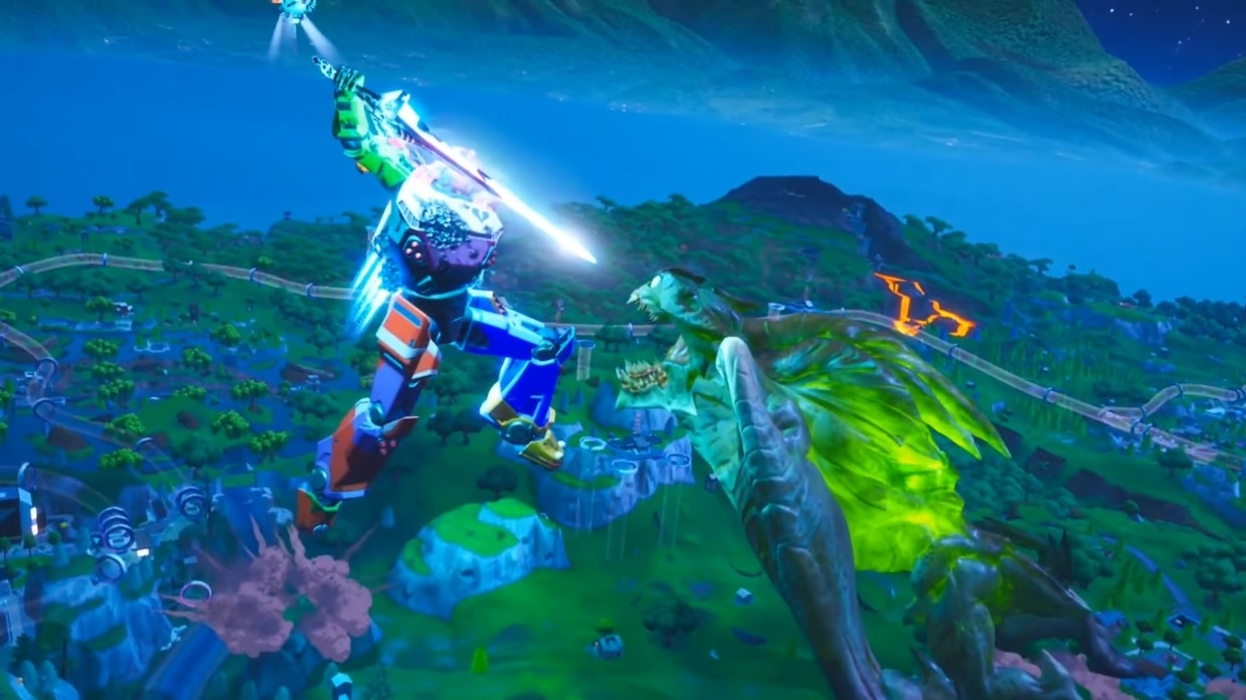 An epic battle between the frozen monster and a mech armor can be seen in a video uploaded on Twitch.

PC Gamer uploaded a short clip that shows a bird’s eye view of the whole fight. Perched on the safety of your jet backpack, you can see for yourself just how scary this monster is.

The monster has the ability to spew some kind of radioactive projectile, which quickly brings down the mech armor. But that’s not enough to kill the robot. After it stands up, it drags the monster by doing a WWE move and carries it a few miles backward. They all into the ocean.

After a few seconds, the mech warrior emerges. It seems the monster has been defeated. Or has it?

The monster then jumped from behind and blindsided it with furious attacks. It clawed and bit, creating sparks all over and the other arm falls off. The robot manages to free itself of the monster, but it sustains heavy damage.

As it kneels to the ground, it manages to take hold of what seems to be a powerful orb. He crushes it and releases a massive amount of energy. He then uses that orb to punch the monster, which survives the attack.

The robot then takes out a sword and stabs the monster right on the head. Of course, a win would not be complete without a victory dance.

The mech robot has been constructed inside a volcano in the leadup to Fortnite Season 10. The face seems to be inspired by the creepy pink mug of the Cuddle Team leader. The giant robot seems to be the residents’ response to the Kaiju that has been seen swimming around the island. The monster was trapped in ice for a long time but has since been unfrozen.

Even back in Fortnite Season 9, people were already anticipating the epic battle of these two. Think Pacific Rim or those Mecha Anime shows that pit mecha robots with giant monsters.

These kinds of epic launches are not new to Fortnite. The game has a habit of springing a treat for loyal fans. Who can forget the Marshmello concert you can watch in-game? How about when the whole island was covered in snow and zombies courtesy of the Ice King?

You can watch the whole clip on the Twitch channel of PC Gamer. The anticipated fight might have been short, but it was no less sweet.

What On Earth Is The Arcturus GPU Silicon And How Can The Architecture Be Used?

Dec 22, 2020 Chris Miller 3470
Among Us is now the most popular game ever, in terms of monthly player base dwarfing everyone else by a monumental margin. Roughly half a billion...

Dec 2, 2020 Jeremy Green 5560
Fortnite is a free-to-play battle royale known for a lot of things, from regular updates to themed content. It's also a game that has a huge list...

Dec 1, 2020 Harry Alston 9740
If there's one thing Fortnite gets right it's the live events. Peaking at 1.5 million viewers on Twitch and with the excitement I could hear from my...