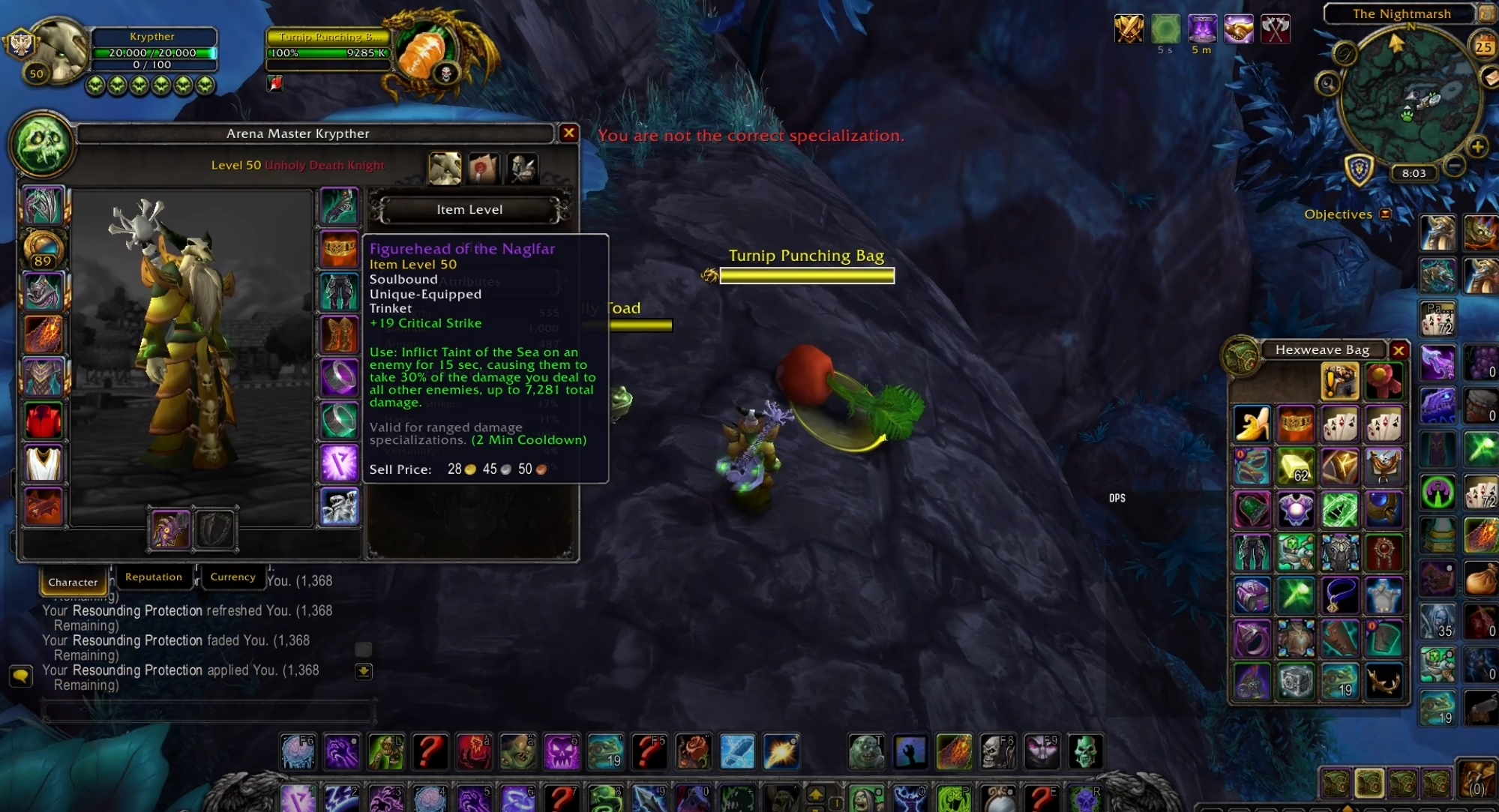 World of Warcraft is massive, with thousands upon thousands of items and effects. Sometimes, a player finds a way to take some of those items and combo them in a ridiculous way to achieve unreasonably strong results.

At this point, World of Warcraft YouTuber Rextroy has become the bane of a Blizzard developer’s existence, finding the smallest and seemingly most obscure items to render himself into an unstoppable force – even turning himself into a nearly-literal raid boss at one point using leech mechanics.

RELATED: Infinity Ward Multiplayer Director On If Call Of Duty: Modern Warfare Will Have A Battle Royale Mode

His latest trick was uploaded to YouTube today, showing a new strategy by utilizing an older trinket. In doing so, he manages to drastically increase the amount of damage that he inflicts against an enemy – enough to one-shot a geared, max-level enemy.

The trinket in question is from the Legion expansion, two expansions ago now. Dropping from the boss Helya in the dungeon The Maw on any difficulty, the active ability of the trinket is what makes this possible.

RELATED: Twitch Views For Borderlands 3 Drop 93% A Couple Of Weeks After September Release

Activating the trinket’s ability inflicts a debuff called Taint of the Sea on your target for 15 seconds. This causes them to take 30% of the damage you deal to all other targets, capping out at 7,281 damage in its current tuning.

The latest @Rextroy3 video shows how a trinket from Legion can be used for massive damage in the #Shadowlands pre-patch! #Warcrafthttps://t.co/hpv0frqSkppic.twitter.com/IVHhXXntCT

Rextroy uses this ability by inflicting heavy damage to a low-level critter – a toad, in this case – which immediately transfers the damage cap of 7,281 to the target that the player has inflicted with Taint of the Sea.

This isn’t the entire combo, of course – a well-geared warrior, for example, has about 21,000 max hp after the gearing squish, so the trick would only do about a third of what’s required. Rextroy uses this trick with a hunter, combining it with a variety of talents and abilities.

The end result – combined with an engineering product to turn invisible and feign death – turns the player into a swiftly-disappearing one-shot sniper, all but deleting an opponent before disappearing again into the shadows.

RELATED: Thanks To The Humble Bundle Store, You Can Get The PC Thriller Gone Home For Free

This is another fantastic trick found by Rextroy to show how flexible a meta really is and how far one can push the game. Unfortunately, it’s also a trick that might not exist for long – Blizzard tends to nerf the tricks Rextroy shows off as they’re often based on unintended consequences or unforeseen abilities on Blizzard’s part.

Still, we likely won’t have to wait too long before the next auto-delete trick Rextroy comes up with, even if we end up seeing it removed before too long. It’s unknown if this trick works on non-hunters, but if you want to give it a try, you might be able to deal more damage than you thought possible!