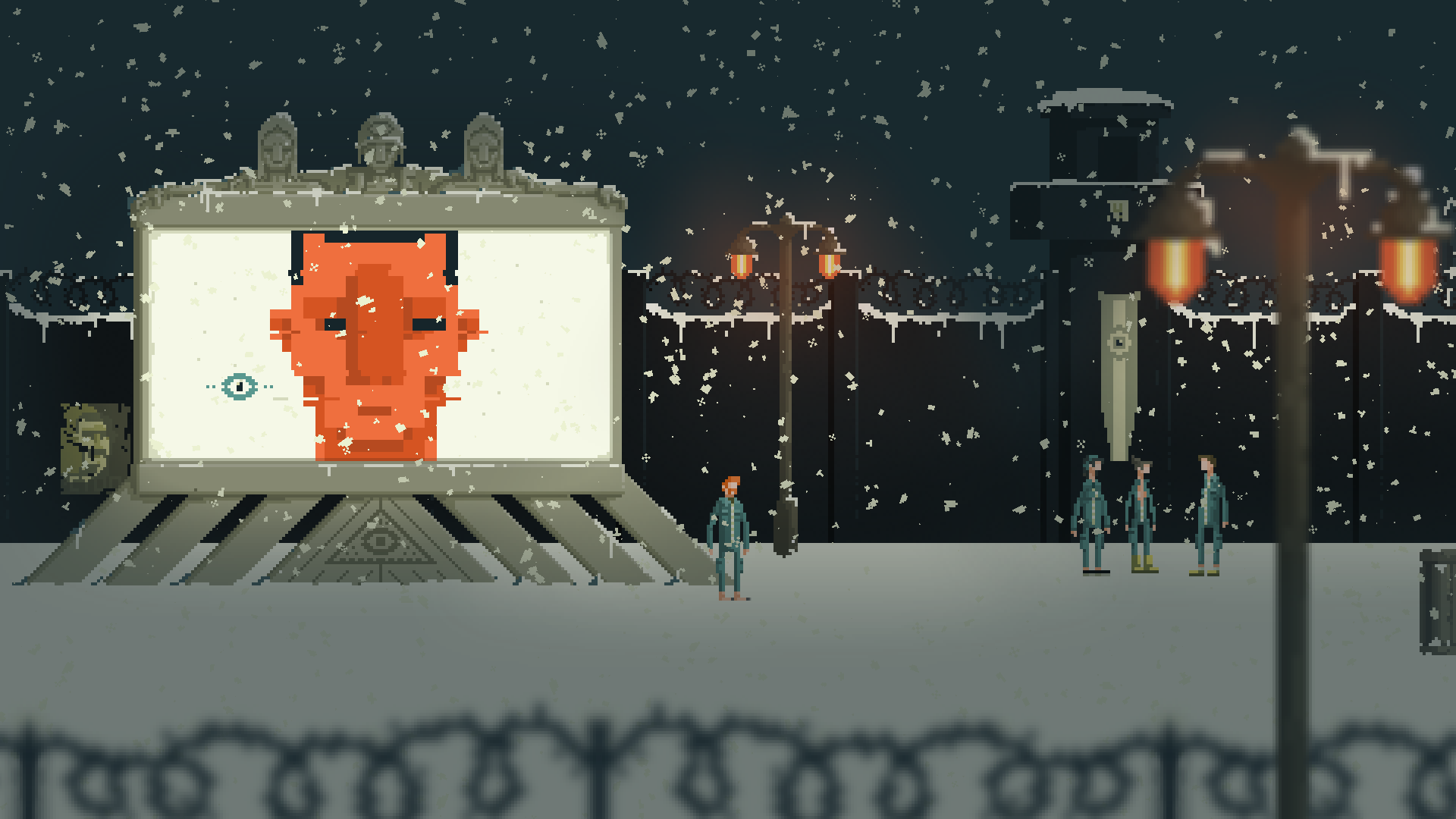 We’re a mere two days from Ministry of Broadcast coming to Steam in what appears to be heaping plate of dystopian humor coupled with razor-sharp dialogue and copious amounts of death.  The hype that has been slowly building around this title appears to be well-earned; Ministry of Broadcast has already amassed seven different awards from indie-centric showcases, ranging from accolades of their storytelling to art style, and near everything in between.

The premise is simultaneously outlandish and near-believable; you must cross a wall that divides you from your family.  To do so, players fight for their lives against each other to all earn the ability to cross the wall in a government broadcast television show. There can only be one winner, and players are tasked with ensuring the red-headed protagonist is the one.

It’s a satirical title that pokes fun at governments inability to rule beyond gaining absolute control of its citizens, similar to George Orwell’s 1984, and Joseph Hellers Catch-22.  From walls laden with posters reminding all of the Regime’s heavy, seemingly omnipotent rule to massive monitors reminding citizens of the Regime’s will, the developers didn’t tip-toe around the premise of dystopia.

The Wall divides a country in two, and a man from his family. To reach them, become a contestant on "The Wall Show". But the promise of freedom is not always as it seems.

With the title on the cusp of release, I managed to get a hold of the developers to ask some burning questions to tide fans over until Ministry of Broadcast finally releases for everyone to play on the Steam platform on January 30th, 2020.

We are ONE. We’re all Skywalkers. The core team members of the studio are Petr Škorňok, Petr Melicherík, Dušan Čežek, and Sanja Čežek.  Plus some extras like Benjamin McCulloch, Emil Gašparec, Jiří Huška, Melike Huška. Ah yes, we always forget about Marko Stanojević. He is still locked in the basement animating different endings.

We have spent two years on the project. The first year was part-time or after hours for us with occasional conference visitations. The second year is the one when we got fully funded and the whole team could spend full time working on the game. Exciting times.

The game will be released this week actually, 30.01. on STEAM, GOG and UTOMIK for PC and macOS. During the spring it will appear for Nintendo Switch in the digital and physical form.

The game is not set at any time or place. Interestingly,It is interesting that each part of the world can recognize their own wall. For people in Europe this game is about Berlin wall or Brexit, for US it is about Mexican Wall, Asia has its own walls, someone sees China, other North Korea… … I guess everyone can easily identify with the Ministry of Broadcast topic since building walls is part of human nature.

We also didn’t want to portray any exact regime, just the fact that it is absolutistic at its core. We took capitalism and communism and we just stripped them of their colors and marketing position. What we got is actually the same regime at its core and ideology. Oppression works the same way and it speaks the same language all over the globe. Esperanto of ideologies.

We are not sure if 1984 is part of mandatory school literature or European civilians are having some inner drive to read this book, but it happened that everyone we were in contact with, or worked with, already knew each part of the story. For us it was not something we insisted on since the game is only set in the “Orwellian” world and the Ministry of Broadcast story and game design are original. We combined stuff we enjoyed watching, playing or reading into one story.

For us, a strong narrative was something we insisted on. We wanted to implement our own thinking, type of humor, feelings, and points of view. We wanted to explore this topic the same way we explored the game making (since this is our first game as a studio) and learn along the way.

We ended up with Ministry Of Broadcast, a narrative platformer tackling a lot of serious topics through sarcastic and Pythonish humor.

In the game, The Crow evolved from a simple NPC that was supposed to mock you, into full-fledged character with its own personality, moods, and backstory. It made sense because stranded people tend to bond with animals or inanimate objects like Wilson in Cast Away. Thus our protagonist created this love/hate relationship with a crow reflecting the player’s mindset and thoughts.

Crow represents all of what he is not. She can fly away anytime, she is speaking her own mind and she is in control of her own destiny.

Regarding (her social media presence); given how controversial the game could be, creating our own enemy, was a strategic move. It helps the players and an audience understand that we’re willing to mock not just others but also ourselves and the core of the game is an amusement, not pointing fingers at anyone because the world is not black and white, but 50 shades of grey.

How does the world on the other side of the wall look like?

Note: This interview was edited for grammatical parity with the article.