Thankfully Marvel’s Avengers has failed to impress almost anyone; it looks like it would have been a solid offering five years ago with the graphical fidelity in the omnipresent loading screens and microtransaction-laden title while you’re rooting through your inventory every two minutes, but it has failed to impress even considering that it’s a beta.

This gave multiple gamers a massive sigh of relief that they won’t be missing out on anything spectacular after the irritation that was Sony announcing multiple pieces of content for the same title being exclusive to one platform, the PlayStation.

Word has leaked out that Sony and/or Square Enix actually went to third parties, requesting a sizeable chunk of change in order to offer other platforms the same content; the high-price resulted in a bit of backlash as everyone opted out of the deal.

Somehow, fans of the PlayStation are looking at this as a victory for their console of choice; a notion that is baffling to many that shows an inability to understand the finer nuances of marketing.

Much like how Guerrilla released Horizon Zero Dawn to other platforms and stated that they hoped everyone will buy a new PlayStation 5 to take part of the next segment of Aloy’s journey, it simply smells of not understand precisely why users have specific consoles and preferred platforms in the first place.

It reeks of being unable to comprehend your primary demographic in such an outlandish way that, written a little different, could easily be mistaken as satire.

Yet PlayStation owners are celebrating the exclusive content, which further cements in the eyes of Square Enix (at least) that they’re on the right track regarding gated opportunities and content while everyone paid the same price.

1. pre-order Marvel's Avengers on Amazon (PHYSICAL only, Amazon will not charge you).

2. Redeem beta code at https://t.co/wrH7kKeYu9 (code should come into your email within 24hrs, make a SE account in the meantime)

This is going to be hallmarked as the tip of the iceberg in the newest disastrously childish console wars, where merit and competence is only gauged on whether or not you begged your parents for the right form of gaming platform, and it’s been an absolute industry cancer that has stymied players consistently in simply trying to play video games.

Which, if we’re not mistaken, is actually the underlying cause of playing video games.

That PlayStation Advantage branding that Marvel’s Avengers has smothered over itself, to the point that it almost hides the inspirational gameplay, is just getting warmed up. Maybe console exclusive titles will finally die a fiery death, kicking and screaming the whole way down while console owners literally cry on Twitter, but there’s a new burgeoning stage that PC owners will need to deal with in the interim. 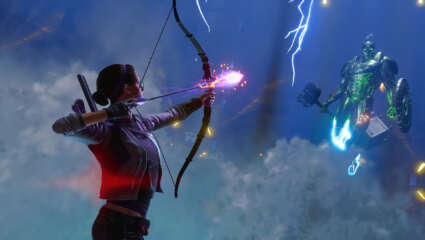 Nov 19, 2020 Dylan Duarte 2990
Kate Bishop, the protégé of Clint Barton, aka Hawkeye, is on her way to Marvel's Avengers in the Taking AIM DLC. The title has a double meaning,...

Nov 6, 2020 Chris Miller 38810
Absolutely no one could have predicted this: the games as a service (GaaS) plan of Marvel's Avengers, where players are expected to continue to...

Oct 24, 2020 Kevin J. Kessler 5580
Super hero games have been having a bit of a renaissance in recent years. Games like the Batman Arkham series and Marvel's Spider-Man have spoiled...